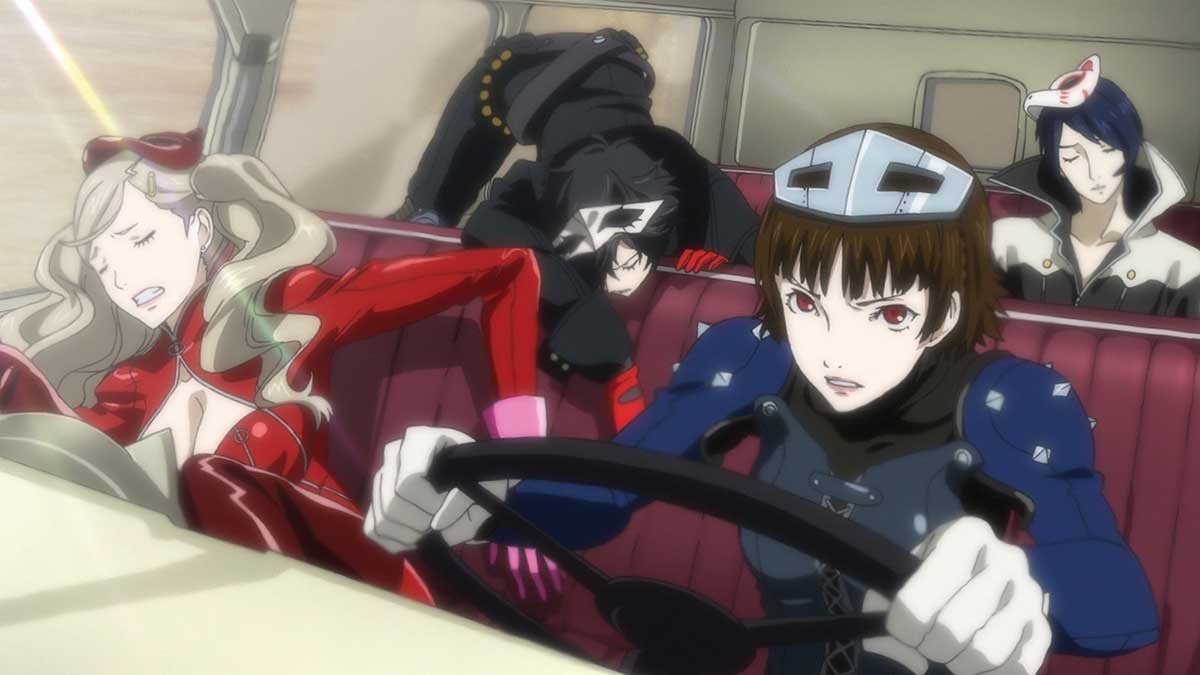 Though the Megami Tensei and Persona series have been telling stories about teenagers’ dealings with the supernatural for more than 20 years, Persona 5 is the first game in this franchise to truly be about being a teenager. These games traditionally involve Japanese high schoolers in peril, and most have been written with a maudlin, tenuous grasp of actual human emotions. What one can feel radiating off of this game isn’t an evolution of ideas stemming from that pubescent series, but from Atlus’s very-much-adult one-off puzzle title Catherine. Persona 5 allows itself a level of emotional candor about the real world’s problems, and those problems follow and influence what its teenage characters find waiting for them in other dimensions.

The setup here is that the player-named protagonist is a high schooler who unexpectedly finds himself on the ugly side of the law after playing the good Samaritan during an attempted back-alley rape by—unbeknownst in the moment—a high-ranking politician. The protagonist is convicted of assault, given probation, expelled from his current school, sent away to live with a particularly irritable family friend, and go to a new school in Tokyo, where news of his criminal record has reached the gossipy and judgy student body ahead of time. For the first hour of the game, life is mostly about keeping your head down and eyes forward, making dialogue choices that won’t land you in hot water, until one night, in dreams, you’re whisked away to a Lynchian velvet prison where Igor, a Persona series mainstay, gifts you with the ability to enter the Metaverse, a dimension entirely created by the distorted wants and desires of humanity, as well as the ability to call upon your Persona, a physical manifestation the user’s own sense of rebellion.

It’s strange that it’s taken so long for the Persona series—which, again, has largely focused on teenagers—to truly embrace rebellion as an overarching theme, though arguably, despite tackling heavy topics like teen suicide and gender identity head-on, hard and fast reasons to question authority have been thin on the ground until now. Here, the cold, concrete ugliness of the world is in your face at all times. It’s a world where surprisingly lurid tales of perverted teachers, unabashed plagiarists, domestic abusers, government corruption, and cruel capitalists are legion. In the Metaverse, the evil that men do is made nauseatingly surreal, with the game’s dungeons elaborately and imaginatively crafted as very literal palaces of avarice, lust, and hatred.

As such, rebellion here is a defiant shotgun blast of friendship, beauty, joy, and justice against an overwhelming tide of negativity. Persona 5’s entire user interface is a visual riot of typography and graphic design that somehow pairs perfectly with the game’s soulful acid-jazz musical identity—elegance moshing with utter chaos as the game creates the tableau for its heroes: a protagonist and his fellow teens finding themselves beleaguered by the various indignities and injustices around them, becoming infuriated enough to invoke Personas of their own and unleash every repressed urge to fight the power. The students eventually band together to become The Phantom Thieves, stealthing their way into the aforementioned palaces, finding the grotesque distorted versions of the unjust, and stealing their horrible desires away from inside the mind like a loose, psychotropic retelling of Inception.

The actual RPG at the heart of Persona 5 is deceptively simple, not terribly dissimilar from Pokémon. Combat is a system of finding enemies’ elemental weaknesses, and exploiting them to their fullest with each and every turn. The game, though, stands apart due to how the fights go down: as exuberantly hyper-visual sequences that invite players to dance their fingers across all the buttons of the controller instead of the staid mechanical up-and-down battle-menu selection of the vast majority of turn-based RPGs. Melee attacks blend seamlessly with gunplay, which, with additional skills, can transition right into the next character’s turn, which can then switch to the magic attacks of the Personas in an always-moving Moebius strip of comic-book splash-page greatness. The protagonist is also able to contain more than one Persona, and for the first time in quite a few Persona titles, he’s able to negotiate with weakened enemies to gain their power, though it’s a process that isn’t as well-handled as it could be, with many of the dialogue choices suffering from the Undertale problem of attempting dry humor, and ending up simply obtuse.

The other side of the game involves time spent out of the Metaverse, where you’re just another teen with classes to go to, homework to do, and relationships to forge under a somewhat stingy time constraint. This aspect of these games was always something of a baleful chore, but it has import and depth here by just how much impact forging relationships and living a full, well-rounded life can have on the more mechanical side of gameplay. That said, there are vestiges of the series’s traditional twee sensibilities scattered about, and there are some brow-raising questions to be asked about a few of the protagonist’s relationship options. One particular plot thread has him getting emotionally involved with one of his teachers, a plot that just barely gets away with it by playing out less like Van Halen’s “Hot for Teacher” and more like an anime written by Miranda July. This is par for the course for the game’s weaker plot points, the occasional nosedive into frustrating territory rescued by the strong emotionally honest core that the game spends so much time building along the way. Overwhelmingly, Persona 5 excels at creating a familiar, refreshingly honest look at the internal struggles that plague teenagers the second they awaken to the world beyond their own myopic id.

Persona 5’s big problem is the same that affects millennials in reality: the fear of missing out. Time is a valuable resource in the game, where every Palace has a deadline by which the owner’s treasure must be stolen, but even out of the Metaverse, an active social life with blow up the protagonist’s phone all day, all offering different activities and story branches that deepen what players know and want to know about its confidants. The constant juggling act of priorities can be overwhelming, and there’s a nigh-obscene amount of it, with a typical playthrough stretching into the realm of 100 hours. Rarely does it feel like Persona 5 offers enough time to see everyone, do everything, be everywhere, and the game’s penchant for sticking players in chunks of developing story for several in-game days without the ability to head out on your own doesn’t help, though still feeling like the game has more to offer even as that save clock gets into the triple digits is a great problem to have.

It helps to think of Persona 5 as the Greatest YA Novel Ever Told, a year in the life of a ragtag bunch of social miscreants trying find a true moral north before they reach adulthood, punctuated by chapters of outrageous, stylish heroism that the world outside their clique can only barely conceive. Its Atlus’s watershed moment—which is to say, the moment they allowed the Persona series to truly grow up and earn that “M for Mature” rating.