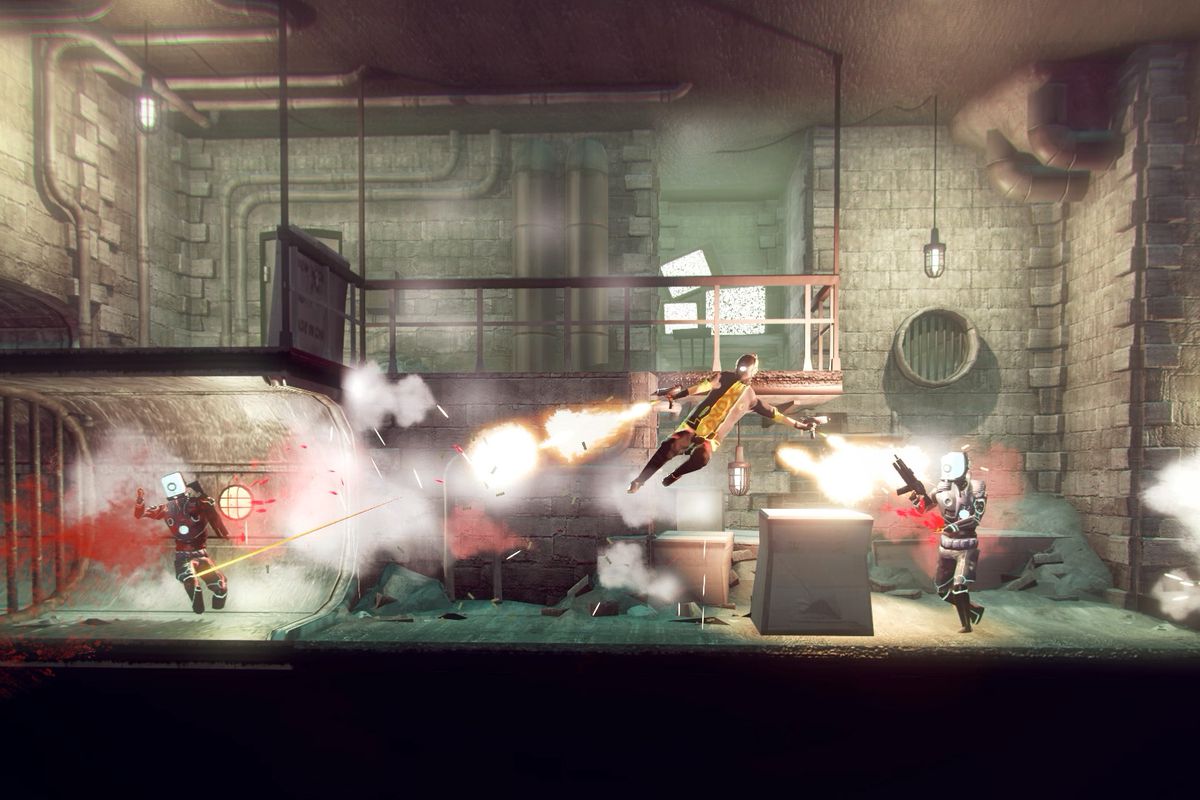 Bollywood’s charm lies in the sheer melodrama and absurdity of its films, which typically feature heroes taking arms against foes in lurid fashion. The industry’s influence on My Friend Pedro, a shoot ‘em up from Swedish developer Victor Agren’s DeadToast Entertainment, is certainly unmistakable. Indeed, you’ll feel like a Bollywood strongman as you mow down mobs of henchmen in spectacular ways as the game’s unnamed protagonist, with Pedro, your chatty banana companion, cracking wise by your side.

Each level of the game is presented as a 2D platformer, and there are unbounded thrills to be had in making it through each area, from ramming through a plate-glass wall into a room to gliding down from an overhead cable to the story below. As you caper across abandoned buildings and deserted rooftops with an array of firearms at your disposal, you’ll pump your enemies’ guts full of lead as the dizzying electronic soundtrack—redolent of a neo-noir film—slickly complements the carnage. And because you have to plan your moves in advance, it’s almost as if you’re choreographing that carnage. Every shootout is an opportunity to execute a thoroughly balletic performance of sorts. And with more points awarded for intricate stunts, there’s a huge incentive to bring as much pizazz to your violence as possible.

How you carry out all these stunts is dependent on your creativity and skill, with players equipped with an arsenal of Bollywood-esque combat techniques. Among these is a nifty trick called split aiming, which lets you wield a pair of guns and shoot two targets at the same time. You can also perform an elaborate somersault in midair, all while raining bullets down on the targets below you. Even conveniently placed objects, like a frying pan laying on the ground, can be used to pull off even more outrageous stunts. The pan, for instance, is an especially useful weapon against hard-to-reach mobsters: Kick it into the air and fire at it and your bullets will ricochet off its surface and right into nearby enemies.

In later chapters, My Friend Pedro points to a more profound narrative beneath its silly veneer, weaving in clues to the protagonist’s depression as well as a twisted backstory. There’s an entire chapter devoted to his crumbling mental state, with the player traversing through a hallucinatory dreamscape painted in pastel hues, all as quirky, floating figureheads and soft doughy clouds dance about. The shift in tonality is jarring, but there’s a pleasant self-awareness to My Friend Pedro as it shovels cartoonish levels of elegant violence at the player. Later chapters even see the game breaking the fourth wall to poke fun at you. In one instance, you’ll be laying siege upon a crew of white brutes known as hardcore gamers, whose soundbites consist of familiar gaming lingo like “Git guud noob” and “GG.”

Throughout, you can dramatically slow down the pace of combat, and you’ll feel like Neo from The Matrix as you leap off an impossibly tall skyscraper, fending off hordes of enemies falling alongside you. If the slow-motion gunplay makes such feats easier to pull off, there’s more challenge in mastering the controls that allow you to split aim, wall jump, and somersault. That gameplay may be limited in the end, but the violence in My Friend Pedro is so hyperbolic and varied—at one point, you’ll find yourself doing backflips on a motorcycle in order to avoid a barrage of bombs—that you’ll be gunning to repeat levels in order to best your high score. It’s mayhem that speaks so strongly in the language of the Bollywood action film that the only thing you may be left wanting for is the wisecracking Pedro to do a song-and-dance routine once the curtain comes down on your adventure.

The game was reviewed using a review code provided by Tinsley PR.