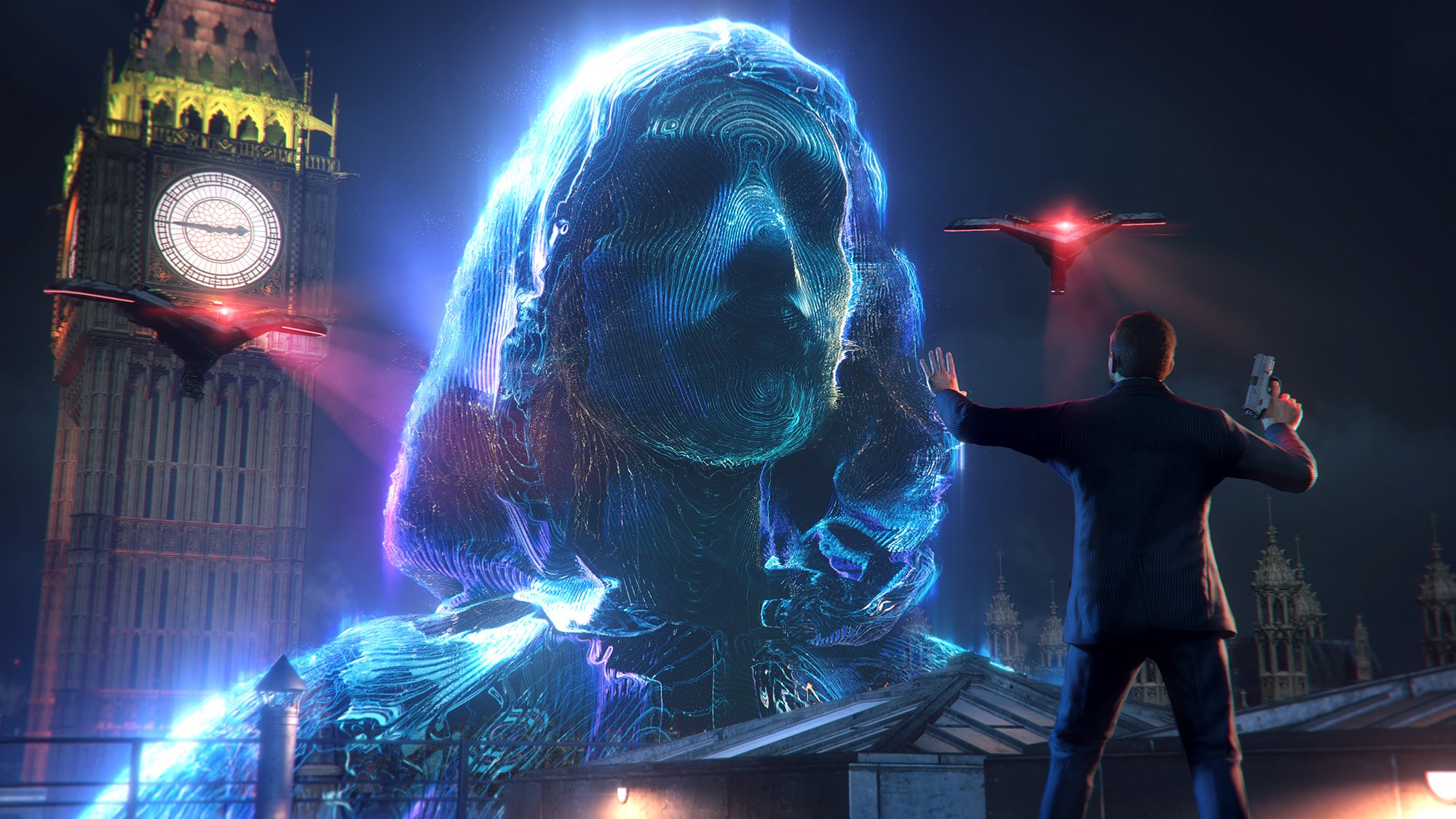 True to its name, Watch Dogs: Legion has no one protagonist. Early on, the game presents a list of random, regular Joes, asking you to choose one to restart hacktivist group DedSec. From there, you quite literally recruit characters off the street. Where prior Watch Dogs games let you pull up the personal data of any bystander, like their jobs and interests, Legion also lists what the people you encounter can bring to the table: their vehicles, weapons, and skills, like calling allies or knowing how to take a punch. Once you complete a mission to convince a chosen person to join the ranks of DedSec, they become totally, fully playable throughout the game—one more out of a potential many to join the fight.

It’s a premise that bursts with potential but is immediately poured into the familiar mold of Ubisoft open-world video gaming, right down to its toothless conception of near-future London as a dystopic police state. Like so many video games (and like many other Ubisoft games, for that matter), Legion employs a setting of unrest and political upheaval, selling itself on fashionable, exciting imagery of conflict and revolution. But such settings are often designed less for commentary than simple narrative convenience: as environments within which to take on hordes of designated enemies, and with zero qualms.

Most glaringly, the police state in Legion isn’t run by the regular police. In the aftermath of terrorist bombings falsely attributed to DedSec, the private military corporation Albion has been given free reign over Britain. They set up checkpoints, administer beatings in the streets, accost passersby for random ID checks, and openly carry lethal weapons. This allows the game to trade on what is, at a glance, the sight of people resisting the police and military while giving fascist goons a degree of remove from any recognizable institutions, obfuscating the chain of command to the point where the most visible bad guy is just the head of the PMC. DedSec’s goal is to restore a largely unexamined status quo, as characters do things like deride Albion for plastering holographic propaganda over, horror of horrors, Buckingham Palace.

Though some characters specify how Albion often specifically targets immigrants, Legion broadens the question of oppression to a point that becomes meaningless. You can recruit anyone because everyone is under Albion’s boot, and with the finger pointed so consistently at DedSec, the game’s conception of a repressed class essentially becomes DedSec hackers in particular, as you’re less targeted for your gender, skin color, or immigration status than for your ability to do cool hacker shit like hijack security cameras or make cars move on their own.

And yet, the bald appropriation of struggle and revolutionary iconography is hardly surprising. With so many millions of dollars at stake, how can a corporation afford to co-opt social justice in anything but the most brainless, superficial fashion? After many, many, many hours of playing Legion, the story doesn’t provoke ire so much as a feeling of resignation, given how it settles into a dull hum of mediocrity as it blunders through the obligatory topics of extra-judicial drone strikes and human consciousness beyond bodies.

What softens the blow, at least, is Legion’s undercurrent of absurdity. With so much of its cast at the mercy of character randomization, you spend a lot of time staring at a growing array of unfortunate haircuts, inexplicable ages, and ill-fitting voices. Though there’s a decent amount of diversity in terms of ethnicity, many of the faces (particularly the women) look so similar that they wouldn’t seem out of place in a family portrait, while everyone exhibits little meaningful variation in body type beyond being elderly or not-elderly.

It’s difficult to escape a sense that the game’s ambition far outstrips the number of unique people it can plausibly render. There’s also amusingly little pretense about characters summoning vehicles, drones, and allies out of thin air; if you’re playing as a spy, her car with a cloaking device and missiles is only ever a few button presses away. These weird, messy parts of Legion are far and away its most distinctive, such as the way a middle-aged construction worker with a baffling granny voice to hop aboard the flying cargo drone she can pluck from the ether and ride straight to the upper levels of a restricted area.

But like the initially appalling story, you soon grow accustomed to the same few displays of absurdity because there’s little variety to be had in Legion’s version of London. Each mission is a similar, stealth-viable map of cameras to jump between and vents to infiltrate with a small, discrete spider robot. Though you can commit to engaging with the clumsy, unsatisfying combat system every so often for variety’s sake, the game is so long that it runs out of different approaches long before the locations begin to repeat and the mission design begins to favor hordes of hostile enemies regardless of how stealthy you’ve been.

Worse, the characters have no meaningful sense of progression. Operatives don’t develop skills through repeated use, which may ensure that new recruits are viable from the jump but also prevents people with less immediately applicable skills from bridging the gap. If one guy only has a police contact for reduced arrest times, he’ll never grow to do more damage, carry more gadgets, or hack more quickly; he will always be less useful than, say, the construction worker or spy—good only to keep in reserve if you somehow manage to get every other operative arrested, hospitalized, or (with the permadeath option on) killed. What upgrades you earn are cross-character abilities like jamming enemy guns or more ammo for the nonlethal shotgun.

Sometimes characters have hard-wired flaws like taking more damage or hiccupping to alert guards or even spontaneously (and inexplicably) dying, but the game rarely forces players to deal with such flaws. There’s no calling for help from anyone nearby and being stuck with the drone expert who’s useless in a fight or the clerk who hacks slowly, while missions often have drones and spiderbots on site in case you didn’t bring your own. And while the game simulates what your operatives are doing when you’re not playing them, the fast-travel system and ability to swap out characters with no consequence mean there’s no incentive to just use who you have; even if you want to try and exclusively hop between nearby characters, the cumbersome process to display individual operatives on the map seems to discourage it.

Perhaps there’s some other take on Legion that lives up to its potential, if not for salient commentary then for player-authored mayhem as you juggle random variables. But as is, the game takes care to sand down its roughest edges, ensuring that no future police state can truly hinder the progress of a growing #rebellion. To turn London boroughs defiant against Albion, one of the tasks you must complete is to find a particularly prominent piece of their holographic propaganda and switch it to instead display the ever-marketable DedSec iconograph, firing up onlookers with that most powerful tool of all: a good brand.

The game was reviewed using a review code provided by Ubisoft.