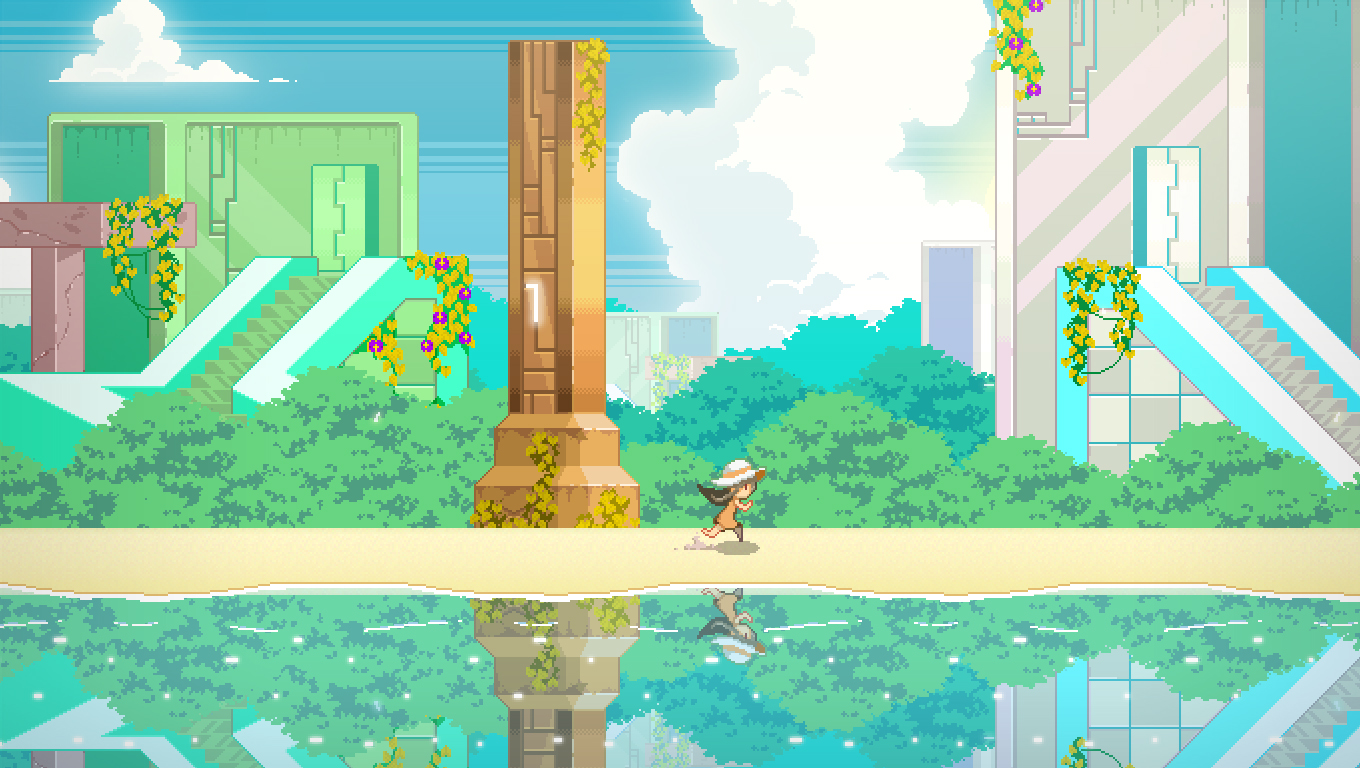 Decked out in a cute orange sundress and a floppy, wide-brimmed hat, Dysis, the protagonist of Matías Schmied’s Evan’s Remains, looks more prepared for a tropical vacation than she does for an adventure. That, though, is somewhat fitting in the case of this enemy-free, logic-based platformer that strives to be something more than your typical adventure. And yet, the game too often comes across as an overly laidback vacation, with too much time spent passively looking at things as opposed to actually interacting with them. The game’s just over two hours long, the majority of which you’ll spend reading dialogue bubbles as opposed to actively solving the game’s puzzles. Moreover, its casual visuals—lush, pixelated fields of red flowers and moonlit beaches—undercut any sense of danger, even once Dysis starts running into strangers on her supposedly deserted island.

Dysis’s progression along the island’s beach is pretty linear, as you’ll read some text, move to the next section, then read more text. Occasionally, one-screen logic puzzles appear, breaking up the text much like illustrations scattered throughout a novel’s pages. And like such illustrations, these puzzles, which take the form of giant monoliths left behind by an ancient civilization, visually describe what you’ve been reading about. According to Clover, a fellow explorer who Dysis runs into, the stone platforms jutting out of these pillar-like structures function collectively as a giant hieroglyph that spells a message that’s rumored to lead to a hidden treasure. And plot-wise, flashbacks sprinkled throughout the game operate a bit like the monoliths, as each new interaction shown between Clover and a self-obsessed vagrant named Vincent peels back a bit more of the twisty plot, particularly with regard to the island’s true purpose and why Dysis, of all people, was specifically asked to travel there.

The story of Evan’s Remains benefits from the puzzles, since the titular man, whom Dysis has been sent to find, is exactly the sort of reclusive, eccentric genius who would probably get a kick out of them. But those puzzles don’t always benefit from the narrative. The message that Clover is seeking to reconstruct is only 28 words long, with each monolith representing one of those words. That’s a far cry from the hundreds of puzzles found in games like The Witness, where the various symbols you pick up in various places eventually all start getting used in unison to modify one another and make for increasingly complex puzzles. It doesn’t help that one puzzle in Evan’s Remains representing the word “the” is repeated several times. This is narratively understandable, given that each puzzle represents a word and that some occur more than once in the message. But this limited vocabulary comes at the cost of showcasing a wider variety of puzzles. It also means that the revelations that occur after Dysis and Clover decode the final puzzle have to be presented in an entirely non-interactive way. By design, there aren’t any puzzles left to support the remaining plot twists.

The scarcity of the game’s puzzles is frustrating, because, slight repetition aside, every one of those puzzles is cleverly designed. It’s fun to try and decipher the color-coding and etched symbols for each type of platform, so that you can then plan a proper route to the top. For instance, as Dysis leaps off a standard platform, it recesses into the wall, and when she lands on a step marked with a bowtie-like infinity symbol, all of the plain platforms reverse their current state, either springing back out again or vanishing from sight. To scale one level, she’ll first have to make every platform recede so that, once she hits a certain platform, they all pop back out to make a clear pathway to the top. As the plot gets twistier, introducing a warp-gate technology and some hidden identities, so, too, do the puzzles grow more complex, with symbols appearing that allow you (or platforms) to travel between points or which can alter other symbols. Working out the tricks for each new sequence of platforms mirrors the way in which Dysis, and by extension the player, is deciphering the island’s own properties.

It’s admirable that Evan’s Remains resists the urge to pad out its plot with superfluous puzzles. But it goes too far in doing so, given the long stretches of exposition between each monolith. This serves neither the puzzles, which are too rare, nor the characters, who, apart from Clover, end up severely underdeveloped, the result of having only a few between-monument scenes in which to appear. Given that there are already two plot-removed bonus puzzles in a post-credit ode to Kickstarter backers, the addition of a New Game+ mode could have gone a long way here. Not only could it have given players an excuse to revisit earlier plot points, but a series of remixed, harder levels could have better satisfied rabid puzzle-solvers, all while still remaining true to the essence of the 28-word message you’re trying to reveal.

Review: Resist the Call of the Pretty but Empty Shantae and the Seven Sirens