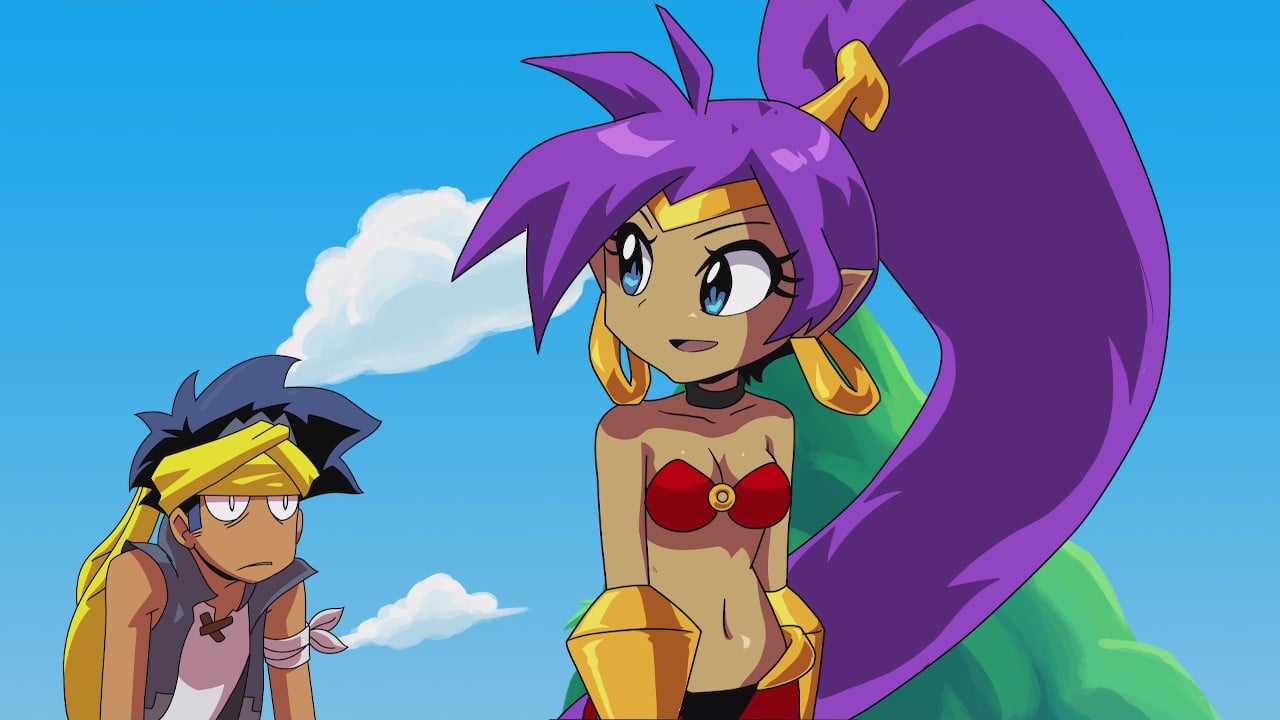 With each new entry in WayForward’s Shantae series comes the hope that new light will be shed on its adorable half-genie hero’s mysterious heritage. And the opening of Shantae and the Seven Sirens suggests that the series is going to at last fill in some of those blanks, as Shantae is for the first time meeting her brethren at Paradise Island’s Half-Genie Festival. But before Harmony, the eldest and wisest half-genie, can reveal her newfound friend’s history, she and the other half-genies are mysteriously abducted by Shantae’s old rival, the pirate Risky Boots, forcing Shantae to retread the same ground of the prior games’ fetch-quest-driven, backtracking-filled action-adventuring.

This familiarity is frustrating because the Shantae series has never been better animated. Shantae’s various animal transformations are adorable and seamless, particularly in the way her stone-breaking Bonker Tortoise retains those elegant eyelashes and how her ponytail becomes a tentacle when she shifts into her pink Octo Jet form. The other half-genies are also well-defined, with Zapple’s electrical powers self-evident in her spiky hair and Vera’s nature-tuned healing magic reflected by all the leaves woven into her mane. No doubt, Shantae and her fellow half-genies have never brimmed with as much life as they do here, but after a while the animation starts to feel like wallpapering over the game’s fundamental emptiness.

Maybe this purposeless feeling comes from the fact that Shantae and the Seven Sirens is a clone of a clone. The prior games in the series were already sexy reskins of the Wonder Boy games, right down to the animal transformations, but without the complexity. Shantae and the Seven Sirens offers an even more sultry update of what its predecessors have done. Sure, Shantae now turns into a Dash Newt instead of monkey, or a Sea Frog instead of a mermaid, but she still more or less puts into action the same wall-hugging and water-swimming abilities that she did in earlier games in the series. Though the well-written, if glib, fourth-wall-breaking narrative may lampshade the repetitious antics of returning characters like Squid Baron, it does nothing to alleviate the player’s déjà vu.

Complacency is the name of the game here: Each dungeon does just enough to differentiate itself from the previous one—look at the sliding-block puzzles of the Coral Mine or the cannon-mazes of the Sea Vent Lab—but they’re otherwise completely forgettable. The chip-tune beats are fine when matched to the waves of enemies or perilous spike-filled corridors, but if you listened to them outside of the game, they’d be a fate worse than elevator music.

The game’s backgrounds adequately convey the theme of each location, whether it’s a mossy tunnel or a spooky ghost ship, but only in the most basic sense, as there’s no real depth to these flat 2D renderings. There’s even an entirely superfluous “Monster Cards” gimmick that tries to make you feel better about all the repetitive hair-whipping attacks you have to perform against largely unthreatening enemies and bosses, in that occasionally your foes will drop cards that you can then equip to get slight ability boosts.

All of these flaws are much more noticeable in the rushed second half of the game, once the novelty of Shantae’s cute dance moves have given way to the realization that, no, you’re not doing anything interesting with that Quake Dance ability—just casting it on every screen, hoping that it causes some new treasure or path to reveal itself. This makes the constant backtracking even more irksome, since picking up those extra collectibles simply requires the push of a single button, as opposed to some creative combination of Shantae’s abilities. Worse, the final two dungeons in Shantae and the Seven Sirens do away with any pretense of exploration: The first, the so-called Squid Pit, is nothing more than a timed series of battles, and the second, the Flying Fortress, is just a long gauntlet of trite platforming challenges.

Shantae and the Seven Sirens is likely to work its magic on younger players who are new to video games, who will ooh and aww at all of its cute bats, crabs, spiders, and skeletons, unable to recognize just how contrived so much of game’s elements really are. They won’t be bothered by how easily the bosses can be defeated, almost always by mashing the one attack button. Which is to say, if you haven’t seen this sort of thing before and don’t know what you’re missing, it’s a competently built distraction. But for everyone else, it’s hard not to be disappointed by the unfulfilled promise of Shantae and the Seven Sirens. For a game that’s centered around taking a vacation, it’s really just too much work.

This game was reviewed using a press key provided by WayForward

Review: Evan’s Remains Is a Unique, If Much Too Brief, Puzzle Platformer