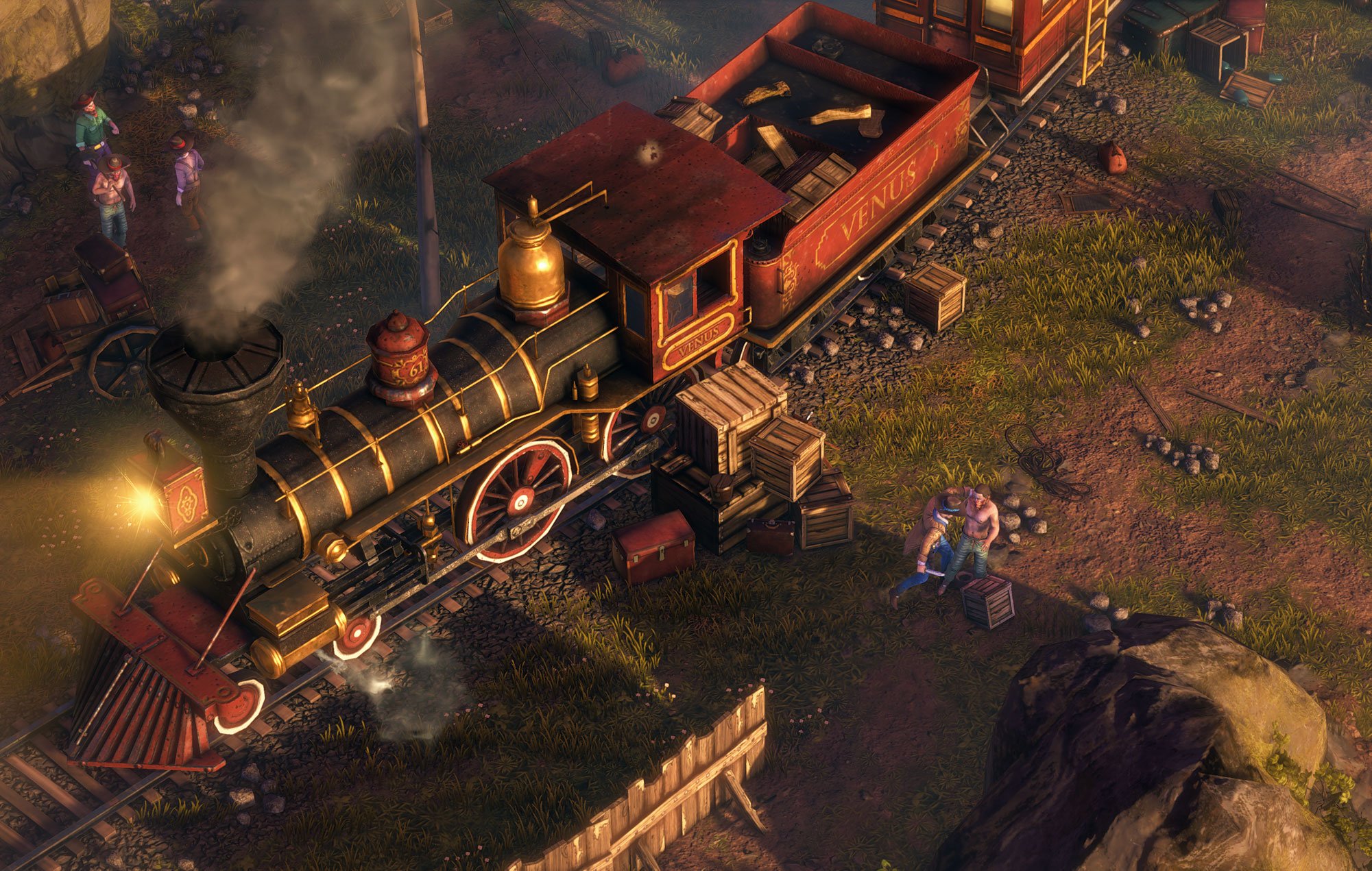 Because the average western so often revolves around big, tense standoffs between cowboys with itchy trigger fingers, it’s almost a relief that Desperados III eschews all that rootin’ tootin’ machismo. Given the prominence it gives to real-time tactics, consider the game a thinking person’s western, more puzzler than action extravaganza.

This first installment in the Desperados series since the 2007 spinoff Helldorado is a prequel, and it opens with a flashback to protagonist John Cooper’s last adventure with his bounty hunter father, during which he learns to “think slow, act fast.” That’s basically the modus operandi of German-based Mimimi Games’s latest, because deliberate, stealthy gameplay is the player’s key to victory. For one, it’s more than satisfying to watch your minutes-long action planning, of furtive repositioning and queuing of unique skills, result in the swift and simultaneous sacking of guards at the hands of your five colorful posse members.

That’s not to say that Desperados III lacks the tropes of your traditional western; short of a poker game, it has those in spades. Over the course of the 16-mission campaign, players will find themselves using dynamite to thwart a train robbery, breaking up a wedding with a gatling gun, escaping a mining prison camp with a minecart full of gunpowder, and kidnapping a rich tycoon. It’s a bit like playing through a collection of the genre’s greatest hits, but thanks to the novelty of the tactical framework and the wide range of characters, it never plays out in a derivative fashion. There may not be anything new or particularly deep about the way in which roguish Cooper and wily Kate slowly fall for each other as he attempts to save her ranch, or the way she aids him in his quest for revenge, but their interactions are well-voiced and neatly developed with organic mid-mission observations. It especially helps that Kate is no damsel in distress, even though her main function—as a sexy distraction—is a bit retrograde.

The game’s writing is so sharply detailed that characters come to be defined by more than just their unique skills and abilities, and you come to know them more as they open up about themselves depending on the mission. It’s particularly hard not to fall for the burly trapper Hector Mendoza, given the way he so lovingly speaks about his precious bear trap, which he calls Bianca, and curmudgeonly explains his rationale for being unable to swim. And when Cooper alone first interacts with Doc McCoy, the latter comes across as a mere archetype, tersely refusing to get involved in anything he’s not being paid for. But in later missions, when he’s paired up with spirited voodoo practitioner Isabelle Moreau, who endearingly dubs him “Sunshine,” you’ll come to see his steely front for the fear of intimacy that it is.

While the plot and characters in Desperados III may be familiar, and the gameplay recalls that of other modern real-time tactics titles like Mimimi Games’s previous Shadow Tactics: Blade of the Shogun, each scenario feels distinct. You’ll need different skills to burn down a riverboat than you do to blow up a bridge or defend a ranch. Even slight shifts in terrain and available party members (or their inventories) serve to shake up your tactics. No sooner have you mastered using Kate’s flirtatious disguises to lure guards out of position than you’ll find yourself in a situation where she doesn’t have a costume, or isn’t with your gang, and you’ll suddenly have to come up with other ways to advance, such as using McCoy’s long-range (and silent) sniper rifle or Isabelle’s poison darts, which let her temporarily possess a target.

Many missions require players to further adapt to using non-lethal or indirect actions, particularly those set in civil zones like the small town of Flagstone, Colorado; the bustling streets, brothels, and docks of New Orleans; and a gala in a massive, cliffside New Mexican estate. In some cases, players may even need to sneak around eavesdropping in order to figure out how to proceed. Environments, too, often force a change in tactics. Muddy swamps and sandy mines are especially dangerous, as you’ll leave footprints behind, and nighttime encounters require players to find ways to disable light sources.

If there’s any fault to be found here, it’s a certain rigidity. Compared to Hitman 2, which allows you to find numerous paths to perform an assassination, Desperados III begins each mission by walking your team through a pre-established plan. And enemies are as much a slave to this as players, as they have no real AI, and move in completely predictable patrols. They work on automated loops, so your window of opportunity never closes; a guard who wanders off to take a piss will comically continue to do so, over and over again, until you make your move.

At times, Desperados III gives you the illusion of choice, such as your being able to reach a building through one of two streets, or to take one of two paths through a canyon to a goal. Which is to say, when it comes to completing certain objectives, there’s little room for your creativity to be stirred. For instance, you can’t use a torch to set a guard ablaze, nor can you burn a barrel or a haystack hiding spot—unless the game specifically states otherwise. In the game’s restrictive language, a torch exists only to burn an existing pool of oil, and no other use will do. It’s still fun to figure out how to get past each new configuration of enemies, but the game’s coolest feature, a 64x-speed end-of-mission replay that iconographically shows how you navigated the map, ends up a bittersweet reminder of your own constraints.

While there may be a missed opportunity here for some big-picture tactics, the individual, self-contained puzzle-box encounters are each discretely entertaining. As a puzzler, then, Desperados III thrives on its rigidity, particularly in a series of optional missions, the Baron’s Challenges, that serve to break up some of the more complicated stages with some short-and-sweet tests of your mastery of specific skills. These levels demonstrate that not all restrictions are bad. In fact, one particular challenge in which players can only use environmental effects to kill their targets is a highlight, with chains of distractions akin to a Rube Goldberg machine required in order to set the stage for some very happy “accidents.”

This game was reviewed using a press key provided by Evolve PR.

Review: Persona 4 Golden Is Better Served As a Cherished Memory