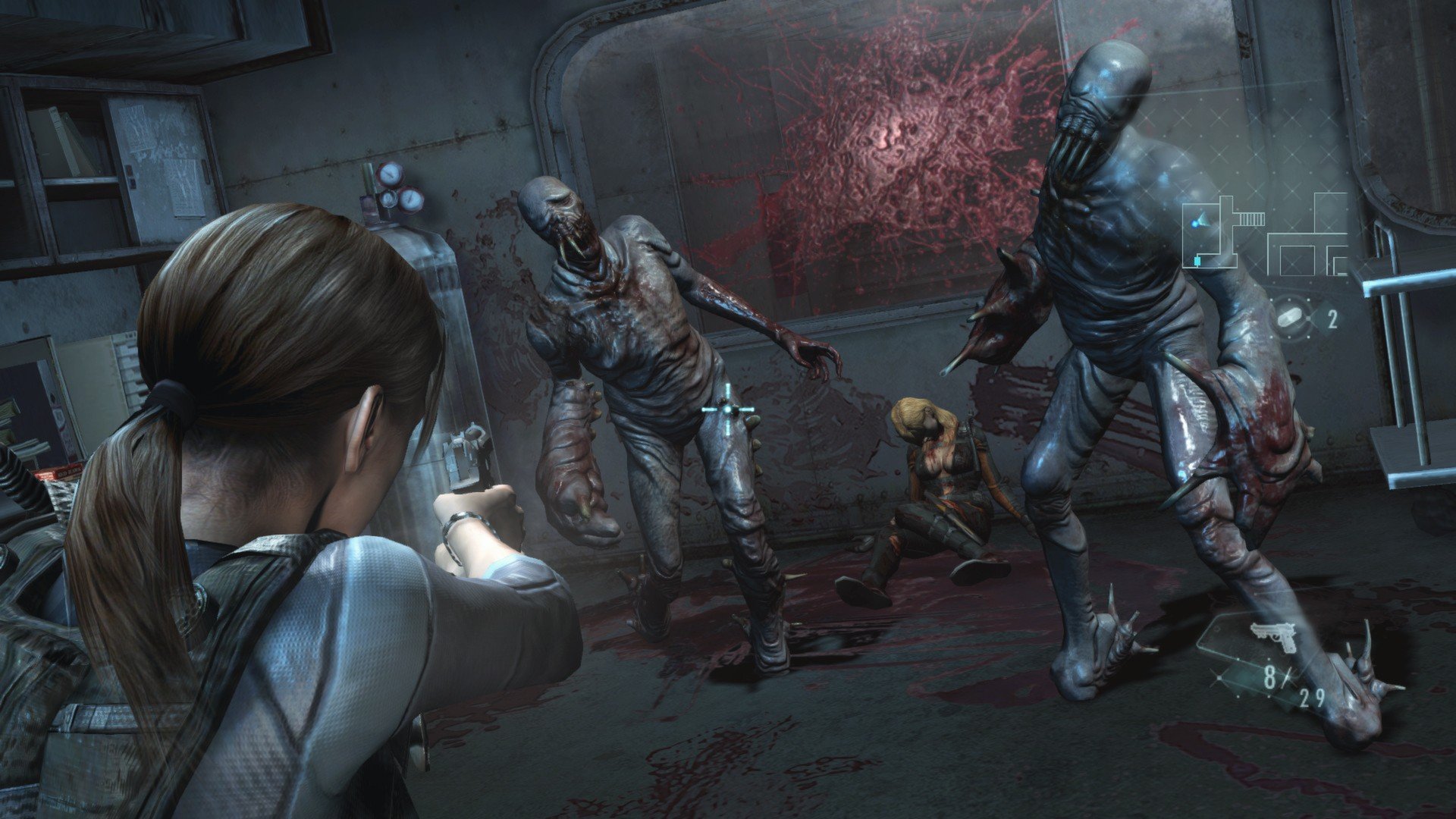 With an overall aesthetic that favored a sustained mood over flashy action set pieces, the triumph of the first four Resident Evil games was how they sent shivers down our spines and snatched our breath away at unforeseen intervals. Resident Evil: Revelations gifted Nintendo 3DS owners with that sort of moody, nerve-jangling experience, but despite the game’s success, the handheld system’s single analog stick was an awkward control setup. Purchasing the 3DS add-on peripheral Circle Pad Pro was a half-measure for survival-horror fans desiring the kind of responsive control schemes associated with spooky franchises like Alan Wake and Dead Space. Fortunately, this new HD port of the game utilizes twin-stick controls well and looks and plays even better.

Set between the fourth and fifth entries in the long-running series, Revelations sees counter-terrorism agents Jill Valentine and Parker Luciani being sent to an abandoned transport vessel, the SS Queen Zenobia, in order recover Chris Redfield and Jessica Sherawat. The Bioterrorism Security Assessment Alliance (B.S.A.A.) lost contact with Chris and Jessica after they left to investigate II Veltro and their clandestine naval base. Plenty of twists and double-crosses propel these four characters through the game’s episodic plot, the mysterious island Terragrigia always looming large in the distance. But as far as Resident Evil narratives go, this one is boilerplate.

Still, the graphics dazzle where the conventional plot does not. The game’s jump to HD consoles lends the monstrosities you encounter a more palpable aura of dread. All the glistening carapaces bring to mind a serial killer’s waterlogged victims dredged from the ocean floor, and the incredible lightning schemes cast elongated and dynamic shadows across the SS Queen Zenobia’s extravagant surface. Fuzzy and compressed environmental textures remind you that this title has portable origins, but the cruise-ship setting still stands strong alongside such classic milieus in the franchise’s universe as the Spencer Estate and Salazar Castle.

Moving while shooting is still a godsend, since the first five installments in the Resident Evil franchise kept the player planted to the ground while unleashing gunfire. Strafing around lumbering zombies and other marine-based mutants is responsive, and the addition of a timed dodge move is helpful in the suffocating hallways you often find yourself navigating through. The one new addition to this HD version of the game is a merciless Infernal difficulty mode that lobs ridiculous amounts of enemies at you, makes ammo even more scarce, and rearranges item locations. Triumphing over the already pretty difficult Normal mode allows you to roll your upgraded weaponry to Infernal mode, a typically routine bonus for a port.

The game’s abiding draw, as in any Resident Evil entry, remains getting lost in environ filled with virus-afflicted ghoulies. The most common nemeses you encounter on the high seas are outlandish, greasy corpses that liquefy into a murky oil slick when dispatched. Also, bothersome creatures show up that resemble mutated sharks that attack in herds. Each encounter is just different enough to keep you reeling, and the delight that stems from haphazard encounters dovetails into the addictive, Resident Evil: Mercenaries-style Raid mode. Randomness plays an even deeper role in this two-player co-op alternative, which recycles levels from the main campaign. It also introduces plenty of chaos by shuffling up enemy placement. This bottomless experience is hard to master, but easy to pick up for a night of larks.

Revelations holds a unique place in the Resident Evil canon for its impeccably moody sense of ambiance. Whereas most modern survival-horror titles try to twitchily appeal to shooter fans looking for a fast-paced roller-coaster ride, Capcom delivers a more leisurely and suspenseful prowl through the shadows. Portions of Revelations may deliver high-octane thrills, but its paramount moments are frightening because they’re understated.

Review: On the Rain-Slick Precipice of Darkness 4