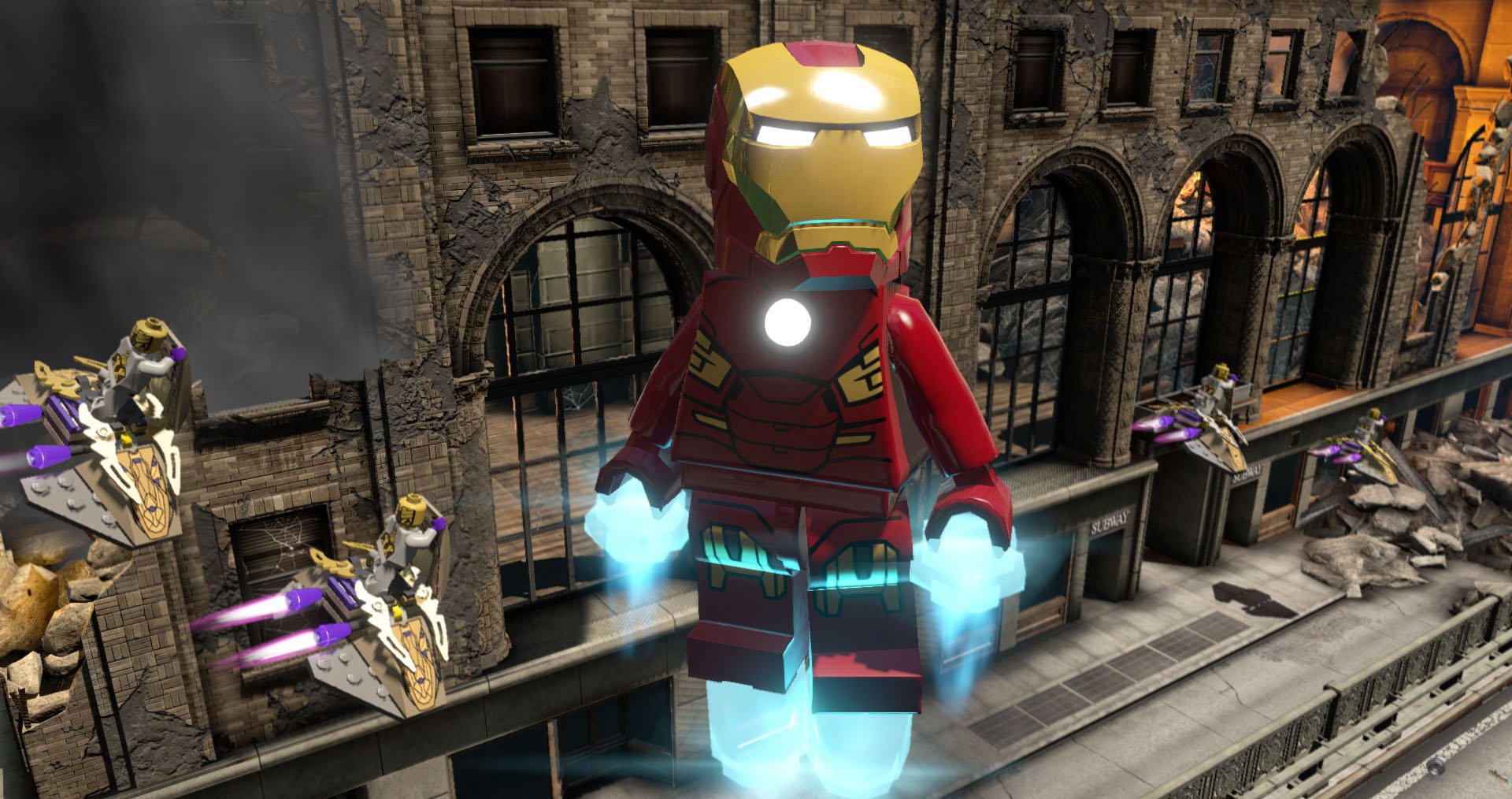 The sensation of watching Joss Whedon’s Avengers films, blood-pressure-raising cinematic carnival acts that the filmmaker just barely kept from falling apart at the seams, is perfectly captured by Lego Marvel Avengers, though perhaps not in the way Traveller’s Tales intended. Just like Age of Ultron in particular felt like a film that stretched Whedon’s capabilities as a director to their limits, so does Lego Marvel Avengers feel like a Traveller’s Tales Lego video game showcasing the outer limits of what these titles are capable of.

You can feel the game push up against limitation and expectation right from the first stage, which recreates the assault on Strucker’s fortress from Age of Ultron. It’s a jumble of a level that logic dictates should be spent meticulously teaching the player about the new team-up attacks and what each of the Avengers can do, all while holding one’s hand through some tricky early puzzles. Instead, it’s a trial by fire, as the screen flooded with constantly spawning enemies and environmental puzzles that require a certain character’s specific skills to conquer, but with the player never told exactly which character or which ability that is.

Eventually, and with a lot of trial and error, it’s possible to figure out for oneself what buttons do what, and almost each and every time comfort starts to set in, the game will strip it away to introduce a new mechanic out of nowhere. A straight-up side-scrolling fight will switch at random to space-shooter segments a la Resogun, where Iron Man flies in a cylindrical pattern around an area, shooting down drones and rescuing hostages. A rendition of the scene from The Avengers where Nick Fury finds Steve Rogers taking his man-out-of-time frustrations out on a helpless punching bag will turn into a full-fledged playable and tough retelling of Captain America: The First Avenger. Anyone who’s played a Lego video game in the past will find this one tougher than usual, and anyone who hasn’t will have better luck solving the its puzzles by flinging a turkey sandwich at the screen.

And many times that difficulty will be for unfair reasons. The game completely forgets to tell you explicitly that holding a button will cause Tony Stark to jump in and out of his Iron Man suit at any time. A specific recurring puzzle where Thor charges up his hammer and uses it to juice up a power station will undoubtedly have players failing the first time around, because the station displays the wrong button entirely to activate it using said hammer.

More often than not, however, the difficulty will stem from the game’s innate, surprising complexity. Prior to Lego Marvel Avengers, the puzzles in a Lego video game were typically a matter of destroying everything until you could build something new with the debris, with any character’s secondary abilities—Yoda traveling around in a floating capsule, Indiana Jones using a whip in combat instead of a gun, Spider-Man shooting webs instead of just fighting hand to hand—coming into play at very specific, highlighted junctures. Lego Marvel Avengers requires a hard-won competency with every aspect of each character you control during the course of the game.

Whedon’s films had the hard job of juggling city-wide mayhem across the perspectives of around half a dozen characters at any given moment, and the fact that the game is able to keep pace in that regard is impressive. Not only does Lego Marvel Avengers have to figure out how to play fun havoc with the plots of the tehse films, with a couple of stages even devoted to CliffsNotes versions of Captain America: Winter Soldier and Iron Man 3, it somehow has to inject new, sillier humor into the mix and in a way that doesn’t clash with the sardonic streak already inherent in Whedon’s writing.

The Lego video games’ penchant for slapstick comedy is still in full effect here, with plenty of visual jokes and bizarre running gags throughout, but Lego Marvel Avengers is prone to neutralizing punchlines that worked perfectly fine on their own merits, none more egregious than turning The Avengers’s infamous Hulk/Loki “Puny god” moment in Stark’s Tower into a co-op stage, where the slamming is just something for the Hulk to do while Black Widow solves a puzzle one floor above. On the flipside, the Tony Stark/Steve Rogers conversation at Clint Barton’s farm in Age of Ultron that plants the dramatic seeds for the upcoming Captain America: Civil War is, bafflingly, playable as a wood-chopping mini-game, one that does nothing to accentuate the conflict in the dialogue. Add in some amateurishly implemented dialogue from the films—with volume dips and unrelated/unwarranted dialogue drops playing during special attacks—and you have quite a collection of spectacular failures here in cohesively telling the story of these two films.

Despite all this, Lego Marvel Avengers has some of the best orchestrated action and the most deviously satisfying puzzles of any of the Lego video games, and no small share of laugh-out-loud jokes, the best of which come from Stan Lee’s scattered cameos throughout as a constantly exasperated NYC cab driver who eventually gets moved to Korea to escape the chaos, and ends up driving a commuter train that gets derailed by Ultron.

With this game, however, we see a developer biting off slightly more than it can chew, which isn’t a signal to stop making these games so much as it is a prompt to question who it’s making these games to please, if the answer is no longer “everybody.” The game resides in a weird limbo where it may be too unwieldy for younger players to handle, and too rudimentary to act as the ambitious Marvel beat-’em-up/puzzler it could be with a bit more polish.

Review: This War of Mine: The Little Ones