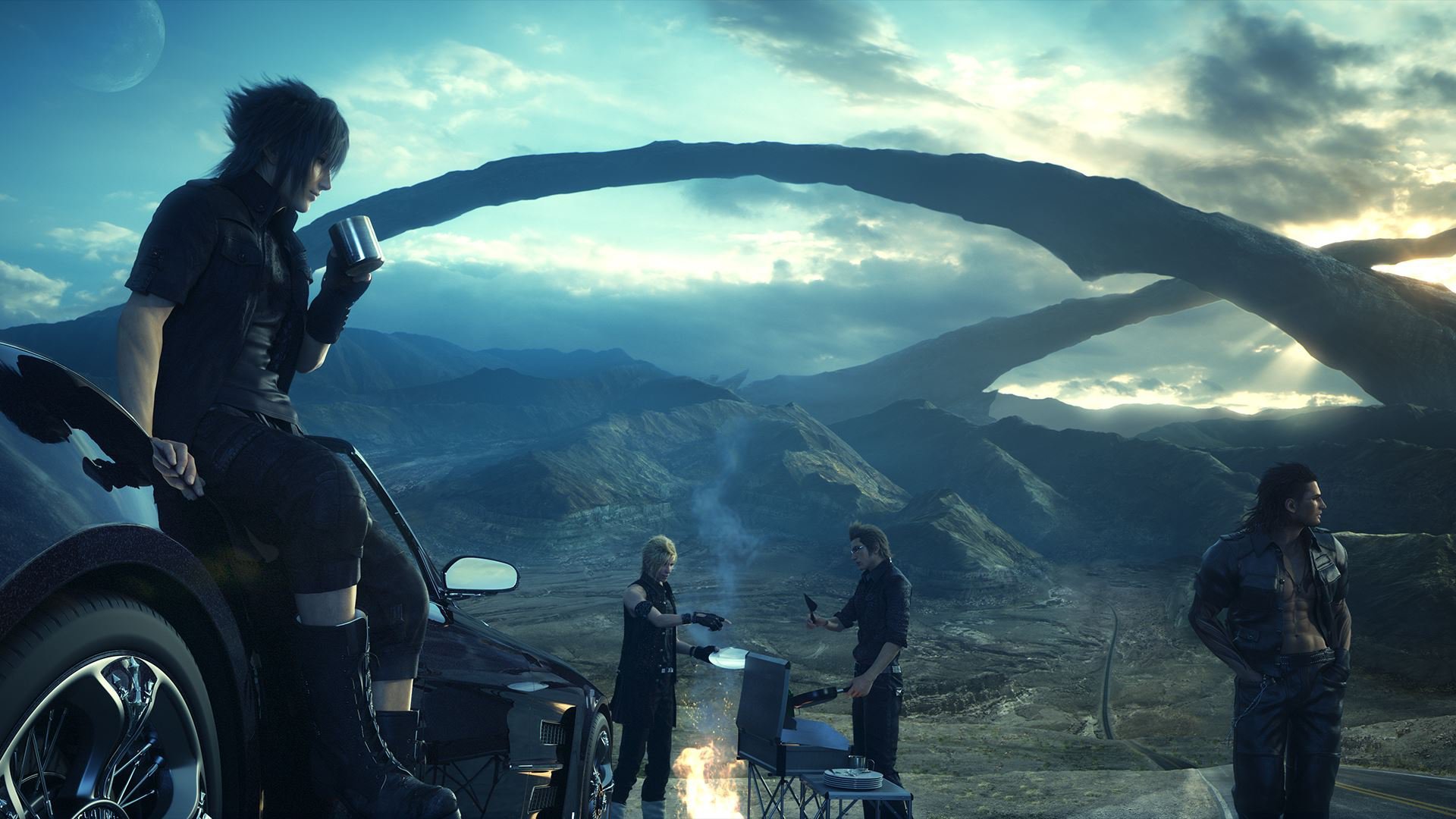 Throughout Final Fantasy XV, seams are sometimes exposed that reveal the game that was promised to us by Square Enix in seven years’ worth of trailers: a chaotic, overambitious mess of fantasy tropes, draped in modern fashion sensibilities, closer in form and function to its non-MMO predecessors in the Final Fantasy XIII trilogy—a low-res texture here and a PlayStation 3 asset there. Overall, though, the finished game is utterly remarkable and admirable for largely ignoring virtually every instinct that’s guided the creation of every Final Fantasy before it, including whatever vision guided it when it was called Versus XIII. Even in its follies, Square Enix has crafted something so much smaller, intimate, and mature than anything the game Versus XIII could have become. It took 10 years, a complete overhaul, and millions of dollars for the developer to craft the most decadent and elaborate indie game ever made.

There’s a traditional Final Fantasy story happening on the literal periphery of the events depicted in Final Fantasy XV, covered for the most part by the Takeshi Nozue film Kingsglaive: Final Fantasy XV. It’s about the kingdom of Insomnia, ruled by an ever-weakening monarch doomed by his bloodline to live a half-life keeping his people shielded from an invading empire. However, even while the inevitable ruination of Insomnia comprises most of the stakes of the story, the actual game is only tangentially concerned with it.

Instead, the game focuses primarily on the king’s son, Noctis, who’s arranged to be married to Lunafreya, a childhood friend and the princess of a rival kingdom. It’s a mostly amicable arrangement, though still unexpected, and more responsibility than the prince particularly wants. As such, as a final act of freedom, he decides to take the scenic route to the city where he’s meant to be married, bringing his three closest friends from the Kingsguard—Prompto, Ignis, and Gladiolus—on a cross-country road trip toward the altar.

The game’s restraint is utterly remarkable. We don’t get the full breadth of the world of Eos where Noctis and his company reside, no million-dollar CG flyover or magical, crystalline gods to meet, at least this early on. The game starts its journey with four young men pushing their snazzy but broken-down car down a backroad to the nearest gas station, ribbing each other all the way, framed by Florence + the Machine’s tender cover of “Stand By Me.” In the space of two minutes, we get a full picture of who these young men are, and the innate goodness that carries them through the trials to come. It took Final Fantasy XV to truly highlight how pathetically few games on this scale forget to take the path of least resistance when it comes to building empathy toward a cast of characters, but it’s almost a sheer act of creative heroism that the game manages to maintain that over the course of several hours.

Much of the first third of the game suggests less your average JRPG hero’s journey than it does a bizarre reworking of Y Tu Mamá También, swapping Mexico’s political reality for a fantastical city-destroying coup that leaves our main characters without a home to return to. Most of Final Fantasy XV is spent building relationships, seeing how people live outside the massive city where Noctis and his crew come from. Gameplay-wise, this translates to hours upon hours of the tiny, menial quests that utterly drag in a typical RPG, but sing due to the character centrism that bolsters virtually everything else in the game. Here, if not a moment to converse with someone new, each quest is time spent letting Prompto take pictures of the world, time spent letting Ignis see and sample local cuisine, time spent camping with best friends. The four friends talk to each other constantly throughout the journey, keeping each other in check, keeping each other sane, and keeping each other company. The people who send the crew out all have stories of their own, all coloring in a little part of the world that players eventually need to save.

Final Fantasy XV, though, is still indisputably a Final Fantasy game, filled with magic and dungeons and dependent on yet another attempt to reinvent the real-time RPG combat system. There’s unfathomable depth to every combat encounter, but the game’s overarching tendency to avoid spoon-feeding the player sometimes works against it, leaving many vital concepts frustratingly obtuse. Around the campaign’s halfway mark, the previously wide-open world gets very linear, breathlessly moving Noctis and his crew from one major plot point to the next, only barely stopping to explain the mystical particulars of why Noctis must do what he does throughout. That said, while we’ve seen what happens when a Final Fantasy game mires itself in details and mythology, choosing to let the emotions of its characters do much of the heavy lifting is a storytelling risk that ultimately benefits Final Fantasy XV, forcefully and necessarily divorcing the game from its overwrought past.

Final Fantasy XV is a game that chooses to leave its mythology disjointed and its emotions real, and as it turns out, the kind of story being told here is better for the new balance. The game keeps Noctis’s burgeoning maturity front and center to the bitter end. It surrounds him with characters who are given ample time throughout to reinforce their love and concern for him and the man he has to grow up to be, not throw the names of forgotten gods in his face. This is a sea change for Final Fantasy, a moment where Square Enix, long the bellwethers of unfettered and unwieldy fantasy storytelling, finally managed to hit on something real. And it’s a beautiful thing.