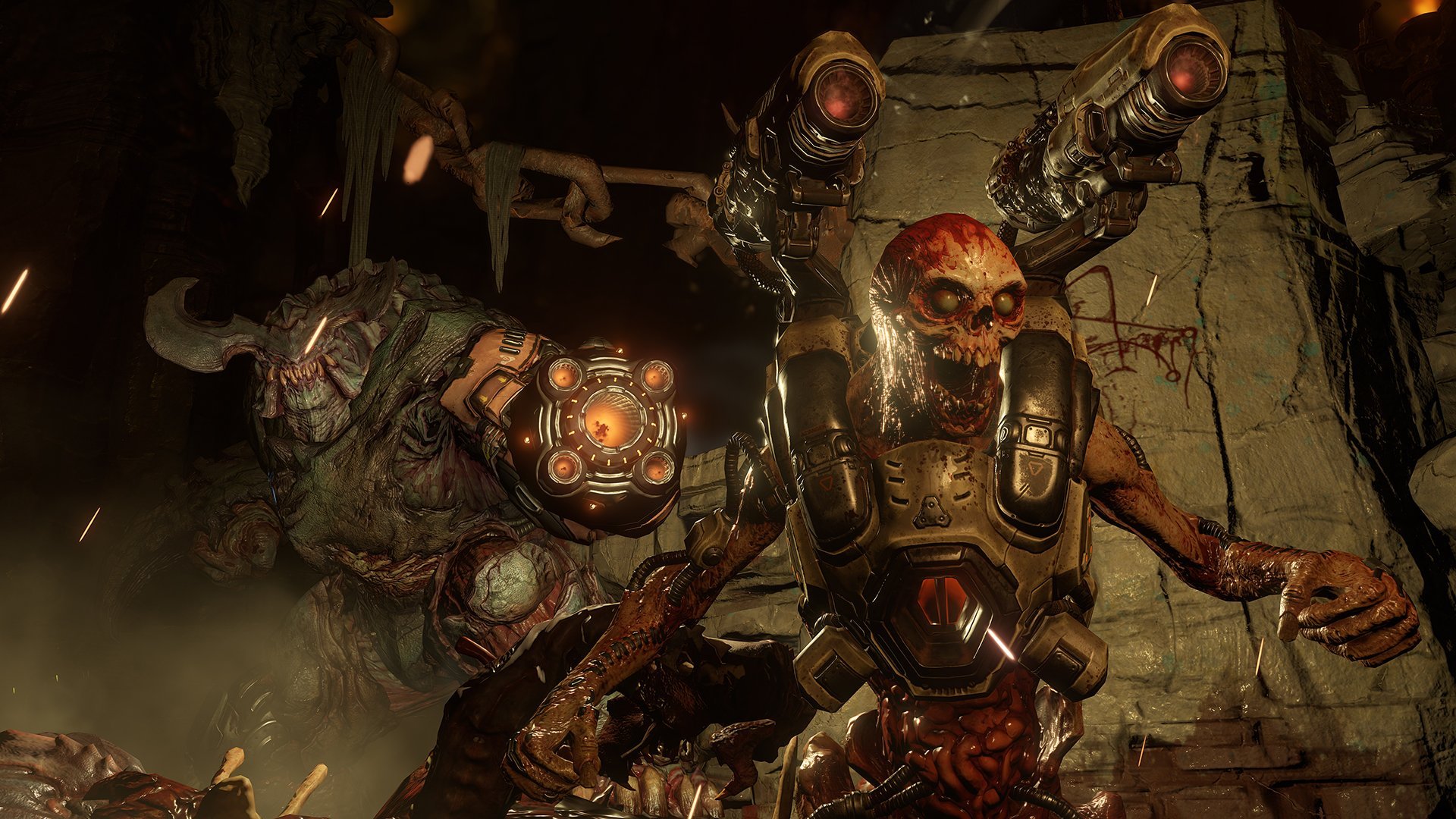 It’s prophetic now that the first and most iconic music anyone hears when they start up the original Doom is a blatant chiptune riff on Metallica’s Master of Puppets-era sound. If old-school Doom equals Metallica at their hardest and thrashiest, and the slower and refined Doom 3 is akin to the band’s misaligned Load/Reload era, Doom’s current revival is its Death Magnetic: an attempt to reclaim the throne by playing harder and faster than it has in decades, and at the expense of substance or growth.

There’s immense, bloody joys to be had throughout nü-Doom, and the technical proficiency on display is undeniable, but very little about this reboot sticks to the ribs when you’re not in the moment. The game is there to let the player do one thing: kill with extreme, unrelenting prejudice. But by and large, it has little use for anything that doesn’t help the player do that one thing.

The game, to some extent, exudes a small measure of meta-awareness of this. The main story is predicated on one of the most ill-conceived mad-scientist plots in some time: Scientists accidentally open a portal to hell, and instead of instantly realizing they’ve made a terrible mistake, they decide to use the pure concentrated dark energy flowing out of the place as an alternative fuel source. Naturally this goes as well as one might expect.

To combat the never-ending horde now streaming out of hell’s gates, Samuel Hayden, the cyborg now running the whole operation, turns to a man known throughout this dominion as the Doom Slayer—the official and infinitely more metal name for Doomguy, the series’s unnamed, non-descript marine. We learn through glyphs scattered throughout hell that he’s known for his unthinking, merciless slaughter of any demon who stands in his way. He is, in demon circles, the apex predator, death on two legs, and if he’s ever resurrected, it means only one thing: a whole lot of demons are gonna die.

It’s a devious setup. The Doom Slayer inherently needs no motivation, plot, or characterization, though all of those things are there for the reading in the game’s extensive mission dossiers. But the simple fact is that if Doom’s protagonist is awake, killing is in order. And so it goes: Beginning with the game’s first smirking, industrial guitar riffs, which chug in rhythm to the cocking of a shotgun, the player’s job is to kill their way to hell and back.

The game’s introductory hours are plodding, interminable tutorials attempting to ease the player into comfort with the controls and the upgrade system for weapons and the Doom Slayer’s suit. The only enemies are smatterings of demon-possessed scientists, and spry, fireball-throwing Imps. It’s here that Glory Kills are introduced: quick and messy finishing moves that, when the demon enemies are staggered, net the player some additional health with every kill. It’s also at this point that you get the chainsaw, which serves much the same purpose for earning additional ammo by means of some truly gnarly dismemberment animations, but with far more limited uses.

It’s when the Doom Slayer finally finds himself in hell that business finally picks up to the pace that the game strives to maintain for the remainder its campaign. Here, Doom becomes a never-ending string of contained killzones, requiring the death of everything moving that isn’t you. The game is at its best here. Demons can do serious damage in the early going (and what they lose in damage as you advance, they make up for in sheer numbers), ammo is scarce, and the environments take on a verticality and trickiness that’s rare in FPSs, so the only way to truly stay alive is to constantly move, keep switching weapons, and get an expert handle on when Glory Kills/Chainsaw Kills need to come into play in order to gain the much needed life or ammo you need to keep moving. There’s no such thing as cover fire or sniper points throughout the game’s battles. You’re either in the gory, terrifying thick of it, half insane and twitchy on the trigger at all times, or you’re dead.

But it’s a maniacal high that isn’t sustained. A few hours in, and with the exception of a few fun but predictable boss fights, you’ve essentially seen every enemy Doom has to offer, every trick up its sleeve, and besides the late-game appearance of the series’s famous BFG 9000, all the weapons are at the Doom Slayer’s disposal by the halfway mark. The game is also hamstrung by some poor level-design decisions; the end of a firefight often means shambling around in circles in the dark, looking for an exit that the convoluted map function almost makes harder to locate. The story also offers very little worthwhile reason to stop the game dead so Samuel Hayden can deliver more “What have we done?”-like platitudes. Doom’s multiplayer feels like the warmed-over ghost of shooters past, though give credit where credit’s due: Snapmap, the game’s custom map-making mode, is well executed.

Doom feels stuck out of time, a gorgeous, gruesome beauty, but only inches removed from shooter conventions 15 years past their prime. There’s something satisfying about it in the moment, when all the elements work in harmony, but it feels obsolete the second you put the controller down.

Review: Shadow of the Beast