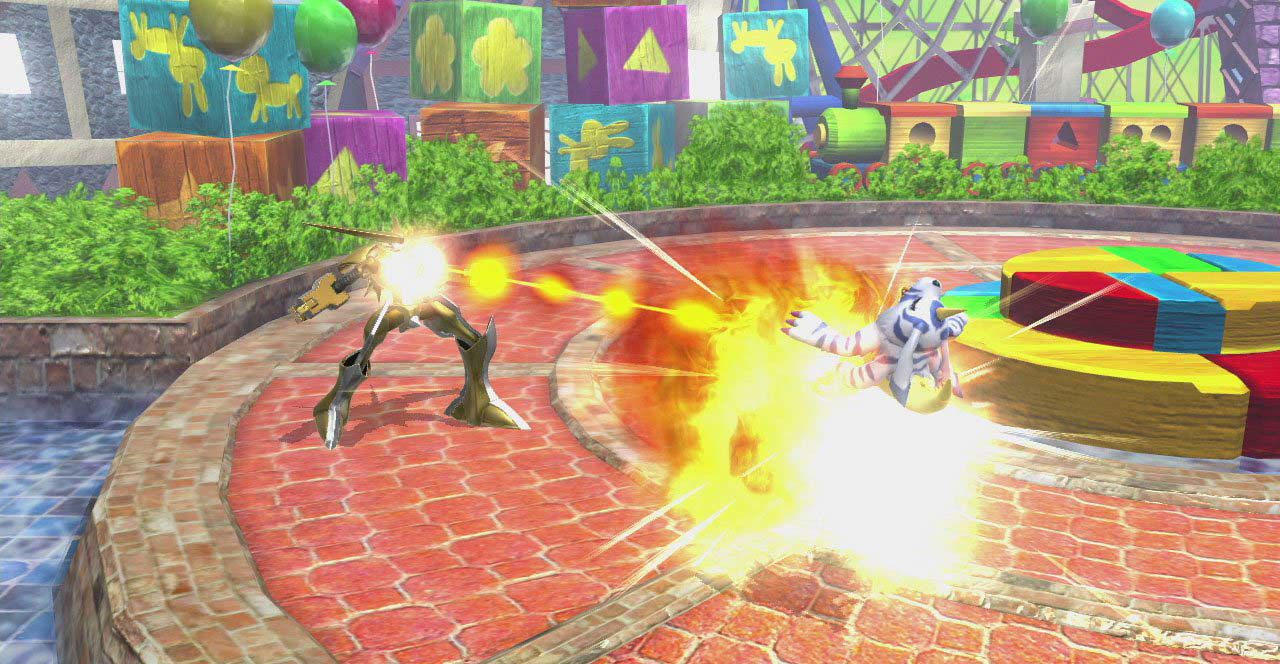 Digimon All-Star Rumble is a thoroughly half-assed attempt to usher the Digital Monsters franchise into the contemporary 3D-fighter arena. There hasn’t been a notable Digimon game brought stateside for almost a decade, and for good reason. These products consistently have the feel of low-rent Pokémon clones. Even more unfortunate for All-Star Rumble is the fact that its release has been sandwiched between the 3DS and Wii U debuts of Super Smash Bros., both of which have ironically been co-developed by Bandai Namco, the publisher of this second-rate piece of work. So, it seems fitting that instead of trying to replicate Pokémon this time around, third-party independent outfit Prope (Ivy the Kiwi?) ventures to duplicate Smash Bros., and to a greater extent, Capcom’s Power Stone. The result is a boilerplate brawler that’s almost entirely devoid of original style, and of interest only for the most faithful of Digimon devotees.

The first and most deeply penetrating nail in All-Star Rumble’s coffin is—even though it’s a fighting game, a genre that necessitates multiplayer interaction—its primary focus on the single player mode. A hurriedly slapped-together narrative sets things up: Simply put, the Digimon are bored. Their world is far too peaceful, and they’ve been unable to brush up on vital attack capabilities and various Digivolve formations in recent times. So, in a desperate endeavor to alleviate their restlessness, the virtual varmints establish a tournament to hone their skills. The overarching concept doesn’t get much more complex than this, and neither do the scenarios that pepper the solo campaign. Aside from standard K.O.-inclined perfunctory duels and big-boss encounters (and their assortment of barrels, treasure chests, crates, and rewards in the form of stat-boosting playing cards to mess around with), simplistic platforming and puzzle-solving sections are scattered throughout, presumably to curtail the monotony, but such efforts quickly go to waste. Combat can be described as generic at best; move lists and power-ups tied to the 12-character roster are rather limited, field navigation is clumsy, and levels frequently fail to take advantage of their three-dimensional settings; for all the lack of interactive environmental elements, they might as well be rendered in plain-old 2D.

Given how underdeveloped the majority of All-Star Rumble’s features are, it’s of little surprise that there’s no online interactivity to speak of. Local co-op is the sole way in which to throwdown with obliging associates, who in all likelihood will have seen the error of their ways and switched over to Smash Bros. by the end of their fourth of fifth round of banal Digi-tussling. Surprisingly, the game’s graphics aren’t all that horrendous; there’s few instances of lag and special animations, like Digivolving, are appropriately flashy. Yet, even if the bulk of All-Star Rumble’s numerous imperfections had been modified before the game saw the light of day, there wouldn’t be enough incentive to partake in its been-there-done-that faux-action when there’s so many other options out there more deserving of your hard-earned capital.