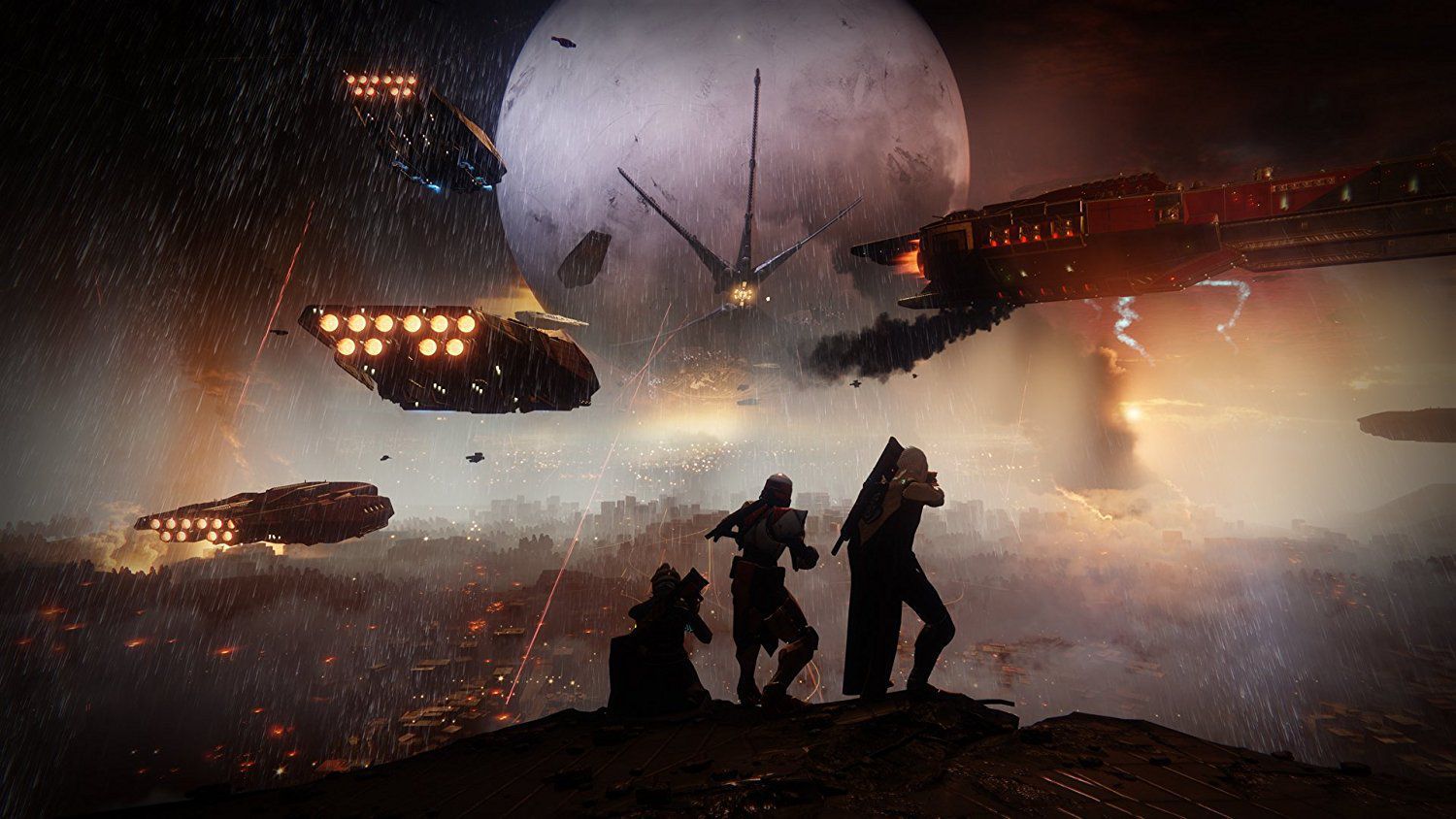 Editor’s Note: This review is based on a pre-release build of the game, playable as part of a in-house event hosted by Bungie. The build is largely representative of the Day One experience of the game, but the review may be updated should an aspect being discussed change to any dramatic degree during the launch period.

In every respect that Destiny felt forged from nail-biting uncertainty, a mélange of design decisions that would be rewritten and redone time and time again over the course of three years, Destiny 2 exudes confidence and belief. It’s a game that has no doubts as to what it wants to be, and has largely delivered a gameplay experience with the fervor that it deserves.

That confidence is obvious from Destiny 2’s first minutes, a no-nonsense barn burner of a sequence where the Tower, the first game’s starting social space, is laid to waste by an invading alien army called the Red Legion, led by a hulking goliath named Ghaul. After taking the Tower out of commission, Ghaul usurps the energy of the Traveler, the haunting planet-sized entity looming over Earth’s last safe city, leaving all of our planet’s Guardians without their phenomenal powers, and the player feebly staggering out of the city and into the wild, forced to eke out some measure of a resistance against the invaders from a farmland bivouac in the middle of Europe.

It’s a harsh reset button that Bungie executes here, leaving players at less than square one. However, the developer also performs a public service with this setup: giving the Destiny series its first straightforward story. None of the major campaigns of the first game were particularly effective at establishing or maintaining tension, investment, and thrust at the outset. Even The Taken King expansion left the Books of Sorrow—the best sci-fi storytelling in the series thus far—as an obscure collectable. Once Destiny 2’s introductory missions are over, players will know their priorities beyond a shadow of a doubt: getting your power back, finding the Tower’s scattered leadership, freeing the Traveler, and putting as many bullets into Ghaul as his disgusting face can hold. That clarity of vision makes a drastic difference. None of the missions feel like superfluous busywork. Every fight is a necessary skirmish in the desperate scrape to bring Earth and its protectors back to 100%.

As one might imagine, though, players don’t stay powerless for terribly long. A few early missions do entertain the notion of a world where Destiny’s Guardians are mere mortals—a brief, lonely period where you limp across the countryside, hunted by rabid animals and with no way of resurrecting yourself if you die. After about an hour, players will have some semblance of their regular moveset back, access to their new subclasses, and introduced to the new character-upgrade system. Destiny 2’s approach to character progression ditches the slow, interminable process of filling in circles with XP for a marginal ability boost for a streamlined branching path of earning single upgrade points every new level to put into movement, grenade, and Super enhancements, each adding decisive, noticeable changes every time.

Again, clarity is the name of the game. There’s no confusion as to the benefits of every little incremental step characters take as they level up. The tradeoff for the stronger upgrades means fewer options for customizing one’s playstyle compared to the last game. On the flipside, though, fewer options associated with each subclass means more impetus to flit back and forth between them depending on the scenario, without the constant worry of one subclass being woefully under-leveled compared to the one players get comfortable with.

More importantly, Bungie’s greatest triumph here is brutally murdering the concept of progress being tied to a routine. The first game gave the illusion of freedom, only to constantly wall itself off from players feeling truly free. Nebulous, lore-based missions with compulsory, terse exposition led to a nonstop cycle of turning in loot for currency or gear, talking to someone about a new mission, then retreating to orbit to access more. Lather, rinse, repeat, and for hundreds of hours, all dotted by notoriously slow loading times.

Destiny 2’s new worlds blossom for the player, with tasks strewn throughout the open world, the end of one dovetailing elegantly to the next from your exact location without breaking narrative stride. Some of the old niceties are gated a bit behind specific actions; weirdly, players don’t get access to a Sparrow hoverbike until some hours into the campaign. Few seem menial or meaningless, though. The rewards are immediate and, generally, resolution to every little narrative thread can be chased down with the tenacity it deserves.

That last point is a huge factor in the game’s success. Compared to its predecessor, Destiny 2 is lighter on impenetrable lore and heavier on sheer storytelling. Gone is the first game’s Grimoire system, which forced players to Bungie’s website for details that should have been in the game to begin with. In its place are more cutscenes showing the first game’s Speaker being brutally interrogated by Ghaul, dream-like sequences in forests that relate affecting little tales about the history of each Guardian subclass before players are given their new powers, exploratory missions that show us what the Red Legion has done to the worlds they’ve invaded. There’s far more interaction with the first Destiny’s staid, mission-providing leadership, all of whom display camaraderie, question the logic of a mission in real-time and, most blessedly, provide a sense of humor. The game leans perhaps too heavily on Nathan Fillion’s Cayde-6 throughout for that humor, but he’s balanced out by some breezy comedic banter, much of it offered up by Gina Torres, as Ikora, in straight-woman mode—surely to the delight of Firefly fans worldwide—but the best of which is provided by Cayde’s own gleefully schizophrenic ship A.I.

All of this would fall apart without the kinetic core gameplay, which is the one thing Bungie got unquestionably right from minute one. Destiny still plays like Halo unchained; it’s the result of years of Bungie polishing the console first-person shooter to its highest shine, enhanced by a slew of flashy, devastating superpowers and exhilarating player movement. Where Destiny 2 kicks things up a notch is in the level design, expanding the scale of even the smallest shootouts from unmemorable desolate landscapes and industrial detritus to lush, vibrant places where devastation has yielded to thriving plant life and natural beauty, even if that natural beauty is alien to our eyes.

To look at any new Destiny content from the outset is to essentially examine a foundation upon which one hopes Bungie can build cathedrals to white-knuckle, space-operatic heroism. When the first game was all said and done, we had seen an ambitious project that turned out to be disappointingly hollow in spots. The foundation that’s Destiny 2 already feels rock-solid, a refinement and reinforcement of Destiny’s best elements in every respect.