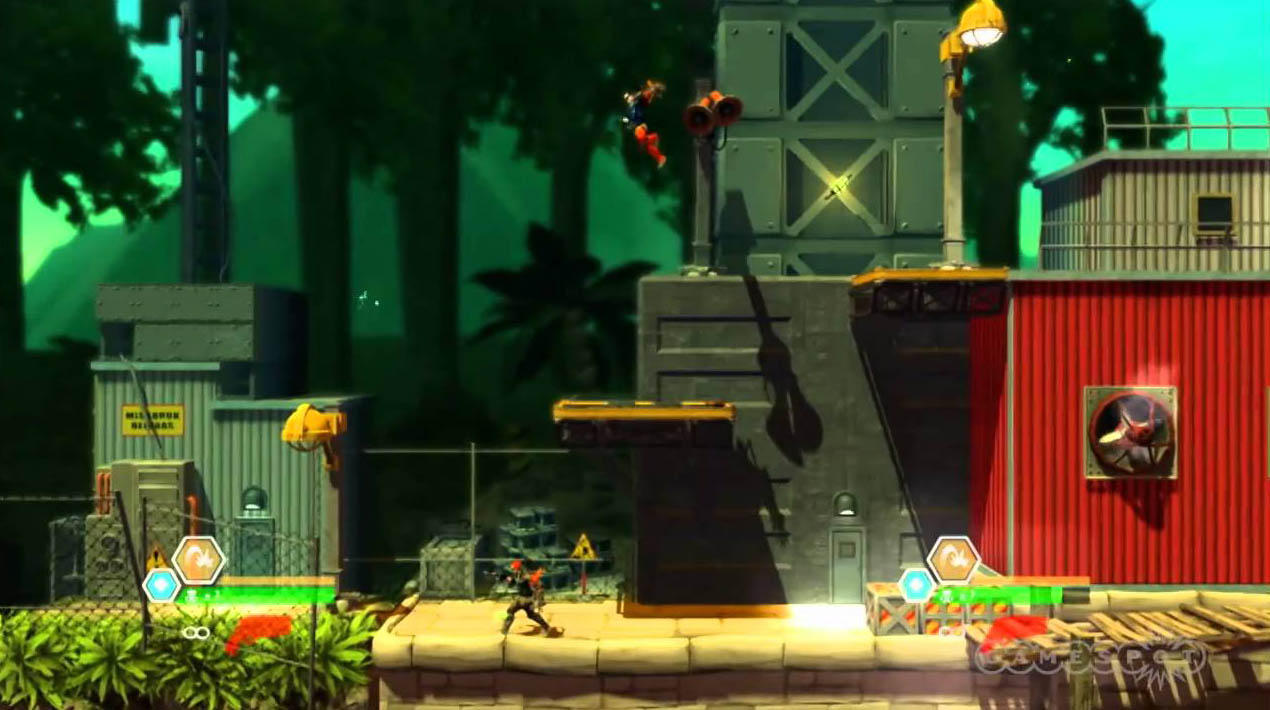 It must have seemed like such a good idea. The full 3D overhaul of Bionic Commando was a belly flop into a lava pool, but Bionic Commando Rearmed, the 2.5D remake of the original NES game, was a surprise hit. So why not sequelize the game that actually succeeded, and make a new 2.5D platformer with all the campy humor and cyborg shennanigans of BCR, but without the control quirks that drove critics like Yahtzee to such apoplexy? Turns out there’s an answer: Because those quirks defined the game, and when you remove them, you get Bionic Commando Rearmed 2, a competent platformer that’s missing all the greatness of the original.

Some of BCR2’s modernizations are welcome; sure, the regenerating health that’s been de rigeur since Halo drains some of the tension from late-stage play, but it also means far fewer incidents of controller-smashing fury when one…lousy…shot sends you flying back to the world map. And the designers have worked to come up with much more varied terrain, all of it done up in rich HD detail.

But the visual design points toward the fundamental problem with this update: However nice the jungle leaves look, if they make it hard to tell where a platform ends, then you’ve got a problem—especially since the ability to try new environments kept the designers from some of the simple and elegant silhouette art they used in BCR. It’s the same too-much-is-not-enough problem that hampers the updated controls at the center of this sequel. It’s nice to be able to jump, to initiate swings while hanging, and to adjust the length of your arm with the thumbstick. But it ultimately results in way too many situations where you can just hop through a level like a redheaded Sonic, with none of the care you had to take in the previous title.

In retrospect, making the controls more flexible was inevitably going to lead to a less thoughtful experience. The restrictive movement options made BCR as much a puzzle platformer as a combat platformer, and when I went back to play it again, I was struck by how much precise button-tapping was rewarded over quick thumbstick-jamming. For all the bang-bang, it’s a deliberate, detached experience. But like the aggro dubstep that here replaces BCR’s spacey bleeps, BCR2 provides rather generic excitement in place of compelling abstraction.

Worse yet, while incorporating more modern control flexibility, the designers succumb to modern design carelessness. In a contemporary 3D action game, there’s no point in being too precise with the position of every element; it’s a given that players and enemies should be able to find their own unique way through the terrain. But in a 2D game, placement is everything, and the levels in BCR2 are too often difficult to parse because any direction seems equally possible. The original Bionic Commando was a great innovator in adding up and down to the traditional left to right movement of the NES platformer, but the designers of BCR2 seem to have not understood how much extra signposting that requires. Most unforgivably, the game often demands that you jump off a ledge with nothing to indicate whether you’re heading toward the floor or a bottomless pit. The frequent requirement that you leap boldly into the unknown is kind of conceptually amusing, but physical predictability is the fundament of just about any good game, and BCR2 doesn’t have nearly enough charm to justify that kind of player-taunting.

BCR2 isn’t the disaster that the 3D Bionic Commando was; that stretchy metal arm remains a great way to whizz around the not-so-open plane, swinging and shooting is still fun, and (rare) flashes of the old wit enliven the writing. If you just want more of what you got in BCR, this isn’t going to fully satisfy, but it won’t crush your dreams the way some Capcom sequels have. But those of us who had our hopes raised for a great new 2.5D franchise are going to have to slink back to our Wiis and see if Mario still wants to hang out.