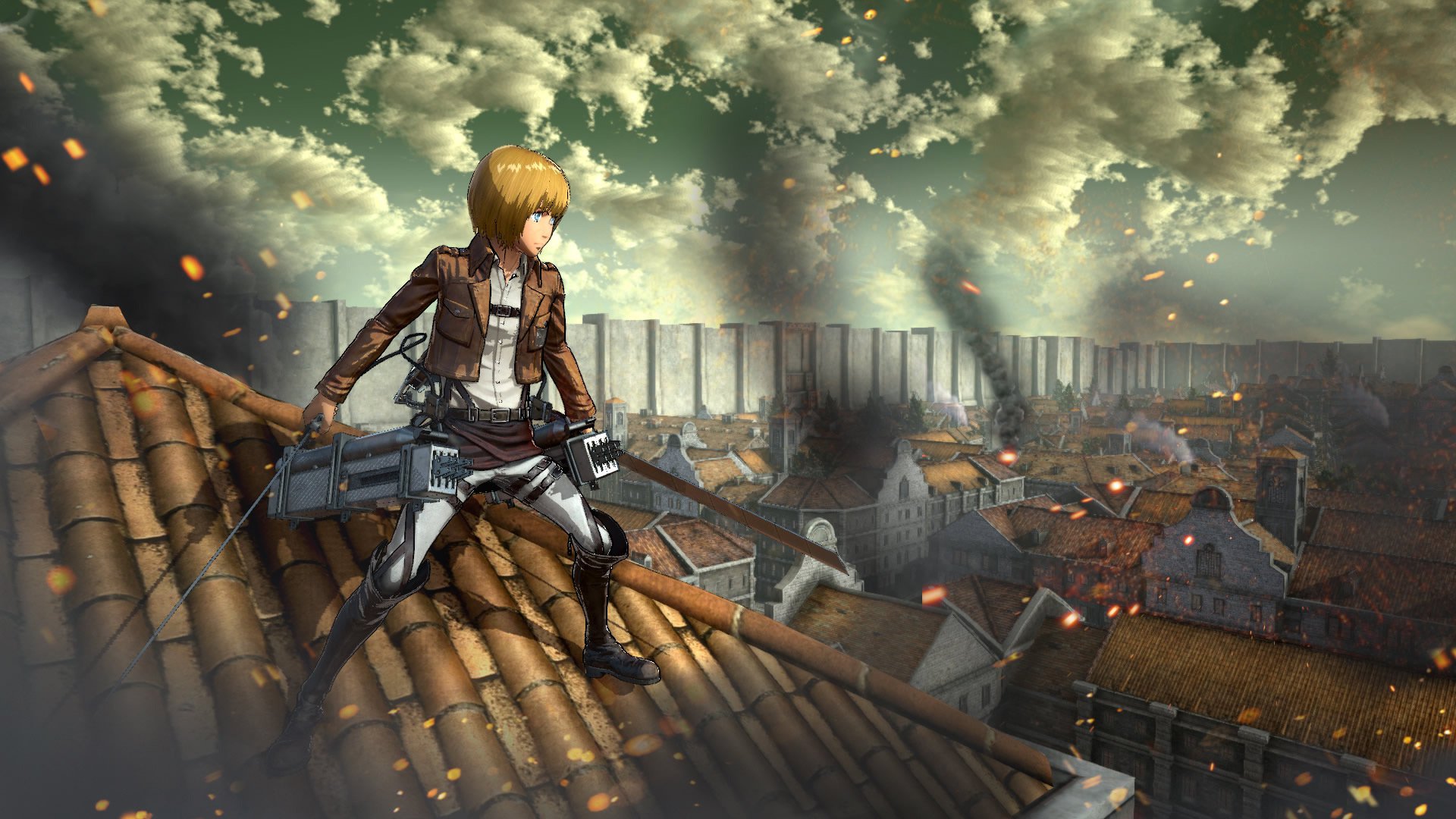 It’d be difficult for a video game to translate everything that makes Attack on Titan such an effective, harrowing story without making a 60-hour RPG. It’s a Grimm-like fairy tale by way of Robert Heinlein, marrying the provincial European sensibilities and classically scary supernatural elements of the former with the militarism and unmerciful viciousness of the latter. The most significant thing that the original manga, anime, and films have in common is their ability to evince breathtaking awe in the same moment as they induce nightmare-inducing fear and horror, with plenty to say about duty and humanity in the face of a war being lost. This is a combo that tends to elude games, outside of maybe Spec Ops: The Line. So Omega Force’s Attack on Titan doesn’t try. It settles instead for being just simply fun.

Through cutscenes, the game shorthands its way through much of the plot of the anime’s first season. We get the general setup of the last sad cloister of humanity falling victim to a massive attack by the Titans—sexless, lumbering, man-eating giants with rictus grins—and the efforts of Eren Jaeger to join the military for some good old-fashioned revenge after his mother is eaten. Most of the anime’s ancillary characters are, at the very least, introduced and fleshed out a bit, many even becoming playable. Plenty of the big plot moments are recreated admirably using the game’s cel-shaded engine. But despite some perpetual, distracting chatter during gameplay, this is a game that’s content to let players do only one thing: kill a hell of a lot of Titans.

Eren and company’s favored method of dispatching the Titans was always very video-game-ready: temporarily disable these baddies by dismembering their limbs, then kill them by severing their spine at the nape of their neck. This is accomplished with a piece of gear called the Omnidirectional Movement device that allows soldiers to grapple and swing from buildings and trees to the height of a Titan, so as to be able to slice at the giant’s neck with a blade. The core of the game is built around doing that exact thing dozens of times per stage, and it’s a really good thing that the process is so immensely and consistently exhilarating. The swinging mechanic will feel instantly familiar to anyone who’s played one of Activision’s Spider-Man titles, but with a sense of speed those games have only ever been able to capture for short bursts.

Upon reaching a Titan, however, you will quickly realize that Attack on Titan is a game that has more in common with Shadow of the Colossus. Early on, the Titans are lightweights that go down with one simple slash, as long as you can swing up to their necks, but larger, tougher variants will protect their weak spots by reaching out and grabbing soldiers with greater frequency and accuracy, in addition to showing up in greater, overwhelming numbers.

On top of all this are all the other considerations one must make during a battle. Blades become dull and damaged and must be replaced. Gas for your omnidirectional gear can run out at the worst times. Some Titans with high HP can’t be taken out efficiently without help: by recruiting soldiers from other squads on the battlefield. Slaying a Titan with a single slash is visceral and cathartic, and chaining kills together is a joyous feat of acrobatics, but earning the kill with an expert strategy is when the game gets close to greatness.

That greatness isn’t necessarily negated by the game’s rougher edges, but it’s slightly dulled. Attack on Titan is built on the same bones as Omega Force’s bread-and-butter Warriors, a.k.a. Musou, meta-series, for better and for worse. The good is that the game gives players wide open spaces to swing and fight in, and admirably recreates the anime’s finest set pieces, while also ensuring that the battlefield stays busy, full of distress calls, backup squadrons, and skirmishes that play out half a mile across the stage. The only huge difference between this game and the Warriors titles is that, instead of having to confront, at most, hundreds of cannon-fodder enemies, players will only deal with a couple dozen at a time. It’s a fact that works to Attack on Titans’s detriment, highlighting just how little the enemies in the game are capable of, and how little variety there is in their design.

While the game’s source material offers plenty of opportunities for variations to the core gameplay, the developers settle for ramping up difficulty or stakes by constricting you to playing as the weakest character on the roster. They also rely on a particular unkillable Titan variant late in the story to act as a persistent boss fight. The game occasionally changes things up in some areas, allowing players to fight as a Titan. These areas are enjoyable, allowing for short, maniacal periods of kaiju-style mass destruction, but they’re few and far between, until the game is beaten, and the feature can be used at will.

And yet, there’s something to be said for the fact that Attack on Titan delivers so very well on its core mechanic. This isn’t the kind of game that necessarily warrants a complete replay, especially not when the manga and the anime offer a much more in-depth and nuanced telling of this tale, but tooling around for a mission or two, flying between buildings looking for Titans to slay is an evergreen sort of joy, one that has few, if any, analogs in gaming.