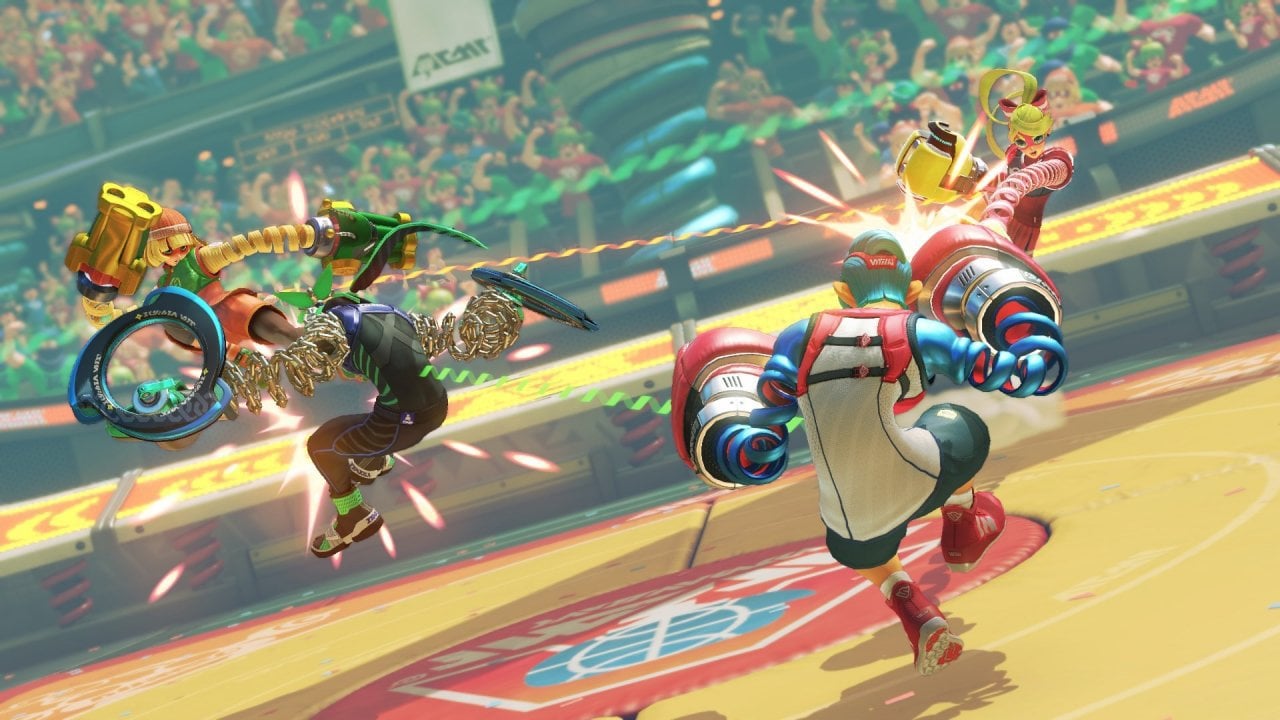 Most fighting games are cut from the same cloth as trailblazers like Street Fighter II and Virtua Fighter, beholden to side-view perspectives and an array of melee and projectile attacks. These longstanding norms can grant a sense of familiarity even to the weirdest of the weird, from Ballz (where all combatants are made of, that’s right, balls) to Primal Rage (where seven prehistoric beasts duke it out and eat humans between blows). But Arms truly strikes a bizarre path within its genre, putting the camera right behind the player’s avatar and equipping each character with an assortment of arms that can nearly stretch the length of any arena in the game. Even though it might take several hours for players to get used to this unusual brand of boxing, it’s hard not to admire the daringness with which Nintendo shakes up a conservative genre with the creation of this entertaining new sport.

The basic rules of Arms are straightforward. You can jump, dash, throw punches, block, fling an opponent, and perform a multi-hit super move after you charge up enough energy via punching. Motion controls or a standard controller can be used to play, though the latter option is more responsive to the player’s intent when it comes to, say, executing a quick right-left combo rather than launching both arms for a throw. Before each fight, you must customize you arms, which, depending on your character, can be fitted with everything from boxing gloves to dragonheads that spit fire. That the left and right arms can be very different weapons encourages an attention to footwork and spacing that, as in boxing, separates the wannabes from the winners.

A variety of factors make fights trickier and enable strategic options that go beyond those of the standard fighting game. If you launch an arm into your opponent’s arm, the effects will vary. If the arms are similar in strength, they’ll stop each other. If one arm is bigger, it will brush aside the smaller appendage for perhaps a direct hit. Players can throw straights or hooks with either their right or left arm, so guessing the trajectories of the Slinky-esque limbs is essential to dodging and countering. All the while, rivals must deal with the environmental factors of the different arenas, such as steps that can give an advantage to a higher-positioned fighter or hover platforms that allow one to zip around at an elevated level. One of the joys of Arms is discovering the ways you can exploit various components at play here so as to make a strong offense your best defense, or vice versa, and ensure victory for yourself.

Unfortunately, unfair or simply cheap components abound throughout the game. The inclusion of Byte & Barq rejects balanced one-on-one competition by forcing the opponent to account for two entities at once: a big police robot, who has arms like the rest of the cast, and his dog, an AI-controlled helper that can attack and serve as a platform for the officer. What’s more, timed power-ups can restore health and charge up one’s super move faster, but these rewards arbitrarily favor whoever happens to be near them when they materialize in the heat of battle. And for a game that wants players to pay more attention than usual to the dynamics of left and right punching, Arms shifts the focus away from fighting with random volleyball, basketball, and target-practice matches that seem beside the point.

Still, there’s something to be said about Nintendo throwing such curve balls to keep players from becoming complacent. Arms also demands skill and awareness in that online ranked matches become available only after the single-player mode is completed on normal difficulty (however, despite unlocking the ranked option, I could only get unranked matches to work). Unlike many other fighting games (including the recent Tekken 7), the average difficulty setting in Arms, expressed in game as a four out of seven, provides a stiff test, as the computer will punish you if you overlook the intricacies of the rules and fail to develop strategies to account for the different types of arms that your opponent may use. It’s more than a little ironic that a game that banally frames its fights as part of a television show can restore some excitement to a genre notorious for resisting significant change.