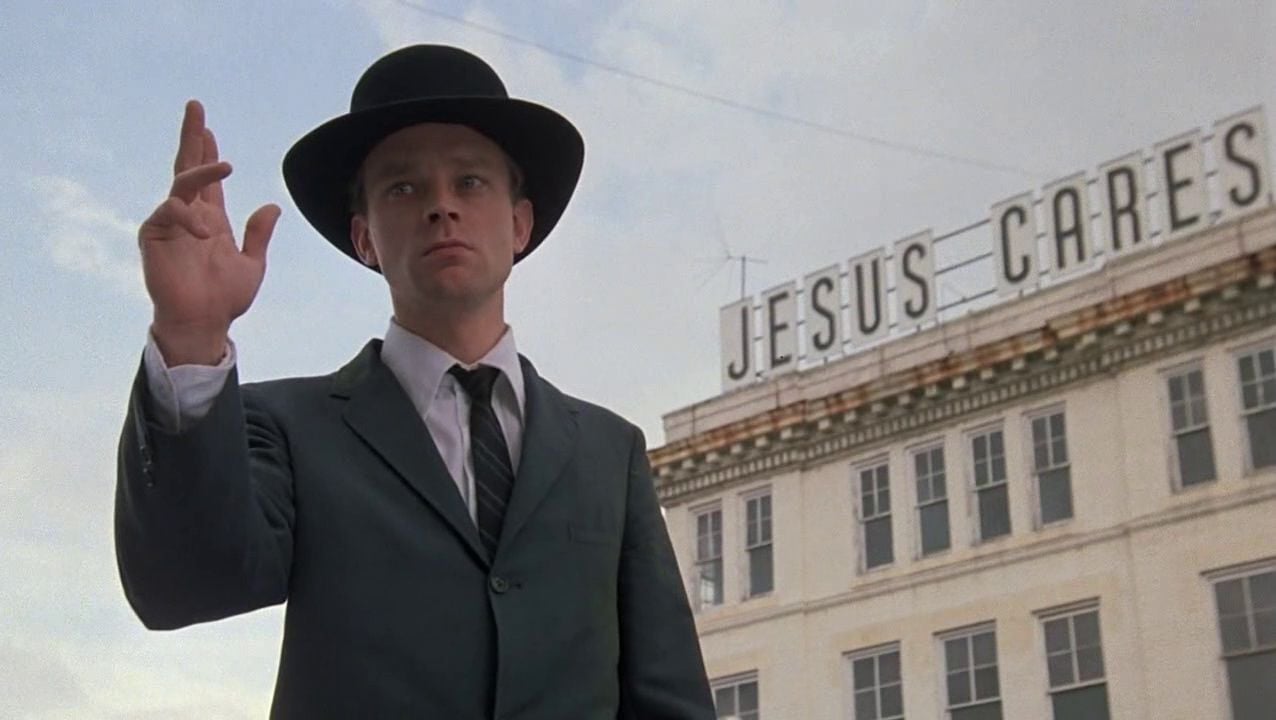 John Huston, celebrated for star-driven literary adaptations of macho genre fiction like The Maltese Falcon and The Man Who Would Be King, occasionally turned his attention to higher-brow fare like Reflections in a Golden Eye, The Dead, and his late-career, counterintuitive version of Flannery O’Connor’s darkly comic 1952 debut novel Wise Blood, billed by her publisher as a work of “sin and redemption,” O’Connor’s tale is the odyssey of Hazel Motes (Brad Dourif), a newly discharged veteran who angrily denounces Christian orthodoxy by taking to the streets of a small, indifferent Southern city to preach the message of his Church Without Christ, a blasphemous belief system where “the deaf don’t hear, the blind don’t see, the lame don’t walk, and the dead stay that way.” Huston’s take on the evangelical milieu isn’t far short of contemptuous (aided by Alex North’s insistently ironic musical adaptations of trad pieces like the “Tennessee Waltz”), but as embodied by Dourif’s blazing eyes and petulant, thrust-out jaw beneath his big-brimmed black hat, Hazel’s crusade of denial and self-martyrdom displaces the jaundiced spoofing with a peculiar striving for sainthood.

Haunted by recollections of a fire-and-brimstone grandfather (Huston) and his own childhood penance of walking in rock-filled shoes, Motes doesn’t draw committed disciples with his heresies but a gallery of rogues, including a faux-blind preacher (Harry Dean Stanton) and his conspiring, Haze-crazy daughter (a blissfully cracked Amy Wright); a manic, unbalanced teenager (Dan Shor) obsessed with his alleged prophesying gift of “wise blood” and a shrunken mummy in the local museum; and a slick grifter (Ned Beatty in a perfect cameo) who, having failed to persuade the maverick to partner with him, goes into business with an outfitted Motes stand-in (William Hickey). Undaunted by the populace’s deafness to his gospel as well as other realities (“This is a good car,” he baselessly assures everyone of the leaky, smoking wreck he drives), Dourif’s Motes spirals into the girl-child’s bed and homicide before he turns with single-mindedness toward expiation.

If the film fails to find many visual metaphors for the book’s focus on the interior struggle of its antihero (O’Connor wrote that Motes was plagued by a shadowy Christ moving “from tree to tree” in the back of his mind), its use of grotesque frissons, like Wright’s Madonna-and-child pose with the pilfered mummy, and salt-of-the-earth bit players balances the broad, wacky-cracker antics of Shor’s moron in particular. The budget-limited choice not to set the film consistently in the novel’s period—the urban scenes are clearly contemporary despite occasional mid-century vintage trains, cars, and clothes—further lends a surreal timelessness. “The world’s an empty place,” Hazel’s lonely landlady (Mary Nell Santacroce) assures him once he’s taken up self-mutilation as his means of atonement, but Huston’s Wise Blood is a sharp, busy canvas that, like a man with a good car, doesn’t need to be justified.

The Criterion Corner: Dusan Makavejev’s WR: Mysteries of the Organism