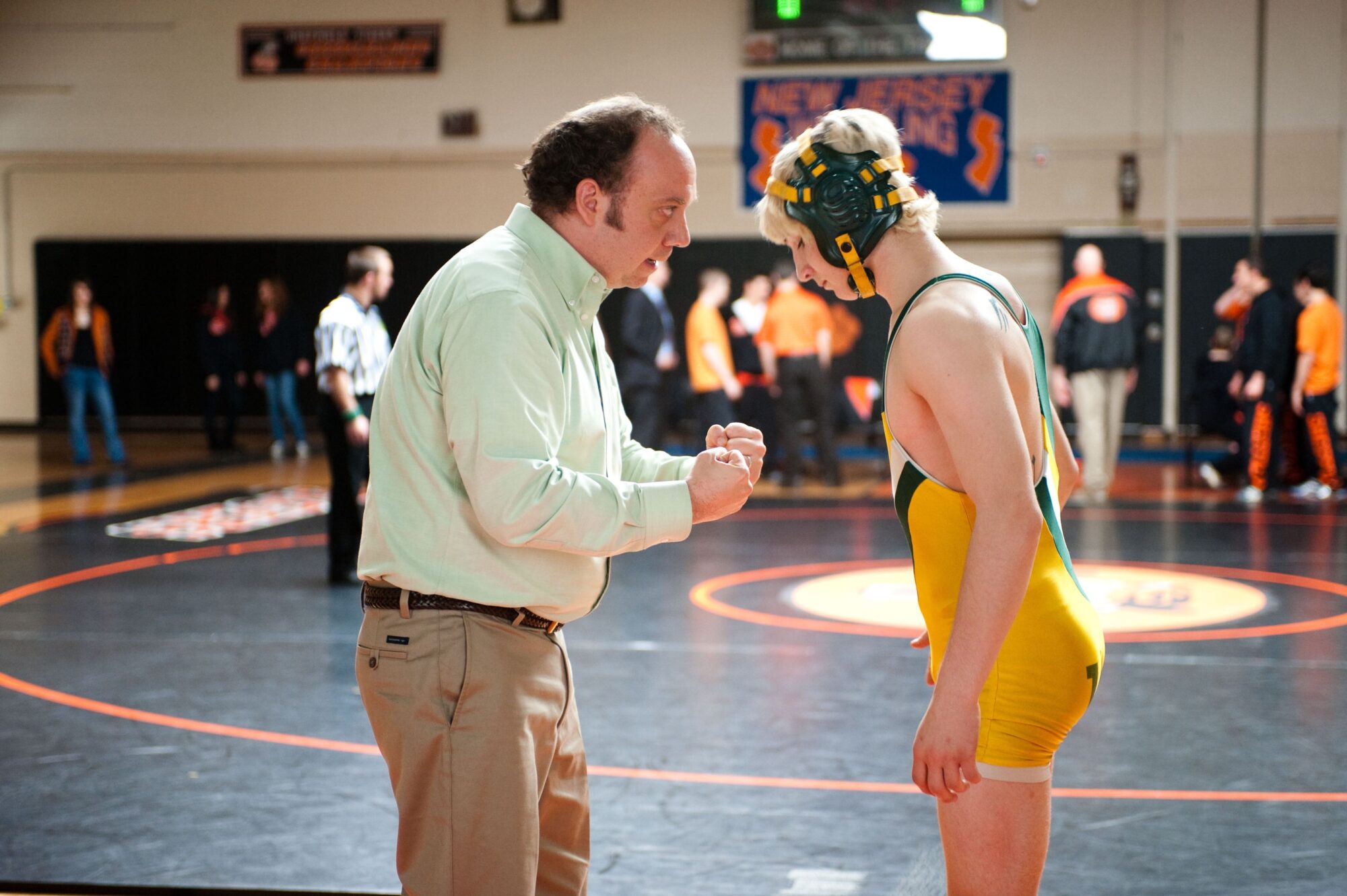 The title of Thomas McCarthy’s third feature, Win Win, is an overstatement, as it’s more like a draw draw, just barely balancing its everyone-learns-something uplift with ragged emotional dynamics and unexpected humor. His script proving sharpest when leisurely advancing its plot through scenes of everyday suburban family life, be it weekday breakfasts, restaurant dinners, or bedroom chats, McCarthy’s story revolves around Mike Flaherty (Paul Giamatti), a struggling New Jersey attorney who spends his evenings coaching high school wrestling. Mike is in the hole financially, and thus winds up susceptible to his own less-than-moral inclinations when dementia-addled Leo (Burt Young) becomes his client. Sensing an opportunity to make some easy cash, Mike argues in court that he should become Leo’s guardian—since Leo’s daughter Cindy (Melanie Lynskey) is unreachable in rehab—and will help him reside in his own house rather than an elder care facility, a job that will net Mike $1,500 a month.

Once he becomes legally responsible for Leo, however, Mike immediately backtracks, dumping him in a nursing home (dishonestly informing Leo that’s what the judge ordered) while continuing to collect his monthly fee. As befitting a too-good-to-be-true ruse, complications soon arise when Leo’s grandson Kyle (Alex Shaffer), a bleach-blond kid who speaks in overly polite monotone, shows up with a black eye, having apparently run away from his Ohio hometown to live with Leo. Mike and wife Jackie (Amy Ryan) reluctantly take Kyle in, and wouldn’t you know, the kid is a state-champion wrestler, which is a boon to Mike’s team. Things proceed swimmingly for a time, with even Mike’s angrily divorced friend Terry (an amusing Bobby Cannavale) and his sullen assistant coach Stephen (Jeffrey Tambor) energized by Kyle’s wrestling prowess, but the other shoe must drop, and it does with a predictability that, like much of Win Win’s third act, has the flatness of a morality tale spun from worn thread.

McCarthy’s direction is clean and he’s good with characters and incidental domestic details, so that a scene of Mike wishing the family goodbye in the morning, replete with Jackie gently hounding him about having a front-yard tree cut down by professionals, rings true. And Jackie in particular is an invigorating presence, an angry-Joisey caricature (replete with a Jon Bon Jovi ankle tat) into whom a superb Ryan breaths believable, full-bodied life, casting her as the type of mom protective enough to crave fisticuffs, but smart enough to know better. It’s disappointing, then, to find that, despite embroiling its characters in thorny ethical and legal quandaries, Win Win is after only uncomplicated tidiness. Predicaments are resolved with only minimal suffering for everyone involved, as—rather than bluntly tackling Mike’s duplicity as behavior with unavoidably unpleasant consequences—McCarthy warps his scenario via formulaic revelations and altercations into something comfortingly feel-good.

Giamatti’s performance exudes typical nuance, but other than during a wrestling-practice outburst of suppressed frustration and rage, his sad sack comes off as a rather featureless everyman, and one whose attempts to perpetuate an unsustainable situation are driven by counterfeit economic-tough-times hardship. For all its recession-based anxieties and desperation, the film is really a safe fairy tale in which there’s no meaningful penalty for misconduct so long as it’s driven by noble (or at least understandable) gotta-feed-the-kids intention. Even a climactic courtroom showdown never materializes because McCarthy ultimately doesn’t have the heart, stomach, or sobriety to truly confront or grapple with the ramifications, however undeserved, that stem from good people acting badly. Instead, he feigns seriousness while delivering a story whose main message is simply: In tough times, bartending’s not so bad.