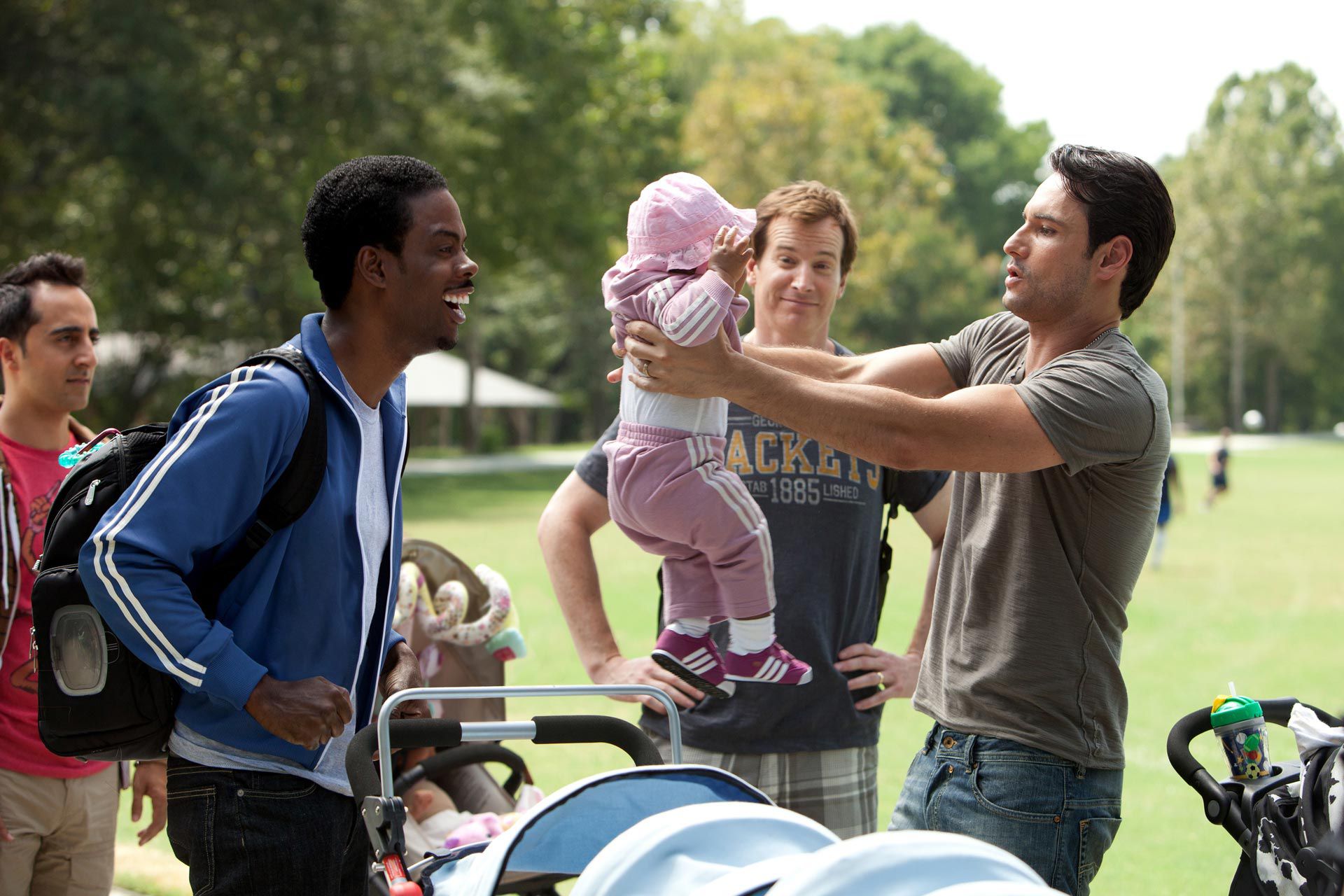 Kirk Jones’s What to Expect When You’re Expecting takes procreation not only as its central theme, but as a given. In detailing the ups and downs of five couples preparing for the latest addition to their family, the film offers up a range of situations, problems, and attitudes toward the impending events. But mostly the movie’s varied storylines cough up the same platitudes: being pregnant sucks, having young children is a misery, but it’s all worth it when you’re holding that newborn in your arms.

It’s the inevitability and uniformity of the film’s attitude—as well as the desperately strained and unfunny way in which it puts it across—that’s bothersome. Consider the one storyline with any potential to tweak the formula. While Holly (Jennifer Lopez), a hardworking freelance photographer who can’t have children, prepares to adopt a child from Ethiopia, her somewhat reluctant hubby, Alex (Rodrigo Santoro), hems and haws. Although this narrative thread, unique among the film’s plotlines, presents a female character who can’t conceive, poses the question of whether or not the couple can actually afford to have a child, and puts forth the idea that the desire to have one might not be a given, the filmmakers quickly dispense with these complexities. In the film’s most regressive moment, Holly laments her inability to fulfill what she considers to be womankind’s one essential role, to give birth, while there’s never any thought that Alex might express his uncertainty to Holly, instead choosing to simply complain to friends and accept the inevitable.

Similarly, when young food-cart vendor Rosie (Anna Kendrick) is knocked up by a hunky fellow vendor, there’s never any question that she might not want to ruin her life by having an unexpected child. (Let’s just say the word “abortion” is never uttered throughout the film.) When she suffers a miscarriage, she vows to try again when she’s ready.

The other characters are more or less secure in their attitudes toward parenthood and their financial status, so their concerns are of the decidedly more minor variety, often presented in a (only inadvertently funny) comic vein. Wendy (Elizabeth Banks), a breast-feeding advocate, gives a keynote lecture that turns into a hormone-driven meltdown (she’s in the late stages of pregnancy). Her father-in-law, ex-race car driver Ramsey (a delightfully over-the-top Dennis Quaid), awaits his impending late-life fatherhood with characteristic arrogance, treating his relationship with his son Gary (Ben Falcone) as an ongoing competition. And reality show host Jules (Cameron Diaz) and her partner Evan (Matthew Morrison) debate whether or not to circumcise their kid.

Into this overstuffed mix comes a “dude’s group,” a get together of dads who take their young kids to the park and bitch and moan about fatherhood and whose chief function seems to be to allow Chris Rock to reiterate his now stale comic shtick (watch him up the film’s “edgy” factor by talking about “vaginas”!) and to show our bunch unfunnily pushing their strollers in slow motion to the strains of the Notorious B.I.G.’s “Hypnotize.” (In this largely sanitized production, the directors can only muster the song’s radio edit, which tellingly bleeps out the word “bullshit.”)

Early on in What to Expect When You’re Expecting, in a scene indicative of the movie’s sensibility, Wendy announces her pregnancy by interrupting her hubby as he swims laps in the pool, the couple’s excitement causing them to veer over into another lane and earn the ire of an elderly swimmer. While the latter’s complaints are meant to be humorous (who does this old man think he is interrupting the couple’s happy news?), they actually seem like a legitimate beef. For self-obsessed Gary and (especially) Wendy, all that matters is the fact that they’re going to achieve their ultimate purpose in life, to become parents, and everyone else is either the subject of complete indifference or comic derision. It’s an attitude that the film shares and takes care to inscribe into scenes such as this. Obviously the movie’s main characters are the ones we’re meant to focus on and care about, but this obliviousness on their—and the film’s—part to everything outside the fact of their upcoming pregnancy and their petty problems is all too symptomatic of What to Expect When You’re Expecting’s smug acceptance of the sacredness of a single (straight, married with kids) lifestyle.