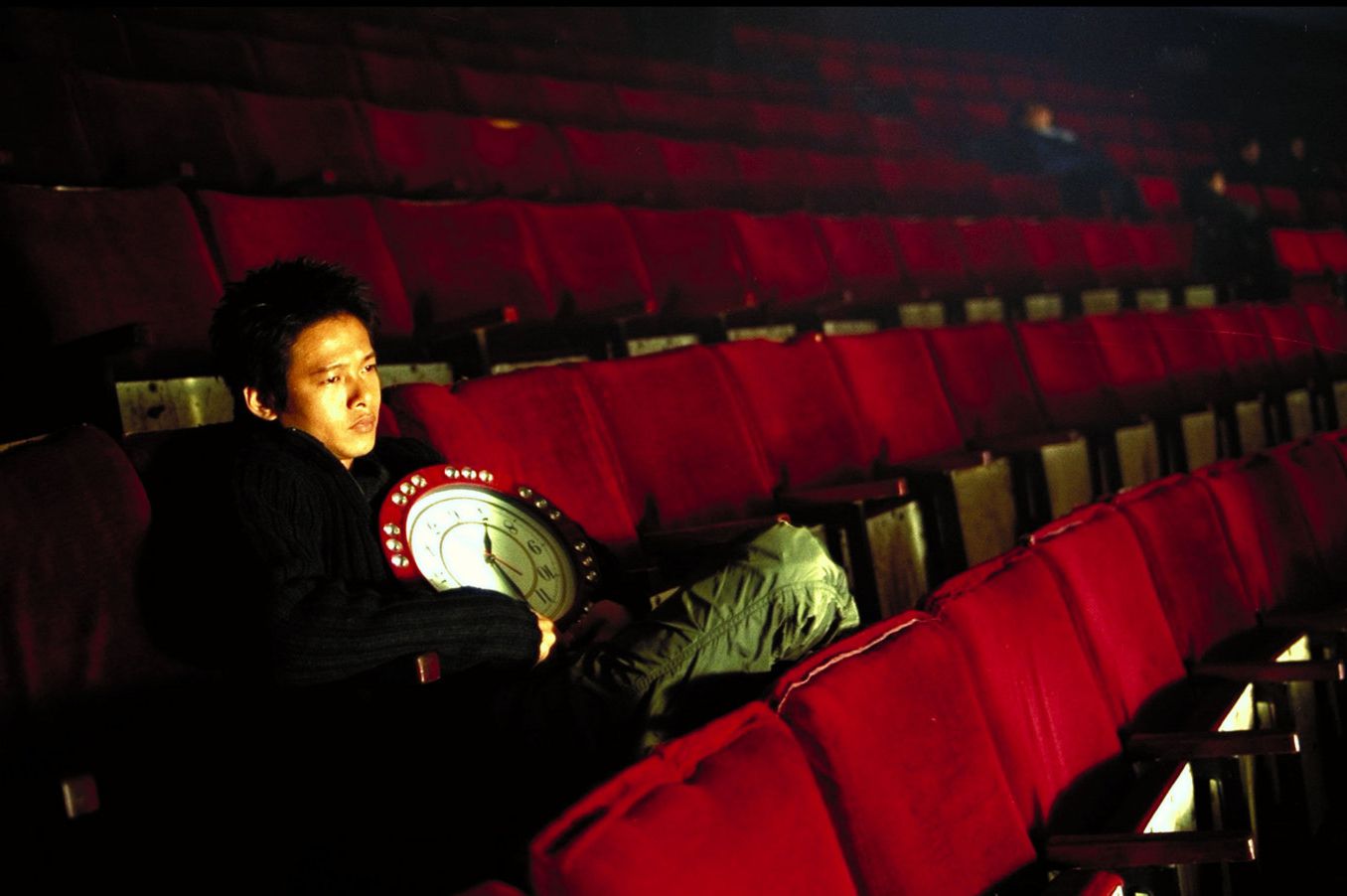 The emotionally disconnected characters of Tsai Ming-liang’s What Time Is It There? wade through their sterile Taipei surroundings hopelessly grasping for a piece of human comfort. After the death of the film’s patriarchal figure (Miao Tien, visually ensnared throughout the lonely opening scene), his wife (Lu Yi-ching) and son (Lee Kang-sheng) become victims of the mundane and the repetitive: she to reincarnation and he to bottles and plastic bags-turned-urine depositories (he’s afraid to go to the bathroom at night for fear of bumping into his father’s spirit). Kang’s job as a watch salesman morphs into an existential crisis: The wristwatch he sells to an aggressive young girl, Shiang-Chyi (Chen Shiang-chyi), becomes a link between Parisian and Taipei loneliness. Initially wary of selling the watch (he believes it to have a connection to his father), Kang caves in to the girl’s aggressive demands. When Shiang-Chyi travels abroad, though, Kang resorts to a bizarre yet humorous comfort ritual: he sets all the Taipei clocks he sees to Paris time in a pained, abstract desire to connect with Shiang-Chyi.

Tsai’s compositional dynamics owe as much to Ozu and Antonioni as his penchant for stillness is indebted to Bresson; his wider long shots are densely layered, his exterior scenarios recalling Antonioni’s cityscapes, inundated by consumerist signs and symbolic of emotional remoteness. Although Tsai’s camera never moves during the duration of the film, its self-consciousness is appeased by its organic, voyeuristic attention for filmic space. Much of the film’s action transpires inside (homes, cars, trains, movie theaters), with characters seeking shelter from the outside through the creation of indoor safety nets. The irony, though, is that both the film’s inner and outer realms prove equally clogging; Yi-Ching’s plant and overgrown pet fish are as constrained by their glass walls as Yi-Ching is by the apartment windows she hopelessly tries to block.

Tsai’s Paris is devoid of cultural markers, presented as abstractly inescapable as his own Taipei. Shiang-Chyi’s character is a tourist in Paris but her relationship to the city is relatively loveless, if not entirely claustrophobic (when she isn’t crowded into a subway car she becomes the second-hand victim of an angry Frenchman’s phone tirade). Tsai is less contemptuous of Shiang-Chyi’s Parisian surroundings than he is concerned with the woman’s detached relationship to the world as a whole. Shiang-Chyi stares shyly at an Asian gentleman from across a train station’s platform. Her gaze suggests a girl desperate to wean loneliness by connecting with a familiar face. Though Shiang-Chyi remains a relatively abstract figure, her fascinating run-ins with several cosmic figures (including Jean-Pierre Léaud at a cemetery) evoke a ghost discarded from a polluted Taipei.

A burst of sexual activity simultaneously rocks the lives of the film’s frigid heroes, but the irony is that their comfort is compromised: trying to recreate coital bliss before a picture of her departed husband, Yi-Ching puts Charlotte Rampling’s self-pleasure from Under the Sand to shame; Kang finds comfort with a prostitute; and Shiang-Chyi’s relationship with a fellow Asian woman in Paris culminates in a failed Saphic love session. It all comes back to the issue of time, which Tsai views as an immutable burden that people nonetheless seek to control. Kang’s prostitute slithers into the night with a stolen package and expedites Kang’s freedom from his isolation while a ghostly visit to Shiang-Chyi (sleeping by a Parisian lake) evokes a spiritual catharsis. The moment is somewhat at odds with the film’s otherwise constrained worldview, suggesting that Tsai’s creatures are, at least subconsciously, open to emotional release. Like ghosts, they seem painfully aware of not existing in a world constantly ticking to remind us of our looming demise.