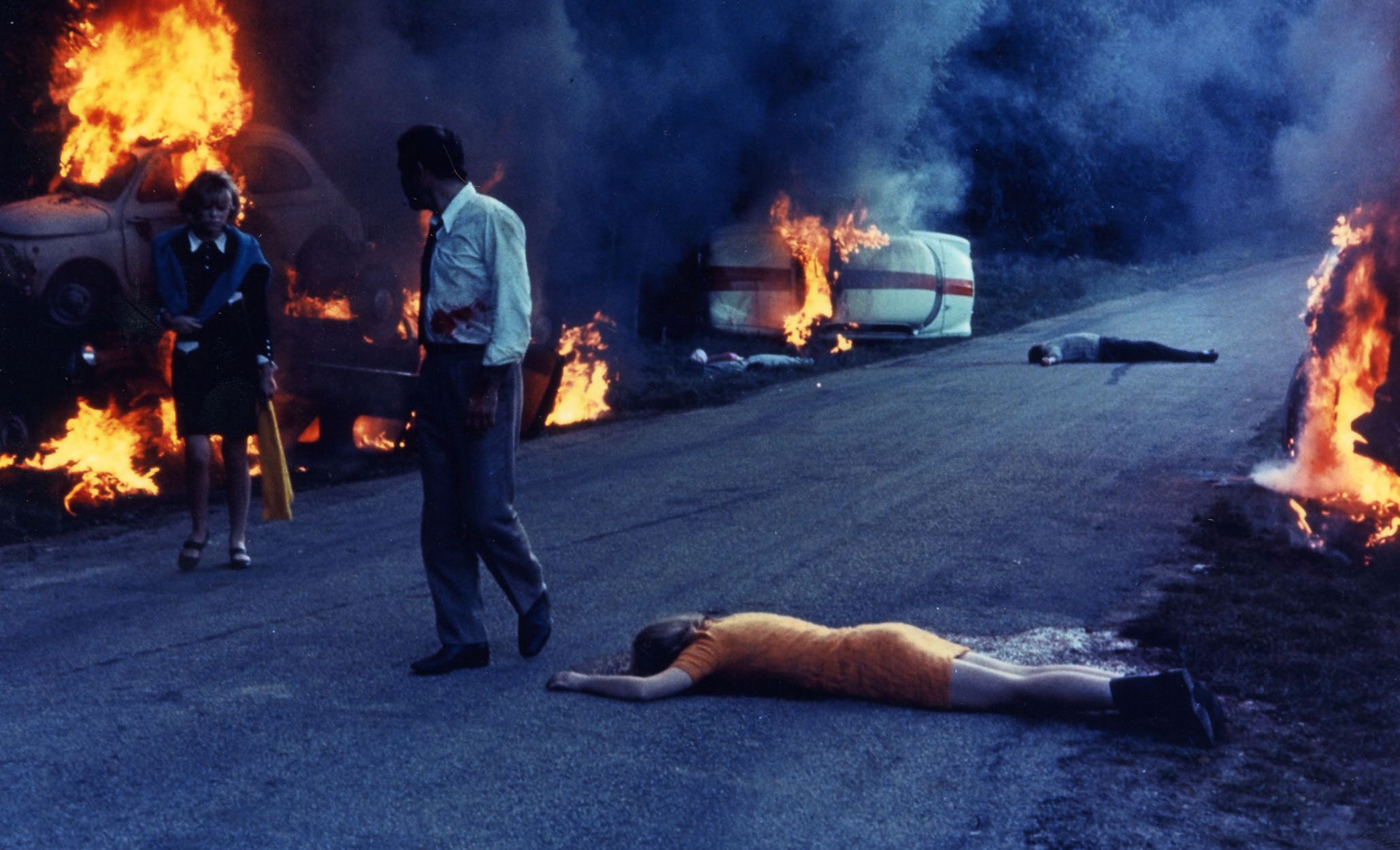 It’s perverse how cleanly a film as philosophically and emotionally wrecked as Weekend divides Jean-Luc Godard’s filmography into neat halves (for lack of alternate salience, his Hollywood period before Weekend and his anti-Hollywood period since), and how a film so compellingly nihilistic is also a pretty good approximation of a cinephile’s idea of a good time. The film follows Corinne and Roland, a married couple who can’t stand each other and secretly plot to kill the other, as they drive from their station of urban ennui out to the French countryside in hopes of snatching away Corinne’s ailing father’s inheritance away from her mother. Unfortunately for them, their journey is beset by a series of Buñuellian obstructions (including a hitchhiking character called “el ángel exterminador”) that begins with a cataclysmic traffic jam-cum-parade (detailed in a bravura 10-minute tracking shot that iconographically portends nearly everything that will follow) and devolves from there. The two paragons of capitalistic personal enterprise are thrown into Godard’s matrix of aphorisms and promulgations where the unwritten rules of narrative filmmaking are deconstructed and trashed wholesale in a formal mirror of their own classist debasement.

Weekend is subtitled “a film found in a dump” in one of the film’s copious intertitles, but oddly enough this designation is worn as a badge of authenticity, given that the most erudite mouthpieces for Godard’s political stance are arguably the two sandwich-chewing garbage men—sophist trash collectors who spin indignant Marxist litany as though they were trading fours—who Corinne and Roland hitch a ride with after their own sports car is destroyed in one of the film’s continuous car wrecks. The interlude devoted to their spiel is probably the most doggedly un-cinematic, un-narrative stretch of the film (when one talks, Godard insists on showing the other one in tight close-up, staring blankly and eating) and the one scene where dialectic becomes diatribe, indicating just how far the film director/rhetorical muse was willing to go to stress the latter.

Otherwise, Weekend is a luridly colorful compendium of aesthetic juxtapositions and audio-visual schisms that evoke the frustrated tenor of the era. The film’s characters draw attention to the fact that they’re in a movie, then aren’t so sure of the false nature of their own violent natures when they set “Emily Bronte” on fire and notice her crying. Title cards frequently intrude upon scenes to discredit the scenes surrounding them. Fades are deliberately miscued, camera angles obfuscatory. The film jumps its sprockets when Roland and Corinne crash their own car (a disaster met with Corinne’s immortal, anguished assessment of their loss: “My Hermés handbag!”). Godard calls Jesus a communist (as he would shortly declare of himself during the Left Bank uprising of ’68), but paradoxically calls Christianity “the refusal of self-knowledge, the death of language.”

Because Godard takes such a blazing swan dive into his own bilious socio-political contempt for all the inhumane, consumer-centric, anti-intellectual bullshit that modern civilization had collectively, if subconsciously (make that “non-consciously’), declared its contribution to mankind’s notion of progress; because it’s his most poetic prickishness, Weekend ironically endures as probably Godard’s most beloved film. Unlike most of his later tirades which stand on their own artistic merit but convert precious few, its vision of mankind’s secret hope for eschatological redemption—or a reset button in John Carpenter’s extremely underrated Escape from L.A.—is buttressed by a compelling, unabatedly distressing formalism that stands nearly alone among movie visions of the end times. At least, according to Armond White, until Godard’s archenemy Steven Spielberg’s recent War of the Worlds, which is an equally brutal road movie that’s constantly on the precipice of humanity’s ultimate destruction. I would call Marxism the resolving “germ” that brings Weekend’s nightmarish invasion to a tentative halt if Godard hadn’t ultimately thrown both it and human flesh into the same rusty frying pan.