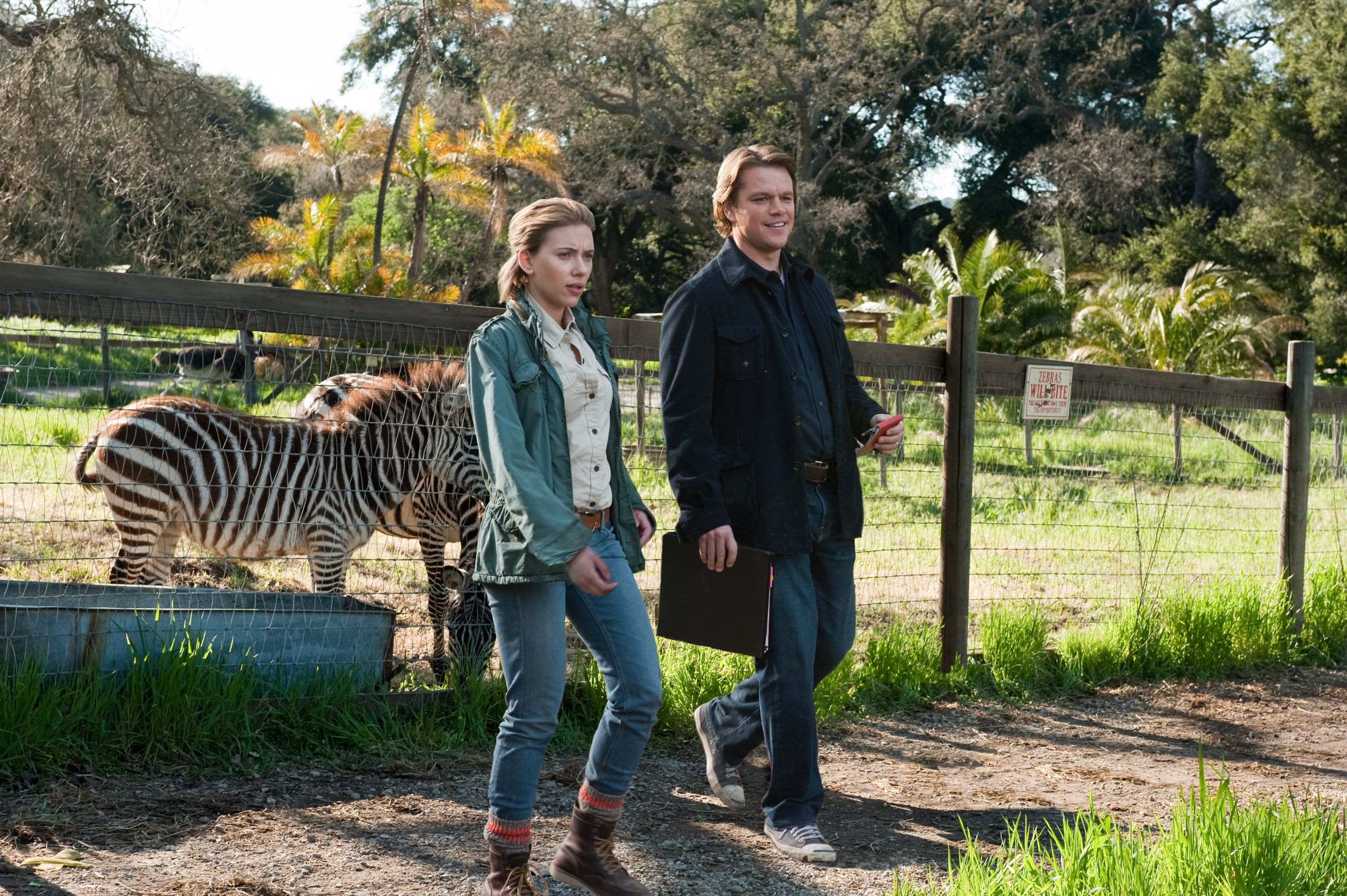 Clichés and contrivances and corniness, oh my! With We Bought a Zoo, writer-director Cameron Crowe dives headfirst into the schmaltzy slop barrel, delivering one aw-shucks incident after another via the true-life tale of Benjamin Mee (Matt Damon), who, in an attempt to cope with his wife’s untimely death, uproots himself and his two kids, troublemaking 14-year-old son Dylan (Colin Ford) and adorable seven-year-old daughter Rosie (Maggie Elizabeth Jones), to a big rural Southern California house. The catch? It’s actually a zoo, and the owner is required to maintain the facilities and care for the animals, a hitch that’s not really a hitch at all for Benjamin, who, despite the logical protests of his older brother, Duncan (Thomas Haden Church), throws caution to the wind solely because, upon first visiting the property, he spies Rosie happily feeding some peacocks and—with music swelling and the sun shining brightly from behind his head—he just can’t help himself. That buoyant score and angelic daylight is revisited regularly throughout, all to increasingly head-smacking effect, as Cameron wastes not a single opportunity to drench his material in mushiness, from periodic talk about “letting a little sunshine in” to the convenient romantic relationships that fall into both Benjamin and Dylan’s laps in the form of the zoo’s manager, Kelly (Scarlett Johansson), and her teen niece, Lily (Elle Fanning).

At their new home, Benjamin and the kids discover a motley crew of helping hands who, from angry drunk Peter (Angus Macfadyen) to monkey-on-shoulder Robin (Patrick Fugit), boast one descriptive trait and narrative purpose. That schematic scripting is rampant in We Bought a Zoo, which also places, as an impediment to Benjamin’s zookeeping success, financial difficulties and a mean inspector (John Michael Higgins), with the former resolved through a laughable deus ex machina and the latter dealt with by simply softening the pseudo-evil character. Such cheap devices are indicative of Crowe’s entire story, which sets up its scenario (and outcome) in simplistic and obvious A-to-B terms that negate any sense of surprise, momentum, or energy—a problem also fostered by Benjamin himself, who’s been conceived with a veritable halo around his head, always intent on doing the right thing and so sure of himself (despite perfunctorily voiced doubts to the contrary) that his triumph feels preordained from the outset. Even when Crowe addresses Benjamin and Dylan’s fractured rapport, which comes to a head in a showy, screamy airing of pent-up emotions built for award show clips, the film’s melodramatic mechanisms are visible, turning the entire proceedings transparent and forced.

“The secret to talking is listening,” is Kelly’s advice to Dylan about how to woo girls, but listening to the truisms of We Bought a Zoo incites only eye-rolling, be it with regard to Benjamin learning to speak to the animals, or understanding—via his bond with a dying tiger—how to let go of loved ones by embracing their memories, which here involves flipping through an iPhoto album and watching his dead wife come to imaginary, dancing life around him. Aside from a canny use of Temple of the Dog’s “Hunger Strike” and Duncan quipping that his experience driving in a car with 200 pounds of haddock was “like Altered States,” the action is virtually without nuance or humor, and while Damon and Ford are fine as far as their two-dimensional roles go, Crowe abandons his actresses in one-note purgatory, so that Johansson and Fanning are asked only to smile winningly or periodically act upset, and Jones is used as a cherubic prop for cutie-pie heartstring-tugging. Far more concerned with pratfalling animal shenanigans and unearned uplift than crafting a single complex or amusing moment, it’s a film caged in by formulaic plotting and plentiful pap.