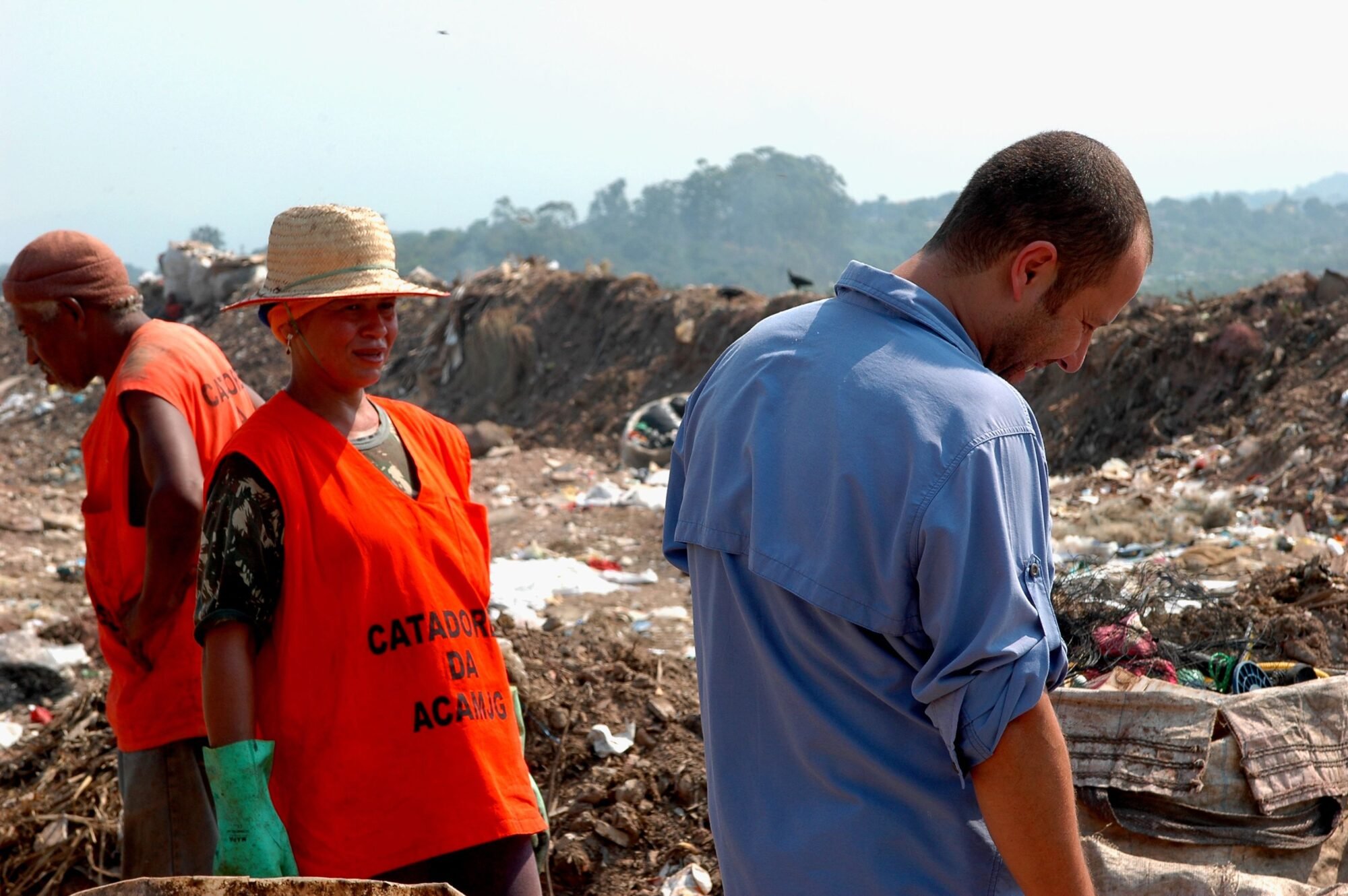 The cunning, if occasionally snotty, exhibition of quotidian refuse in posh, pomo museums is nothing new; the acceleration of human waste that coincided with globalization imposed a Malthusian eco-outlook among many intellectuals, one that appropriative artists such as Tara Donovan continue to exploit with Styrofoam irony. A full decade into the 21st century, however, it’s still rare to see an elite nation sleeping where it shits—a truth that, for example, WALL-E triumphed and its filmmakers later denied. We’re aware enough that what we throw away goes…somewhere…and that it’s occasionally resurrected to haunt us either in the form of downtown avant-garde installments or domestic pile-up during civil-servant strikes, but we pay taxes to protect us from the putrid, drippy oceans we’ve tossed aside. And, perhaps because of this, found trash art often wallows in political clumsiness. As filthy as the pieces get (and some, like sculptures made of Dixie cups, look nothing like garbage), they fail to make the reality of our waste overwhelming enough to inspire backyard mulching.

The documentary Waste Land, however, teems with bottle caps, soiled paper, coffee grounds, magnetic tape, and other bits of unwanted degradables that have congealed into an oleaginous monolith. Starting first with the work of Brazilian Vik Muniz, whose visual art poetically incorporates “everyday objects,” the film then travels to an empire of a landfill outside Rio de Janeiro called Jardim Gramacho, where Muniz collaborates with a community of recyclable-sorting trash dwellers on large-scale waste mosaics. Director Lucy Walker’s journalistic approach throughout is sterilely straight-forward (only a few, lysergic shots of evening trash fires match the earthy exhilaration of the folk-art pieces being constructed), but the no-nonsense cataloguing of indigenous faces and oral histories amounts to a compassionate sacrifice of form for naked, grassroots empowerment. Like Muniz, who graciously steps aside from the film’s timeline almost entirely during its extended second-act tour of Jardim Gramacho, Waste Land’s narrative seems to successfully surrender authorship to its campesino subjects, suggesting to us that the only way to properly get to the bottom of the world’s trash problem is to wade in it, waist-deep, with the people who have been doing so for decades.

“You get used to the smell,” says one recyclable-“picker” (as they’ve dubbed themselves) while we peer out over Jardim Gramacho’s mountainous garbage geography, and it reminds us of cinema’s limitations as a document of offensive stimuli. Despite the irksome textures on display every time a tractor unloads a bundle of shredding, oily bags, the film can’t quite envelope us in the acute sensation of the landfill. Instead, it smartly posits the location as a metaphor for social waste and decay, since toiling in the garbage is, for many Brazilians, a sensible if not too much more preferable alternative to prostitution and poverty. And while some of the likeably perfunctory testimony veers out of the pickers’ fascinating focus (a story about discovering a rotting child-corpse provides an unnecessary tangent on the “disposability” of human life), most of the talking heads ponder their untouchable social status with movingly blunt honesty. Irma, the community cook, discusses rummaging through grocery scraps for untainted meat; a young woman, Suelem, protects her two children in São Paulo from their druglord father with landfill wages.

The film’s third act, which concentrates on the massive trash murals made by Muniz and the pickers, isn’t quite as emotionally effective, primarily because the gargantuan portraits don’t rival the technique of Muniz’s earlier pieces or the storytelling sharpness managed by Jadim Gramacho’s inhabitants. Still, however, we’re fascinated by the opportunity for fantasy fulfillment these lower classmen have received (each piece depicts a picker decked out with religious or political symbolism); when Tiao, the recycling mastermind behind many of the landfill’s environmental efforts, is unflinchingly portrayed via David’s bathtub Marat pose, it’s a gleeful tribute to the fact that egotism knows no economic strata. And when Muniz, who returns to center stage to provide the final narration, casually deconstructs the envy between the haves and the have-nots, it’s a philosophical indulgence we feel he’s earned in his three years among the stench-ridden backside of his homeland’s capital. Although ultimately Waste Land is unlikely to succeed as an environmental call-to-action, it recognizes the collective (middle-class) narrow-mindedness that must first be penetrated before any such global commands can be followed; rather than issuing a warning blow to either our guts or our hearts, it’s something of a soft wakeup nudge aimed somewhere in-between.

Why Does Justin Timberlake Have an Erection?: The Social Network Meta Review