I bring my VIFF 2010 Dragons and Tigers coverage to a close with short takes on a few films. One of Vancouver’s great services is to bring attention to young filmmakers and interesting films before they have been “discovered” by the film festival establishment at large, those major festival that put the stamp of acceptance on the films that will be the subject of discussion in critical circles for the next year. The Dragons and Tigers selection is filled with World Premieres, International Premieres and North American Premieres. Not that all of them are great or even good (I have yet to find anyone besides programmer Shelly Kraicer who found anything of interest in Crossing the Mountain from China, a film that feels more like a structuralist graduate student assignment than a movie) but exposure to ideas and images and narrative concerns is still a worthy goal of festival attendance. And it sure beats seeing yet another derivative shot-on-DV American indie repeating the same clichés that have become codified in the last couple of decades.

Thomas Mao (Zhu Wen, China), for instance, which made its International Premiere at VIFF, isn’t conventional by any means. A deft little two-hander of a culture clash comedy with two characters who literally do not speak the same language (which results in parallel monologues that pretend to be conversations), the comedy of manners and miscommunications with a German artist (Thomas Rohdewald) who stays at the isolated, dilapidated country inn of a farmer (Mao Yan) who hasn’t cleared the rooms of his livestock is a minimalist piece with a sensibility reminiscent of Jim Jarmusch. Zhu tosses in odd digressions with the ghosts of Chinese wuxia pian taking over in an odd martial arts ballet of floating combat and flying limbs but saves his biggest narrative detour for the coda. In real life, Thomas Rohdewald and Mao Yan are both artists and longtime friends and the final minutes send us into Mao’s studio for a new perspective in this cross-culture relationship. Cosmic slapstick eases into the easy banter of colleagues who, it turns out, speak the same language after all: the language of art and creation and collaboration. It’s all a canvas.

Winter Vacation (Li Hongqi, China), making its North American premiere, is even more deadpan and, in its own way, absurd. School buddies kill time in the final days of their winter break in a stultifyingly dull mining town (the dynamite blasts echoing deep in the background of the soundtrack is the only reminder of the local industry that awaits them should they fail to escape through education). The ostensible leader of this crew sleeps his days away while his little brother exhibits the only ambition on display, even if that ambition is simply to escape the dull resignation of everyone in this town. This is a portrait of passivity at its nadir, an absurdist take on “Whaddya wanna do tonight, Marty?” with the youth of central China as the hopeless of the future. It’s scorchingly funny, a hysterical satire of social conformity in stasis directed at a snail’s pace, observing the cycles of meaningless rituals to their inevitable ends like it’s a slapstick act under a microscope (VIFF programmer Mark Peranson liked to call it “South Park in slow motion,” which is as expressive a description as any). As a piece of social satire it is corrosively subversive. The characters sleepwalk through their lives and parrot their lessons in Chinese socialism and meeting the ideals of duty to the state with the same conviction of purpose they apply to waiting for their alpha slug leader to rouse from sleep. As their teacher writes (in English) “How to be a useful person for society?” on the chalkboard, they blankly, dumbly stare ahead, not saying a word or responding, simply waiting to memorize the next lesson: another way to kill time in an existence they haven’t the imagination to consider as way out of.

Pinoy Sunday (Ho Wi Ding, Taiwan) is a much warmer comedy, this one of Filipino immigrant workers in Taiwan, far from home and family. They have imagined a way out of their world, but this one costs: loneliness, alienation, poverty. They work six days a week and have to check into their barracks-like dormitory by curfew every night, at the risk is losing their job and getting deported back. They don’t dream big. Dado (Bayani Agbayani) simply wants to make enough to get back home to his wife and child (he has a mistress in Taiwan, but everything in their body language suggests an affair of companionship forged of loneliness rather than lust) while the persistent Manuel (Epy Quizon) imagines himself a ladies man, much to the annoyance of the latest target of his charm. So when a red leather couch is abandoned in front of them, Manuel sees it as a sign from God and coaxes Dado to help him lug it across town to their dorm, where it will become the touch that makes it home. If they can make it before curfew, that is. Or make it all, for that matter. Heaving a couch across a major urban city isn’t exactly a cakewalk, even with a little help. The feature debut of director Ho Wi Ding is a simple film with a simple charm that makes this sudden embrace of this couch, the most important thing in the world to Manuel on this Pinoy Sunday, believable, if only as a distraction from his disappointments. They are, if not exactly outcasts, certainly men with no investment in a future here and that impermanence gives them so little to hold on to that for a while at least, the dreams of spending their down time on an elegant piece of furniture fills them with a sense of wealth. Imaginary or not, it’s a feeling these guest workers aren’t otherwise getting from their workaday routine and second-class status, and for a while it even displaces their longing for home with a mission.

Seven Days in Heaven (Wang Yu-lin and Essay Lui, Taiwan) refers to the seven days of mourning in a traditional Taoist funeral ceremony. The meandering comedy (in its North American premiere) takes an askew look at the funeral business through a Taoist priest who, with his girlfriend (a professional funeral mourner), has made funerals his trade. He takes a personal interest when an old flame returns to bury her deceased father. He guides her family through the rituals (religious and practical) of the formal funeral and shows her young cousin the backstage workings of the business, which in this world is just another family trade. The dryly funny film opens on what appears to be a dance in the Chinese Opera style, until you realize the song is “Hava Nagila” and the priest (dressed in the finery of his formal costume) moves like a Mandarin Tony Manero: Saturday Night Funeral Fever. The gag-like snaps of the opening scenes ease into a more matter-of-fact presentation of the funeral rites as a comic endurance contest and meanders through the lives of characters as they pry the funeral into their own business life (everyone here is hustling for a living, and those that aren’t are looking for the right hustle), but between the comic detours and jumping through the hoops of the mourning rituals is a recognition of the process as way to cope with the emotional stress and come to terms with the loss.

This article was originally published in the Parallax View and cross-published on the House Next Door. 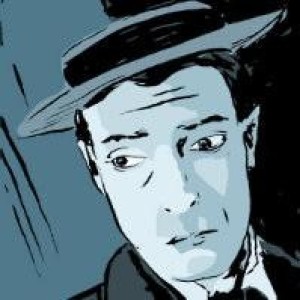 Falling in Love at PornFilmFestival Berlin