In Jonathan Parker’s (Untitled), Adrian (Adam Goldberg) is a composer who puts on performance pieces that include kicking a bucket containing a chain and a shrieking saxophonist. His brother Josh (Eion Bailey), on the other hand, creates commercially viable paintings, while Madeleine (Marley Shelton) is a gallery owner (who both brothers have a thing for) specializing in the rejects of the art world. The film serves as a middling rumination on the state of the avant-garde and the deep wish of everyone, from the commercial to the fringe, to find some sort of affirmation.

In her critique of La Notte, Pauline Kael found fault with Marcello Mastroianni’s character. She argued that there was nothing about his performance that revealed him to be a writer. Writers always evaluate their surroundings, they are the mirrors and sponges of society; but Mastroianni just floats on the periphery of existence. Kael claimed that if his character had been scripted as an architect or a hairdresser he wouldn’t have behaved any differently. Just as Mastroianni made for a dubious writer, there is nothing about Paul that would make you think or believe that he is an artist.

For a film that explores the realms of the avant-garde, or anti-art, it is drudgingly conventional in narrative and structure. This is a great opportunity missed. How wonderful would it be for a film questioning non-standard art work to have been infused with some fourth wall breaking, or some Godardian zest? Then, at the very least, the film could have worked out a statement on itself. No cigar. Aside from the constantly repeated observation that the 21st century (just like any another century really) is struggling to shape itself, the film—just like its queasily self-absorbed characters—has no true insight into the state of the avant-garde, or artists.

Artists, of the conventional and outré variety, must be acutely attuned to the world. And the good ones need to have the rhythm of their art flowing through their veins, humming, thriving, compelling them to express, to create. And even if that creation may not mean much to populist society, at least it means something to the artist. All you get from Paul is some vague sense that he creates because, um, he’s an artist, you know? And just like those who cry about how no one understands them while secretly finding gratification in self-pity, he too seems to get a certain kick out of being utterly incomprehensible to everyone while also espousing that his work—as with other Great Artists—will be accepted given the remove of time. None of this adds up to an interesting protagonist, and none of the other artistically-endowed characters are even remotely believable as actual artists.

Not one of the characters has the capacity to see a breath outside of themselves; Paul clutches onto his cacophonous music while flatly rejecting another artist’s non-conventional work. Though the episodes surrounding the ever-increasingly fringe art being displayed at the gallery are mildly humorous at best, they’re more often repetitive and dull. So you’re stuck watching a film about self-serious people who have not the slightest capability for self-reflection. And although I can’t remember the last time I sincerely set out to make art (so I’m not one to talk), I wholeheartedly believe that, to be a good artist, it is imperative to reflect, to be aware of oneself and of the world, otherwise your work is resoundingly hollow. 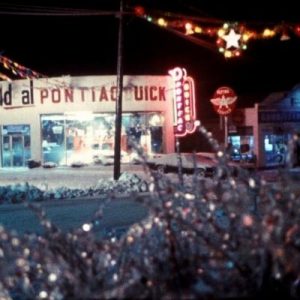 Veronica Ferdman's writing has appeared in Not Coming to a Theater Near You, In Review Online, MUBI Notebook, and other publications.

Review: The Hand of Fatima