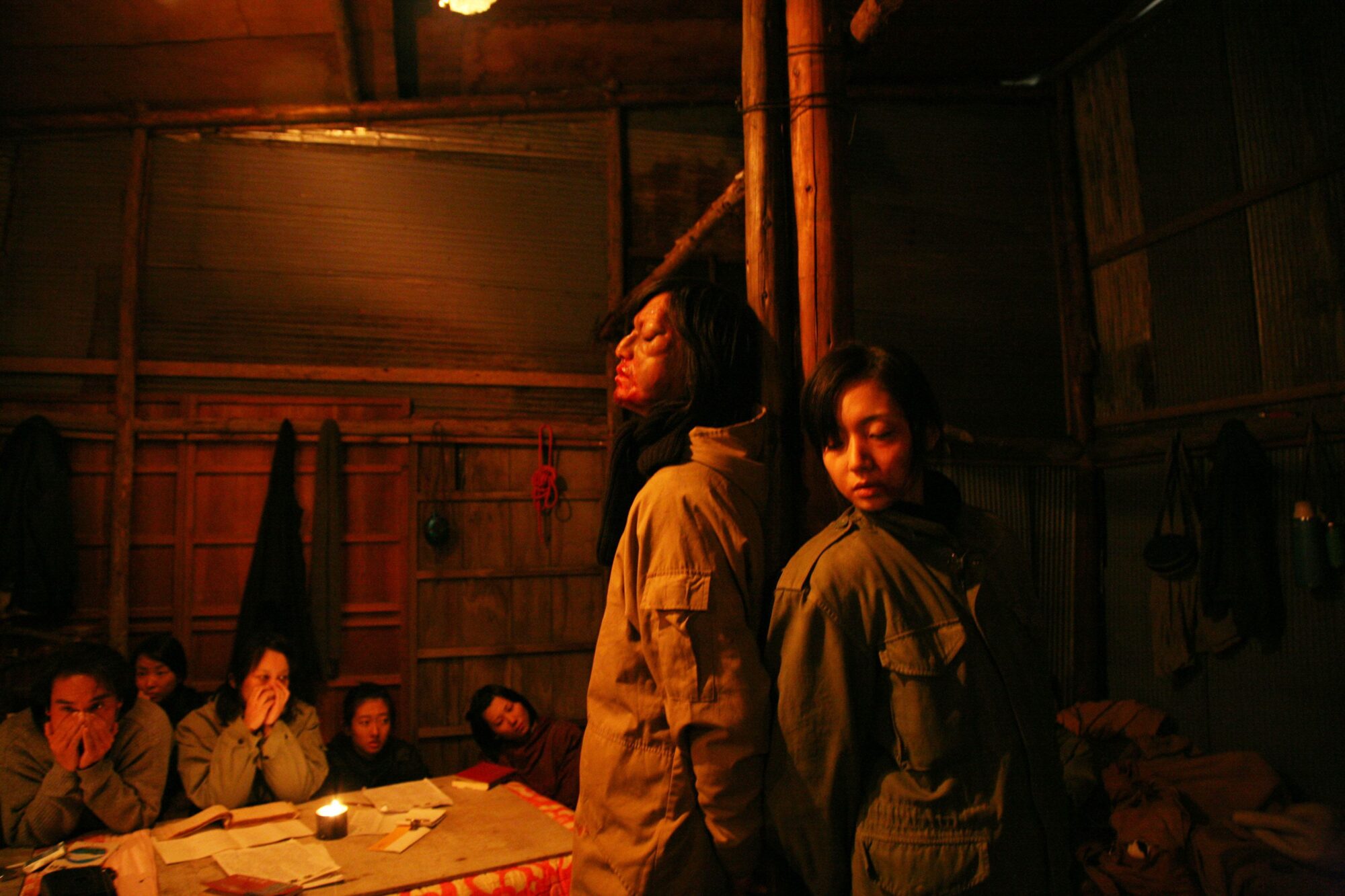 In United Red Army, Kôji Wakamatsu imagines Japan’s radical, would-be revolutionary left by turns as a purge-happy, Stalin-like cult of power; a pathetic force under siege, clinging desperately to ideology and rifles; and a group whose historical legacy can be reduced to an accumulation of data, an endless series of dates and numbers representing the continual cycle of activist/terrorist action and brutal police repression. Self-criticism is the watchword in the Japanese veteran’s ambitious movie and, although the term takes on bitterly ironic connotations in the film’s hour-plus-long centerpiece, Wakamatsu’s project finds the director, a one-time supporter of the Japanese student radicals of the 1960s and ‘70s, turning a considerably jaundiced eye on their activity through the lens of elapsed time and far too much history.

There’s little doubt of the correctness of the students’ cause and the impropriety of police suppression of even peaceful demonstrations, as the film’s masterful first 45 minutes makes clear; Wakamatsu’s qualms are with the revolutionaries’ methods and lack of direction. Opening with the seemingly paradoxical claim that “the events in this film are all true—but some fiction has been incorporated,” United Red Army gives way to a fast-paced collage of the student movement’s activities from 1960-1972, skillfully mixing archival footage, on-screen titles, and recreated scenes to craft a frenetic, condensed history lesson. Following the movement from early university protests over tuition hikes, to more engaged dissent over the U.S.-Japan security treaty and Japan’s complicity in the Vietnam War, to the formation of would-be radical-activist cells, this early sequence sustains a fever pace of facts and characters that the viewer can’t possibly be expected to process in their entirety. Shooting the fictional footage with the same crude off-the-cuff style as the newsreels and filling the screen with relentless expository titles, the opening sequence offers information overload while simultaneously stinting on the action: Early missions by the nascent Red Army Faction (RAF) are barely glimpsed while police brutality registers primarily as a series of numbers (arrests, killings) popping up on the screen.

The wide-ranging, decentralized approach to narrative and character of the film’s first section gives way to the single (or dual) hothouse setting of the protracted centerpiece, an increasingly brutal demonstration of how youthful ideals devolve into fear and power-mongering. Set in two mountain retreats operated by the RAF and the Revolutionary Left Wing (RLF) who together comprised the United Red Army, this section is bathed in a dull, digital murk as crude and ugly as the group’s muddled ideology. If the opening segment is a rapidly paced, fact-oriented freak-out then the lengthy middle section is claustrophobic, repetitive, and by turns tragic and absurdly comic.

Determined that “self-criticism” is the only way to a revolutionary consciousness, group leader Tsuneo Mori (Go Jibiki) and his right-hand woman Hiroko Nagata (Akie Maniki) use this doctrine to force members of the cell to confess their shortcomings and then have other members of the group beat them to death. At first the murders seem tied to genuine weaknesses, as the first three victims were responsible for the failure of a recent revolutionary raid. But soon declaring in no uncertain terms that “leadership means beating,” Mori turns to handing out direct death sentences to whomever he pleases, dispensing with any claims to instilling communist consciousness.

The purge sequence is both utterly rigorous and relentlessly exhausting to the point of absurdity as the same pattern of forced confession/murder is repeated a good dozen times with only slight repetition. There’s a dark, sustaining undercut of humor in Mori’s endless demands for self-criticism, but little indication of motive except a love of power and, possibly, a need to displace responsibility for failure onto others. Nagata, on the other hand, with her close-cropped hair and her face a massed ball of hatred, seems to take delight in singling out female members who are prettier than she is and making them destroy their own looks before killing them. At any rate, these scenes unfold according to a meticulous logic that can’t be denied, even as it’s unclear exactly what this endless repetition adds to our understanding of the viciousness of Stalin-like assertions of power.

The film’s final lengthy segment, covering the famed Asama Sanso Mountain Lodge siege during which five escaped group members holed up in a rural retreat for days while police surrounded the area, is both more conventionally graspable and a bit anticlimactic after the excesses of the second sequence. Clinging to an ingrained ideology, one they may or may not even believe in anymore, the quintet takes a single hostage, who they treat with touching deference, while shooting it out with the police. Although he fills out the sequence with questionable sentiment (repeated images of the dead, whose memory haunts the survivors, bring into play the question of the men’s culpability), Wakamatsu once again withholds the pleasures of violent action, obscuring much of the details of the final shootout with water from police sprays and smoke from rifles and bombs so that we get only glimpses of the battle. As a final sign of comic futility, the men watch the hated Nixon and Kissinger on TV, meeting with their beloved Mao, signaling, as one of the students’ mothers puts it via loudspeaker, the beginning of “a new age” in which the student radicals’ conception of the world no longer quite fits.

But fight it out they must, for the desperate men are out of options and unwilling to accept the ultimate futility of their efforts. The Lodge incident proved to be the last gasp for the United Red Army, but as a coda makes clear, it was hardly the end of Japanese left activity. Returning to the endless deluge of information that opened the film, Wakamatsu updates the chronicle of revolutionary action through the present, detailing the 30 years of violent activity perpetrated by the United’s successor, the Japanese Red Army. History, a tangled mass of facts and figures, marches inexorably on, but when looked at closely, Wakamatsu suggests, its players are either hapless dupes or murderous autocrats. Every bit as brutal and authoritarian as the militant right the director would expose in his 2010 film Caterpillar, the radical left may have begun with finer, even downright noble, intentions, but they fell happily into the same cycles of unproductive violence. Through his inconsistent, but fascinating film, Wakamatsu’s achievement is to show us how that violence can turn as easily inward as it does out, destroying its own members as surely as any imperialist oppressor.