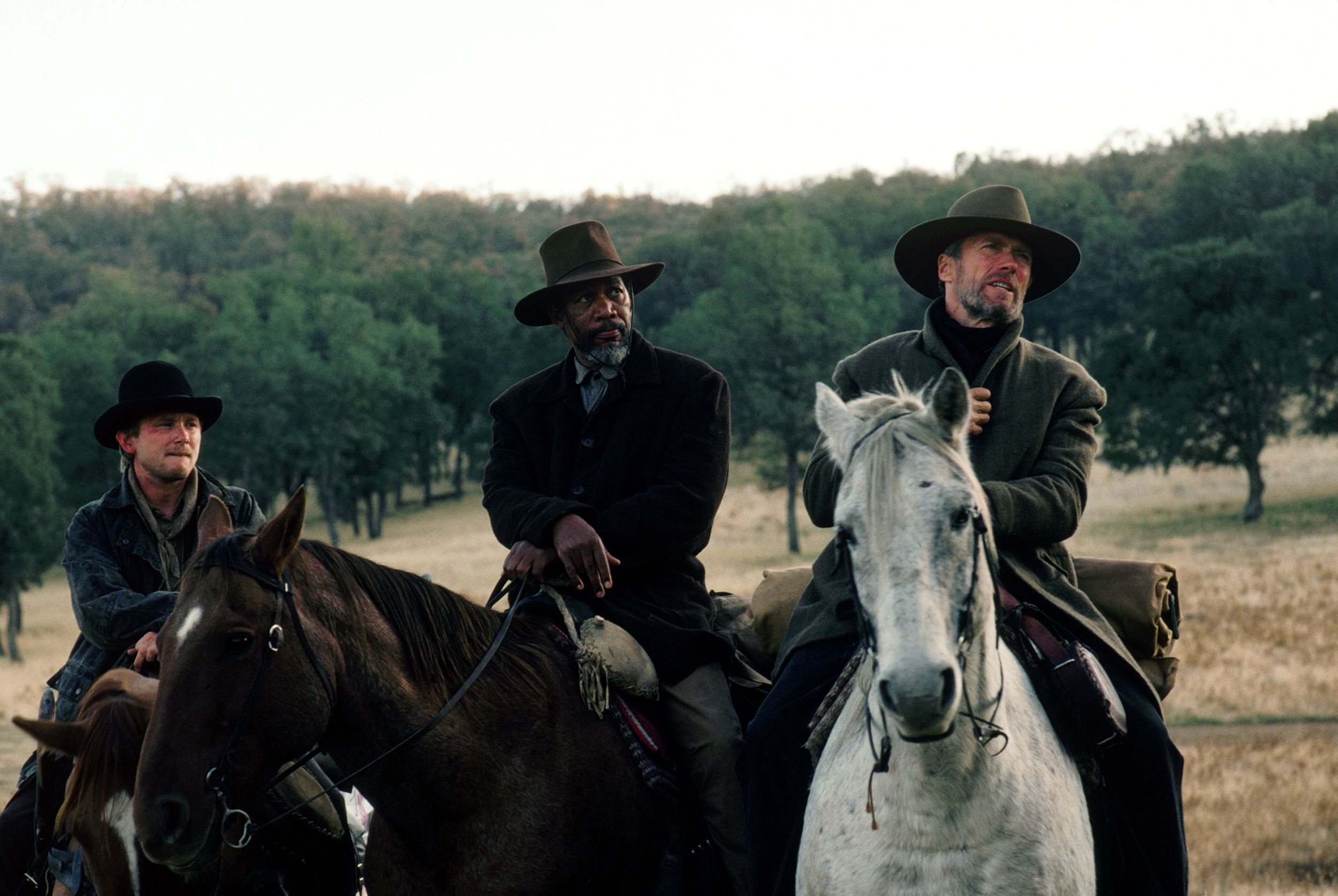 Mythologies haunt Clint Eastwood’s Unforgiven. Set primarily in 1880 and 1881 along a trail between Wyoming and Kansas, the elder characters of the film talk of their violent pasts while younger men eagerly listen, waiting to prove themselves. David Webb Peoples’s screenplay resembles a series of nesting one-scene plays, a few of which end in moments of violence that shatter the younger generation’s illusions of the masculine grandeur of killing. At times, Eastwood goes out of his way to emphasize the pitiful and demoralizing chaos of murder, particularly when one of the film’s villains is shot to death in an outhouse, his eyes alive with unforgettable terror. This man’s killer, who calls himself the Schofield Kid (Jaimz Woolvett), later drinks a bottle of whiskey in tears, his comic braggadocio crumbling into remorse.

Twenty-five years after Unforgiven’s initial release, it’s still distinctive to watch an American revenge film in which violence is accorded this sort of awful and surreal weight. Looking to the notorious William Munny (Eastwood) for comfort after his initiation into murder, the Schofield Kid says that the killing doesn’t feel real, evincing a poetically human response to atrocity that’s unusual for genre cinema. Eastwood and Peoples often juxtapose legendary killers, the protagonists and primary antagonists of the film, with outsiders, supporting characters such as the Schofield Kid and the writer W.W. Beauchamp (Saul Rubinek), who blithely echo our own distanced and worshipful embrace of violence in pop art, as a transmitted energy that’s divorced of the ramifications of the destruction it simulates.

One of Unforgiven’s most startling scenes, however, centers on violence that doesn’t occur. Holed up in jail with the killer English Bob (Richard Harris), Beauchamp discusses the practicalities of barroom gunfights with Little Bill Daggett (Gene Hackman), the brutal sheriff of Big Whiskey, Wyoming. An enforcer with real experience, Little Bill knows violence in a way that’s impossible for Beauchamp, English Bob’s naïve and pampered groupie. Beauchamp and Little Bill talk of the visceral experience of killing someone, and Bill, drunk on his own pomposity, hands the nervous Beauchamp a pistol, inviting the writer to shoot him and escape the jail with English Bob. Quaking, Beauchamp can’t even bring himself to touch the trigger. Eastwood and Rubinek remarkably allow one to feel the weight of that pistol in Beauchamp’s hands, which suggests how an inexperienced person might marvel at the cold, heavy tactility of a firearm. The sense of social destabilization that’s provoked by the mere sight of a gun has rarely been so vividly dramatized in cinema.

There are no conventional heroes in Unforgiven, only people killing for money and reputation, some of whom kid themselves into believing that their actions have something to do with sympathy for Delilah (Anna Thomson), a prostitute whose face was brutally sliced up by a drunken cowboy after she laughed at his cock. The cowboy and his accomplice are let off with a slap on the wrist by Little Bill, who severely punishes outsiders for smaller trespasses that threaten his control over Big Whiskey and implicitly insult his patriarchal condescension of the town’s brothel, which has, in turn, put a bounty on the heads of Delilah’s assailants. In other words, a traditional western scenario has been flipped inside-out: We’re primed to root for interloping outlaws to sack a sheriff, and this reversal, along with the tenderness that Eastwood evinces for the prostitutes, casually indicts the sexism and classism of America and its classically homegrown genre.

This social consciousness, though, is further complicated by Unforgiven’s strange and distracting refusal to racially distinguish Ned Logan (Morgan Freeman), seemingly the only black man in the American West a little over 10 years after the Civil War, from the film’s white men. Eastwood’s omission of considerations of race, even as Ned is tortured by a white mob for information on Munny and the Schofield Kid, contrasts unfavorably with George Romero’s pointedly color-blind casting in Night of the Living Dead, which detonated the “harmless” black male stereotype that populated American cinema at the time—though English Bob’s exploitation of the Chinese slaves building the railroads is accorded multiple and increasingly disturbing acknowledgements.

Of course, Unforgiven is most occupied with the weight of Eastwood’s own legacy playing invincible men who kill with a smirk that relieves the audience of having to take the violence seriously. As both actor and director, Eastwood clearly enjoys the scenes in which Munny can’t shoot straight or mount a horse with dignity. These are the sort of faux-humble moments at which any durable icon excels, though Eastwood was able to get by for a surprisingly long time—30 years—without having to court the audience’s sympathy. This film is Eastwood’s act of pretending to give himself a gold retirement watch, then, as preparation for the next leg of his career.

Munny’s vulnerability also represents the mythological laundering that the film critiques. The truth of most “revisionist” westerns is that they bolster social and aesthetic status quos, adding a self-conscious varnish of ambiguity to sweeten the package for self-aware viewers—i.e., cinephiles, art students, and liberal critics. Unforgiven is no exception, and Eastwood’s fetishizing of Munny’s age and superficial incompetency, despite the filmmaker’s own obvious and astonishing virility, is a trick to soften the weight of Munny’s killing of Little Bill and several bystanders at the film’s dark, stormy climax.

The masterfully staged shoot-out, memorable for its biblically portentous slowness, with actors moving through the darkness-pocked frames as if underwater, epitomizes Eastwood and Peoples’s dueling intentions. The sequence is ugly and agonizing, culminating in a daring plea for sympathy for Little Bill, a misogynist who uses his power to keep his friends outside of jail while abused women desperately yearn for justice. On the other hand, for a film so obsessed with the sanitizing of mythology, it gives us exactly what we want: Eastwood riding high, unkillable, killing all. A film truly interested in detonating mythology might’ve had Little Bill unceremoniously blowing Munny away as soon as he entered the doorway of the bar.

Unforgiven brought the revisionist revenge film into the 1990s and, by extension, the 21st century, ushering forth action narratives that feigned outrage at the violence they were nevertheless selling as an all-inclusive package designed to please all parties. This film also minted Eastwood as an auteur beyond repute, which may be irritating to his acolytes, as there are plenty of productions that paved the way for Unforgiven, though many critics wouldn’t deign to take them seriously. There’s The Outlaw Josey Wales, Pale Rider, and particularly High Plains Drifter, which is uglier and far less sentimental than Unforgiven, offering a spectral Eastwood character who’s a legitimately unrepentant sociopath. (Not to mention the bold formal and structural experimentation of Bird, Eastwood’s biography of Charlie Parker.)

Unforgiven’s portrait of white male entitlement that’s questioned yet rewarded remains rich and haunting, especially as rendered by cinematographer Jack N. Green with a bare and melancholic sense of wide-open space that spins self-pity into a visual song of transcendentalism. The film’s hypocrisy only deepens its nightmarish resonance, as Eastwood’s empathy, tenderness, and self-absorption are inseparable and irreconcilable.