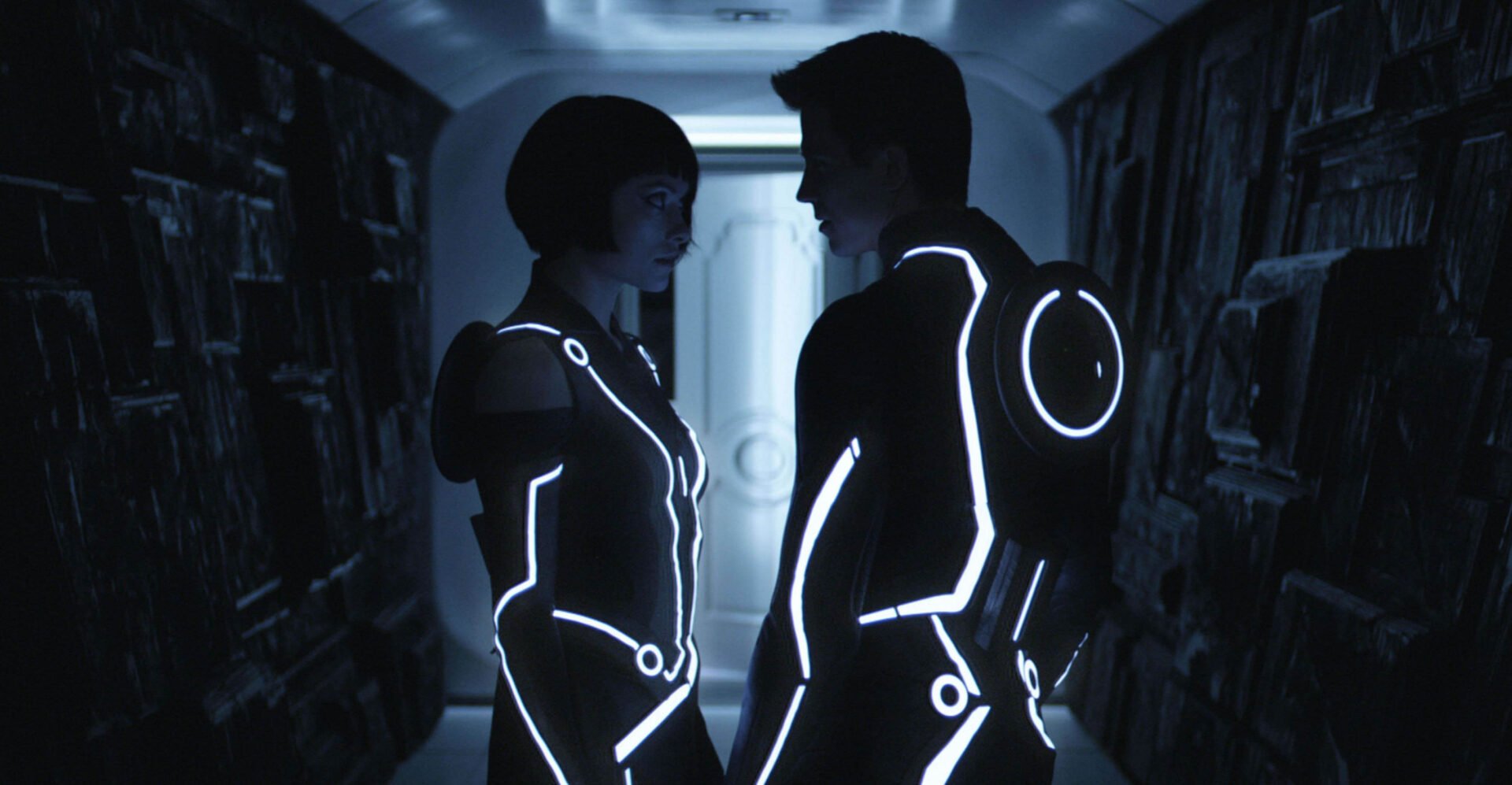 Evolution is the name of TRON: Legacy’s game, less via its cutting-edge CG than through its narrative and, fundamentally, its aim to reboot a nearly 30-year-old property. That last endeavor isn’t wholly successful, but as far as holiday-season spectaculars go, Joseph Kosinski’s would-be franchise restarter is, if nothing else, aesthetically striking, taking the basic design templates of Steven Lisberger’s cult classic and retrofitting them with such inventive pixilated verve that, at least for a time, nagging storytelling shortcomings are ignorable. The inter-computer world known as the Grid, which functions as the tale’s primary setting, is a thing of digitized wonder, a blacklit landscape drawn in RGB-colored neon lines that’s populated by towering skyscrapers, masked stormtroopers, and gargantuan robot transport ships. It’s a place whose dark, malevolent beauty is enhanced by Daft Punk’s pulsating electronic score and superb 3D effects that accentuate the multi-planed designs of inner sanctums, roadways, and the translucent battle arenas where combatants engage in deadly disc combat and light-cycle races. Staying true to the look and feel of its then-groundbreaking predecessor while updating and expanding it in imaginative ways, TRON: Legacy delivers an Orwellian virtual-reality fantasia that—visually speaking, and especially when blown up to 70-foot IMAX proportions—can be decidedly nerdgasmic.

However, to a similar, if somewhat lesser, extent than last year’s VR fairy tale Avatar, Kosinski’s film (the director’s feature debut, written by Edward Kitsis and Adam Horowitz) dazzles the eye far more than it stirs the mind or heart. Two decades after his father, computer genius and ENCOM founder Kevin Flynn (Jeff Bridges), mysteriously disappeared while on the cusp of achieving a supposed “miracle” regarding “digital frontiers,” his reckless-rebel-biker son Sam (Garrett Hedlund) revisits his dad’s old arcade at the behest of Flynn’s friend, Alan (Bruce Boxleitner), and is promptly laser-zapped into the Grid. In this neo-Oz, he discovers that Flynn’s digital doppelganger Clu (also Bridges), having been tasked with creating a utopia, has instead staged a coup and seized power, relegating the flesh-and-blood Flynn to a remote hideaway where, with gorgeous badass Quorra (Olivia Wilde), he bides his time meditating, waiting for Clu to be overthrown. It’s a plan Sam, who wants to return home with his beloved long-lost father, instinctively rejects, and soon he’s striving to get both his father and Quorra to a heavenly column-of-light portal where they can not only beam up to the real world, but, in the process, also prevent Clu from doing just that, along with an apocalyptic army bent on erasing all traces of imperfection.

Threads concerning evolutionary progress emerge from the subsequent race to freedom: the Grid proves a leap forward from its nascent 1982 incarnation; Quorra turns out to be an extraordinary new life form that holds the key to a future of unlimited potential; and Flynn realizes that he not only must reconcile himself with the development of the two sons (Sam and Clu) he abandoned, but that—via a battle-within more literal-minded than that found in Black Swan—his very conceptions of self and perfection require further advancement. A sequel eager to modernize its thrill-challenged forerunner, which remains a rusty relic of an embryonic computer age, TRON: Legacy cannily integrates notions of growth into its fiber, all while—as alluded to when Quorra confesses love for the tales of Jules Verne—embracing a standard sci-fi adventure-fiction spirit.

That doesn’t mean, however, that there’s much substance to the actual adventure at hand. Despite a few excellent set pieces that boast propulsive momentum and a sense of physical weight (including the opening disc and cycle skirmishes), Kosinski’s film is a routine chase saga drenched in nostalgia and primarily energized by the sleek sexiness of Quorra and the occasional Zen Master/surfer dude exclamation (“radical!”) from Bridges’s Flynn, whose fear and determination is too often drowned out by the surrounding settings, weaponry and vehicles which materialize out of thin air.

The most distracting of TRON: Legacy’s effects is that of Clu, who boasts the face of a 33-year-old Bridges and, whenever on screen, commands undue attention, begging to be scrutinized (for realism/phoniness) at the expense of all other ongoing concerns. Given that Clu is a digital “program” rather than a human “user,” his plasticine-strange looks make some sense within the premise’s framework. Yet Kosinski unwisely also uses this computerized young-Bridges face during earthly ‘80s flashbacks, which undercuts the film’s inherent divide between the real and the unreal, a sloppiness which extends—as in the original—to basic questions about the laws that govern the Grid, including why this PC universe features an apparent oxygenated atmosphere and how Flynn has managed to procure an organic dinner feast of roasted pig. Those illogicalities don’t wholly weigh down the proceedings, nor do the myriad moments that recall other sci-fi classics, from the Star Wars prequels (Sam in a black hooded robe; a synthetic militia) and Speed Racer (the video game-inspired vehicular madness) to Blade Runner (the Grid’s metropolitan architecture) and The Matrix (Michael Sheen, garishly preening as a nightclub owner-cum-underworld power player). But alongside a third-act that gets severely bogged down in monotonous action-mayhem, they do ultimately relegate this TRON reboot to a fleet, fantastic-looking bit of old code.

Review: The Chronicles of Narnia: The Voyage of the Dawn Treader