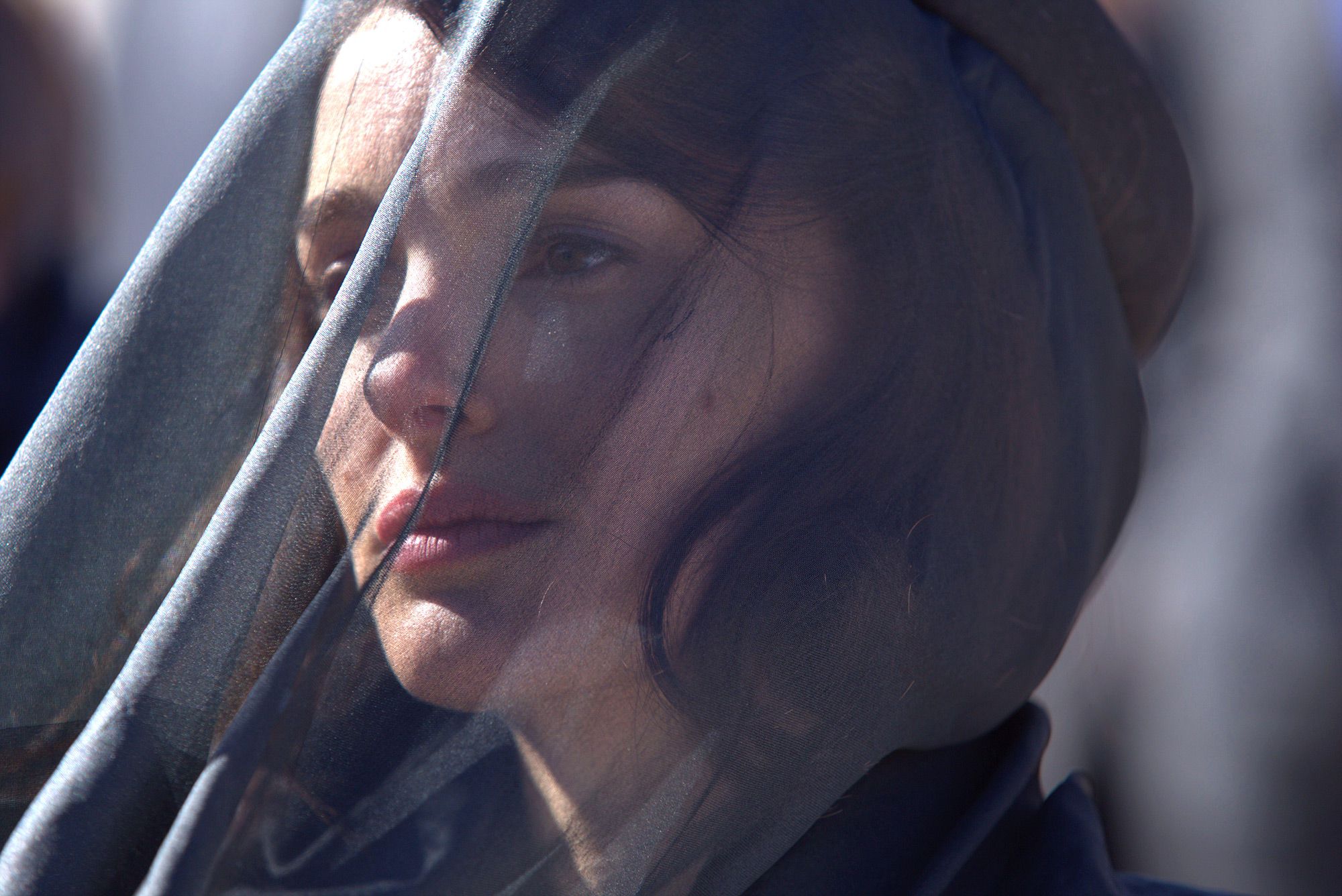 In Jackie, it doesn’t take long for Pablo Larraín to pull his first subversion of the biopic genre. Those familiar with Natalie Portman’s previous work as an actress will be startled to hear her vocal approximation of Jackie Kennedy’s distinctive speech patterns in the film’s opening moments. But when Jackie makes it clear to a visiting journalist (Billy Crudup, playing a version Theodore H. White, who profiled her in Life magazine a week after John F. Kennedy’s assassination) that she’ll be controlling this interview as much as possible, one quickly realizes that Larraín wants us to be aware of Portman’s performance as an act. The spectacle of a famous actress like Portman taking on one of the most iconic figures in American history becomes, under Larraín’s direction, just another level of performance, in a film concerned with elucidating levels of performance in public and private spheres.

Such a self-aware vision of one of the most famous first ladies in U.S. history is very much of a piece with Larraín’s prior films—especially No, his chronicle of an ad executive’s creation of a campaign to help bring down Augusto Pinochet’s regime in Chile. If that film was all about the selling of a political position, Jackie is about the selling of a presidential legacy. That, according to Larraín, was one of Jackie’s main obsessions in the aftermath of her husband’s assassination in 1963. But then, that PR-like role was one of her most prominent functions as first lady when John F. Kennedy was president of the United States, perhaps illustrated most directly by the 1962 television special in which she offered CBS News reporter Charles Collingwood a tour through a newly restored White House, a project she spearheaded.

For the most part, though, Jackie focuses its attention on Jackie Kennedy the week or so after the assassination. Thus, another major thread of the film centers on her concerns over how to approach her husband’s funeral arrangements, with much drama revolving around how private or public the ceremony should be. Though her advisers would prefer a low-key affair, Jackie sees this funeral as a way to potentially solidify her husband’s legacy; as a result, she eventually decides on a more public procession.

Even as Jackie agonizes over such matters, though, we see and hear her reflecting on the decision, wondering to an Irish Catholic priest (John Hurt) whether she marched in public more for herself than for her late husband. It’s that level of anguished reflection that suggests one of Jackie’s other noteworthy achievements: as a fascinatingly multilayered character study. As much as it’s an inquiry into the ways the political bleeds into the personal, Larraín’s film also aims to find the real Jackie underneath the fashionable surface and cunning calculation. To that end, cinematographer Stéphane Fontaine’s extreme close-ups, which occasionally push into Jackie’s face, become instruments of prodding, capturing Portman as she shifts between presenting Jackie’s real emotions and the way she reverts back to a carefully cultivated public persona seemingly on a dime.

All of this suggests a biopic with more of an academic bent than most. But perhaps Jackie’s most remarkable quality is its emotional vividness, with Larraín maintaining a hold on Jackie’s grief in the wake of her husband’s death. Two especially memorable sequences stand out in that regard: a scene right after the assassination in which we see Jackie tearfully clean herself up and crawl into bed, and another in which she wanders through the halls of the White House, the title number from the musical Camelot spinning on a record player and the camera tracking her as if she were hanging out inside the Overlook Hotel of Stanley Kubrick’s The Shining.

But Jackie as a whole is marked by Jackie’s trauma, with Mica Levi’s lushly mournful strings infusing the proceedings with a melancholy quality, and Sebastián Sepúlveda’s non-chronological editing weaving in and out of past and present in ways that suggest a mind dealing with trauma. Above all, though, there’s Portman bringing piercing vulnerability, steely resolve, and emotional mystery to an iconic figure, in a film that refuses to encase her in hagiographic amber even as it is recognizes her profoundly human sorrow.