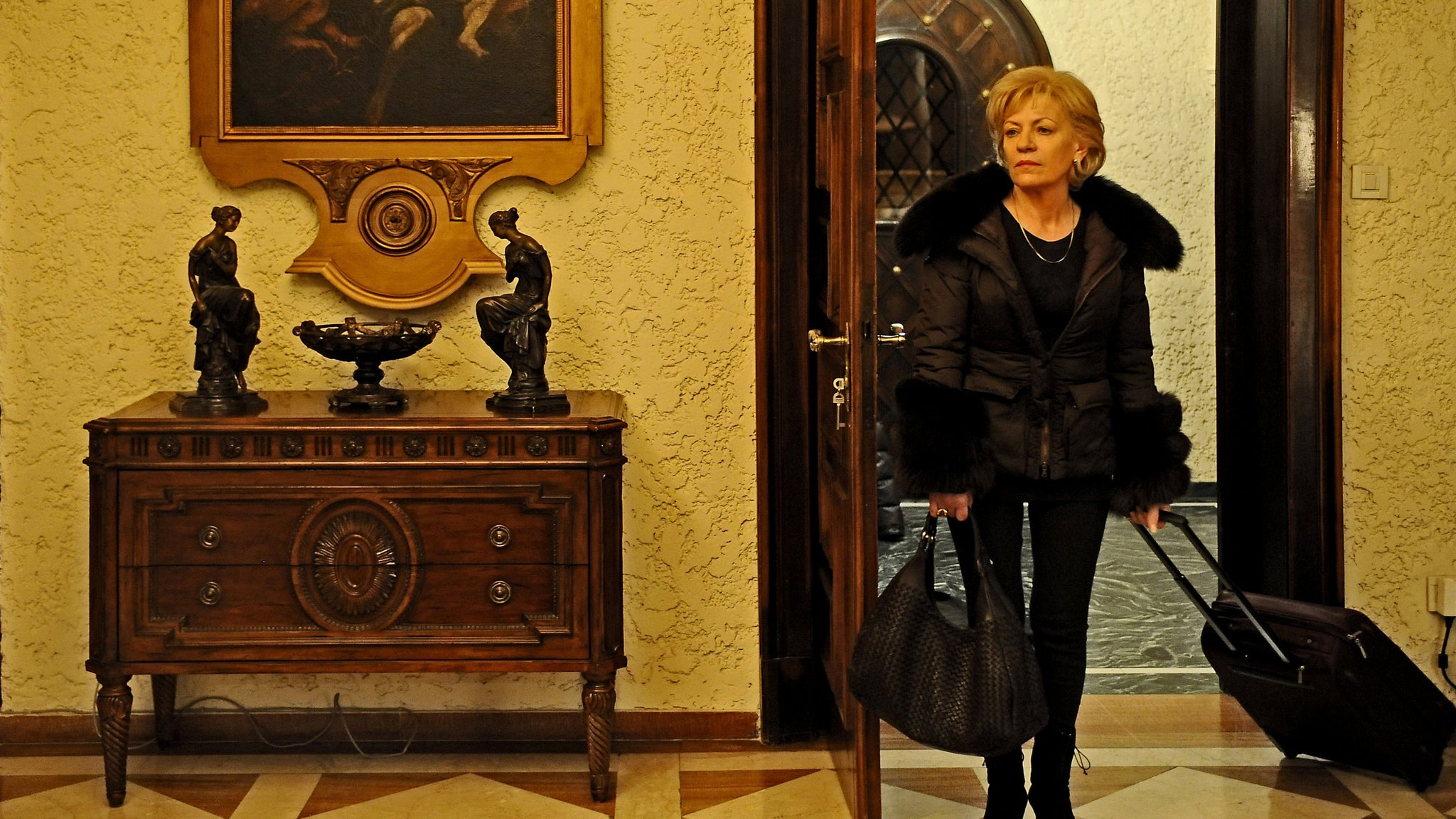 Given its late-seasonal timing and massive slate, the Toronto International Film Festival allows juried winners of past 2013 world festivals—such as Berlin, Locarno, and Cannes—the platform to play to new, salivating festivalgoers with a bit of reflection. Festival-award hindsight, however, isn’t always 20/20. Arriving in Toronto with Berlin’s Golden Bear in tow, Călin Peter Netzer’s raggedy Child’s Pose presents a bleak sociological view of Romania through the archetype of the overbearing, controlling matriarch.

When Cornelia (Luminița Gheorghiu) is pulled out of an opera, she’s informed that her only child, Barbu (Bogdan Dumitrache), who recently stated he needs to recede from his mother’s tight grasp, has been in a car accident; to her relief, he isn’t hurt, but he did run over and kill a 14-year-old boy. Selfishly concerned with only her son’s potential criminal charges, Cornelia storms into the police office, steaming with anxiety and under the pretense that she can use politics to get her son discharged. Within these opening moments, it’s fascinating to watch this woman attempt to take full advantage of a bureaucracy that favors the wealthy, educated, and well-connected. As a doctor administers a blood alcohol test on her son for the police report, Cornelia and her bullish sister watch with severe attention, like a tag team in expensive furs ready to pounce and protect their wounded cub.

These moments in the first act evoke notes of Asghar Farhadi’s brilliantly constructed A Separation (complete with hot-headed reactions from the lower-class parents of the dead teenager), and yet, despite a consistently jarring aesthetic, Child’s Pose pulls itself in multiple frustrating directions without fully developing a cohesive structure. After multiple scenes of Cornelia’s manipulative maneuvers and outright bribery, the narrative awkwardly morphs from strident socioeconomic treatise to Oedipal mother-son melodrama, hinting at revelations and setting up truth bombs that never explode, instead opting for a boisterously repetitious cycle of miscommunication and bullish behavior.

The characters have the worst poker faces, and Netzer overplays his hand, framing the family’s complete lack of awareness to condemn their selfishness. The film, more than the complicated milieu it depicts, is at odds with itself: The critique of well-to-do Romanian pettiness is harsh and, through Barbu’s explicit explanation of his mother’s power-grabbing impulses, the filmmaker’s judgment of Cornelia’s motivations becomes overstated. Despite the film’s detailed settings and shaky-cam realism, the exaggerated and simplistic characterizations—slightly grounded by sensible central performances—are more suited for the scope of a soap opera and undermine the film’s purported verisimilitude. As the film reaches its proscribed finale in Cornelia’s car, Barbu symbolically asks, “Mother, would you unlock me?” And, by the end, the audience may ask the same of the filmmakers.

In the Q&A for Locarno Golden Leopard winner Story of My Death, an impish and loose melding of the Casanova and Dracula mythos, Catalan writer-director Albert Serra explained that he doesn’t communicate or rehearse with his cast or crew while filming. For better or worse, it shows: Our freewheeling, surprisingly funny introduction to the story’s opulent world is followed by a sluggish, Transylvanian-inspired in-joke that even the cast—aside from Vicenç Altaió as an über-cheeky Casanova—doesn’t seem in on.

The first act, which observes Casanova in his home, is a casually subversive costume drama packed to the rafters with bon mots and signifiers of obscene decadence. Riffing on Casanova’s carnal and scatalogical obsessions, Serra affords Altaió the space to palpably convey Casanova’s voraciousness, whether it’s performing sexual acts, extolling philosophical virtues, downing booze, or seductively chomping on pomegranate seeds. This playful opening hour of debauchery, full of Enlightenment-inspired dialogue and signifiers of indulgence, is posited primarily as a rational setup for a trek to the Romantic countryside of darkness—both figuratively and literally.

However, this framing device, a sort of red wine-soaked reverie, works better than the sinister narrative it foreshadows—a halting, subjectivity-based hangover that hardly registers before it escapes from the mind. Serra’s brazen, batshit-crazy audacity—at one point, focusing on actual feces turning into glistening gold—is undeniable, yet his impish impulses are stretched thin as vampirism reigns supreme, leading to a pervading listlessness that drains Story of My Death of any blood and energy.

That RoboCop Trailer and the Folly of Paul Verhoeven Remakes