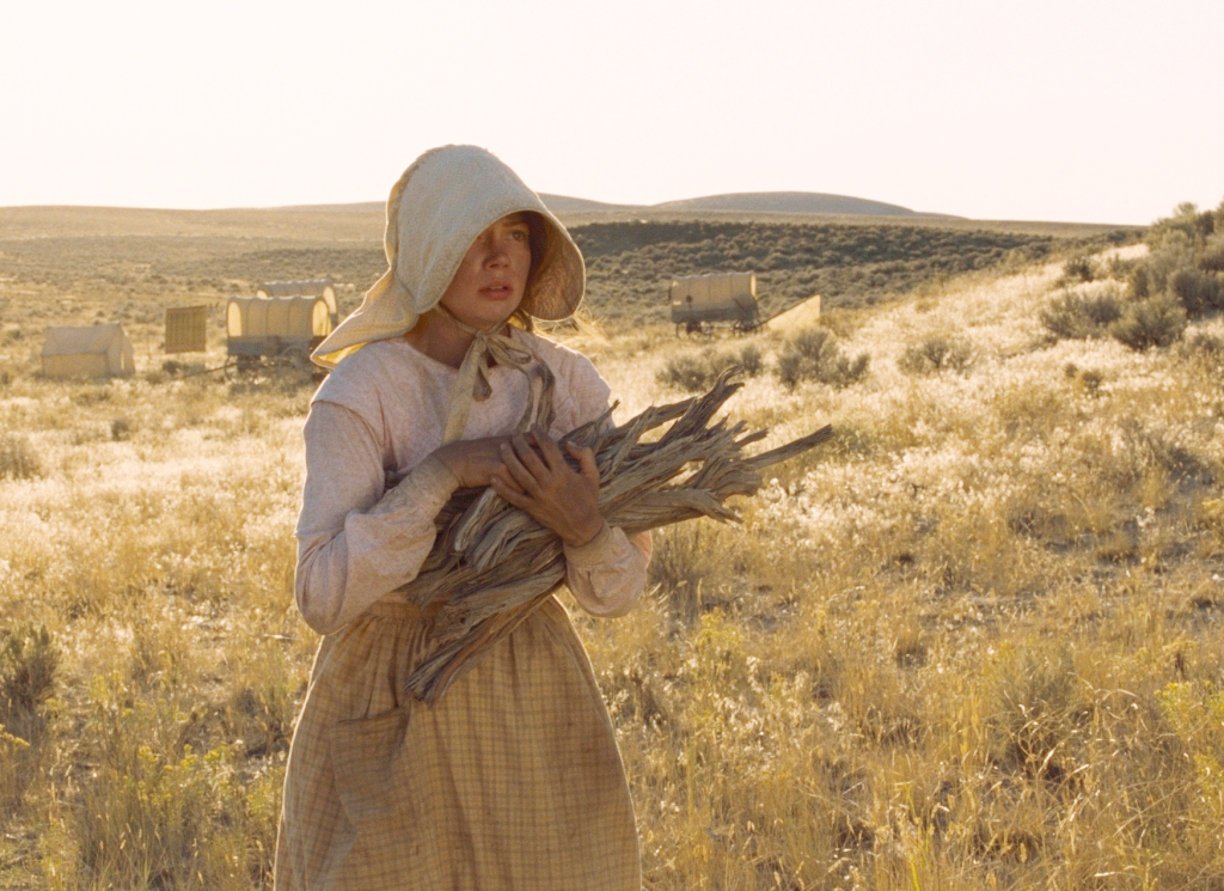 Meek’s Cutoff: In a festival crammed with terrains trudged, crossed, and variously endured, Kelly Reichardt’s wondrous 19th-century road movie had the most arresting use of landscapes. Full of parched diagonals and framed in a boxy, horizon-chopping Academy ratio, the Oregon vistas here are half Wyeth prairie, half lunar surface, and wholly the kind of transfixing American void into which the director’s outsiders lose themselves. Said outsiders are members of an ox wagon train circa 1845, three families who have lost their way from the Oregon Trail thanks to Meek (Bruce Greenwood), a blowhard trail guide who brags and misjudges like a combination of Buffalo Bill and Dick Cheney. “We’re not lost. We’re just finding our way,” he insists, though, as tensions rise in the group following the capture of an inscrutable Cayuse Indian (Rod Rondeaux), his machinations are increasingly challenged by the plain-spoken skepticism of Michelle Williams’s tough pioneer wife. The story of a fragile community stranded in the desert by a fear-mongering charlatan could have been settled for facile political allegory, yet Reichardt is after something more uncanny and mysterious. Filmed with a rapt severity worthy of Ermanno Olmi’s The Tree of the Wooden Clogs, hers is a horror-western where the minimalist subtly grows into the hallucinatory.

Promises Written in Water: Effectively muzzled in Essential Killing, Vincent Gallo’s high-pitched whine is back in full force for his latest effort to seize the title of cinema’s great, obnoxious total filmmaker from Jerry Lewis. The actor-director-writer-editor-composer-singer-caterer-etc. paces around, inhales one cigarette after another, massages his brow, scratches his stubble, checks the mirror, and eventually circles a newspaper ad for “apprentice funeral director.” Elsewhere, a gamine (Delphine Bafort) curls up in a bathtub. The death-scented creatures are first seen together in one of the film’s extended, belligerent chunks of melancholy abstraction, a diner date in which Gallo keeps repeating and altering the same bit of improv. Is he making a case against tidy dialogue in the face of emotion, or perhaps positing human yearning as a flow of fumbling outtakes? Maddening as he is, Gallo really is an auteur after the ineffable, asking: How do you film “Desire”? How do you film “Loss”? “I just find it difficult to talk about it,” says Bafort, moments before her nude body is explored by the camera in a sequence that’s suspended somewhere between close-up portraiture and medical exam. As ephemeral as its title, the film is risky, limpid, and with a Borzagean delicacy flashing from under its Warhol-Eustache-Garrel grain.

Kaboom: Strange is the new normal in Gregg Araki’s splashy, squishy screwball gem, which, more than Smiley Face, has the filmmaker finding a balance between the anarchic impulses of his New Queer Cinema earlier efforts and the stirring maturity of Mysterious Skin. A “sexually undeclared” cutie (Thomas Dekker) is the guide through the movie’s exuberant teenage wasteland, a college film student waiting for his 19th birthday as he soaks up sarcasm from his tart, baby-dyke BFF (Haley Bennett) and negotiates his lust for his hunky, straight, chowder-headed roommate (Chris Zylka). The polysexual hothouse beginning is really just the jumping-off point for a wacky assembly of cults, messiahs, and apocalypses, faced with ticklish aplomb by a cast that includes Juno Temple as a shagtastic party minx and, in a nearly unrecognizable cameo, longtime Araki axiom James Duval. Fusing the fleshy with the anxious (characters are constantly snapping out of humid reveries only to find ominous figures sneaking up behind them), Araki has fashioned something like the young new decade’s own Repo Man.