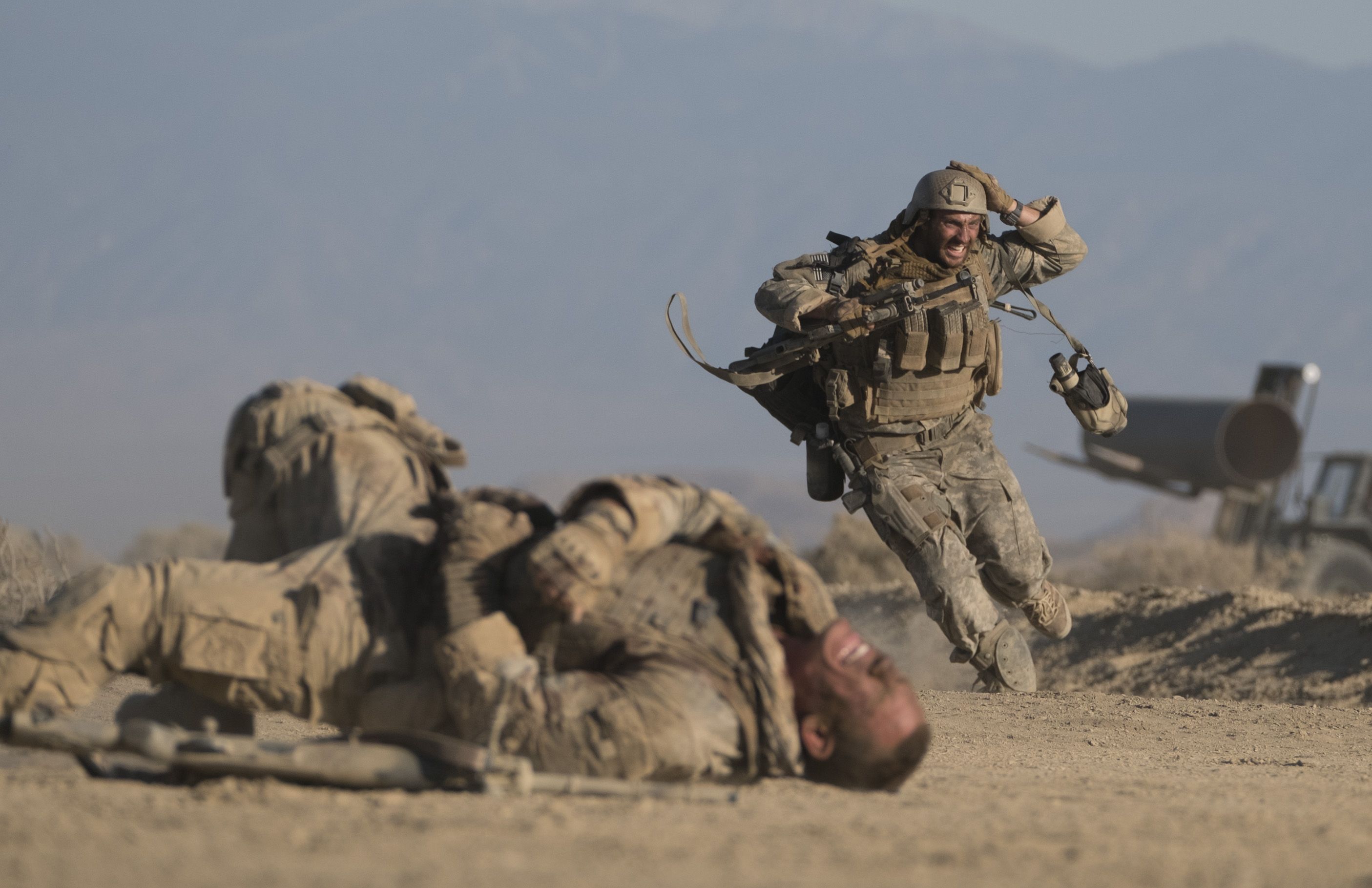 If the recent crop of low-budget, intimate war films featuring a handful of actors in limited locations tells us anything, it’s that studios are desperate to ensure that they get a better return on investment than a full-blown, star-studded action spectacle. It’s a strategy that’s worked ever since the 1950s, when war-themed B movies like Sam Fuller’s The Steel Helmet, Robert Aldrich’s Attack, and Nicholas Ray’s Flying Leathernecks made on the cheap became big earners. In the wake of Fabio Guaglione and Fabio Resinaro’s Mine and Fernando Coimbra’s Sand Castle, which came and went without much fanfare, Doug Liman’s The Wall arrives to see if there’s any juice left in war films without the scope and spectacle with which they’re typically associated.

The Wall avoids the missteps of those recent war films by eliding politics and maudlin backstories for its characters, instead using cat-and-mouse thriller tactics to depict warfare on a purely visceral level. Given our current political climate, one may understandably suspect the titular wall to stand as a cheap metaphor for the cultural divide between U.S. Sergeant Allen Isaac (Aaron Taylor-Johnson) and Juba (Laith Nakli), the infamous, near-mythical American-trained Iraqi sniper who ambushed and wounded Isaac and Staff Sergeant Shane Matthews (John Cena). But the unsteady wall of the film is nothing more than a shield which barely protects Isaac from enemy fire.

Liman’s efficient, muscular direction and the film’s impeccable sound design direct our focus toward the harshness of the setting and the crisis being faced by the slowly dying Isaac. Once the sergeants are cornered by Juba, much of the film’s remaining runtime consists only of Isaac trying to work his way out of an impossible situation while Juba psychologically toys with him over the radio, wearing him down mentally as he bleeds out from his festering wound. Since Isaac’s antenna was shot and Matthews lies injured and passed out since the ambush, Juba serves as Isaac’s only means of contact.

Throughout, their verbal sparring never moves beyond the superficial: Juba provokes Isaac to talk about his past mistakes during the war and Isaac berates Juba for using his U.S. military training to hunt down American troops and contractors alike. And this quarreling detracts from the film’s attentiveness to the hazards of Isaac’s present position. There are, however, only a few brief stretches where the intensity of the man’s grueling battle against the increasing perils of his still-bleeding knee, the harsh desert winds, and the crumbling wall behind which he hides loses its suspense.

The film’s lackluster dialogue is mostly overshadowed by its unwavering commitment to grounding the story in the tangibility of Isaac’s physical experience. The building blocks of Liman’s world aren’t plot points or thematic concerns, but rather the sounds of a knife scraping against stone or gritting teeth and the tearing of muscle during a bullet extraction, the look of a bloody hand grasping at sand and the escalated feelings of anxiety and hopelessness that creep in as Isaac runs out of ideas to escape his precarious situation. What The Wall lacks in emotional or narrative complexity, it largely makes up for in its vibrant representation of the difficulties of war.

Liman’s acute attention to details shows he can still exact as much control over a minimalist setting and narrative as he can with a more grandiose production like Edge of Tomorrow. Shot in anamorphic 16mm, The Wall is full of grainy textures that enhance the grit and grime on Isaac’s visage and the extremities of the barren environment in which he finds himself trapped. This heightens our experience of Isaac’s material reality and provides an immediacy to his increasingly perilous predicament. And all the while, Taylor-Johnson’s physically demanding performance rises to the forefront and dominates the screen, ratcheting up the tension amid a swirling mix of blood, sand, sweat, spit, and dirt. It’s ultimately this ability to boil the exploits of battle down to its essential elements—its physical grind and mental and emotional exhaustion—that helps The Wall pack a surprisingly savage punch.