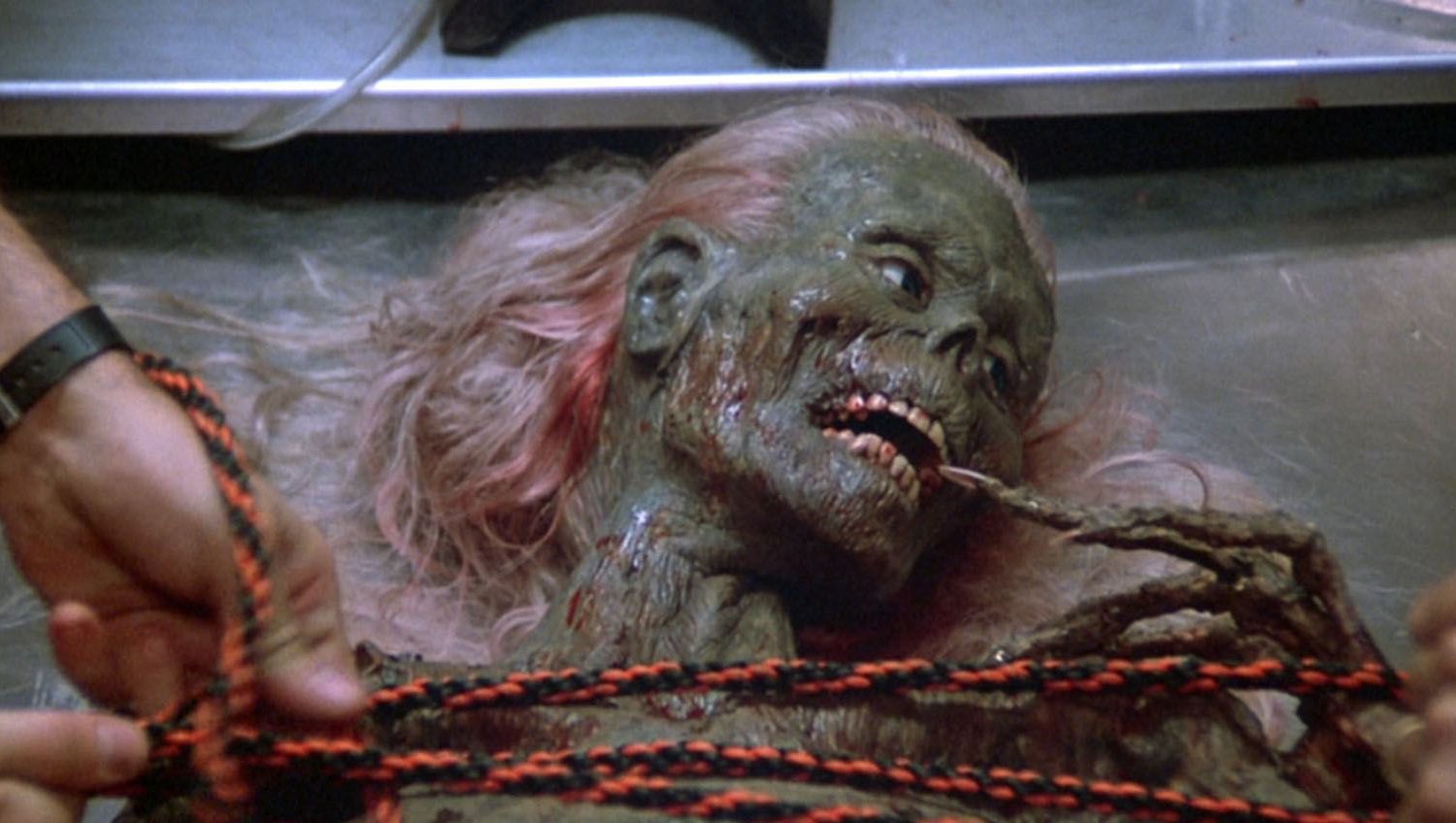 “Not one more preppy!” vowed writer-director Dan O’Bannon when talking about the victims from The Return of the Living Dead, his tongue-in-cheek, splatter-laden homage to George A. Romero’s zombie pictures. Fed up with the generic Barbie and Ken-style actors that were getting sliced up wholesale in 1980s fright flicks, he fills his zombie movie with a group of snarling punk rockers (“What do you think this is, a fucking costume?” grouses one of them, whose studded leather jacket and lip chain define his character, “This is a way of life!”) and a soundtrack of West Coast punk music. The punk attitude, a combination of posturing and self-destructive irony, is a fine match for this most postmodern of zombie movies.

The film opens with one of the punk kids, Freddy (Thom Mathews), trying to clean up his act by getting a job at a warehouse where they store biomedical supplies and a few top secret military canisters that happen to contain the zombies from Night of the Living Dead. His boss, Franke (James Karen), is a blue collar chatterbox who says that Romero’s movie was based on an actual zombie infestation. To prove it, they go down to the basement, where they accidentally open a canister’s seal and let the creatures out. Zombie gas spreads over the local cemetery and crematorium, and before you can say “fast moving zombies” our heroes are holed up inside a funeral home fending off the creatures with guns and axes. Bullets to the brain don’t kill them (“But it worked in the movie!”), and the monsters actually talk. One of the running gags of the film is that whenever paramedics or cops show up to provide aid to the victims, they are instantly slaughtered by the undead, who get on the radio and actually say, “Send more paramedics! Send more cops!”

O’Bannon’s filmmaking techniques are simple and resourceful, with shots following the actors around the room in consistent medium shots as they volley rapid-fire (and quotable) dialogue off of one another. It’s the zombie movie Howard Hawks never got to make, and frankly it’s less Rio Bravo than His Girl Friday with all the ribald humor on display. Well acted, with endearing characters from both the punk contingent and the middle-aged office guys. Linnea Quigley achieves instant B-movie stardom as the punk chick who, in the cemetery, has a brief monologue about how she dreams about old drunken men attacking her and ripping off her clothes before she strips naked and dances around on top of a tombstone. “Aw, man,” says one of her pals, “she’s taking off her clothes again!” Suffice to say, this small offering from the horror genre is a hoot to watch, with never a dull moment.

Review: Flight of the Red Balloon

Looking up: In the Shadow of the Moon