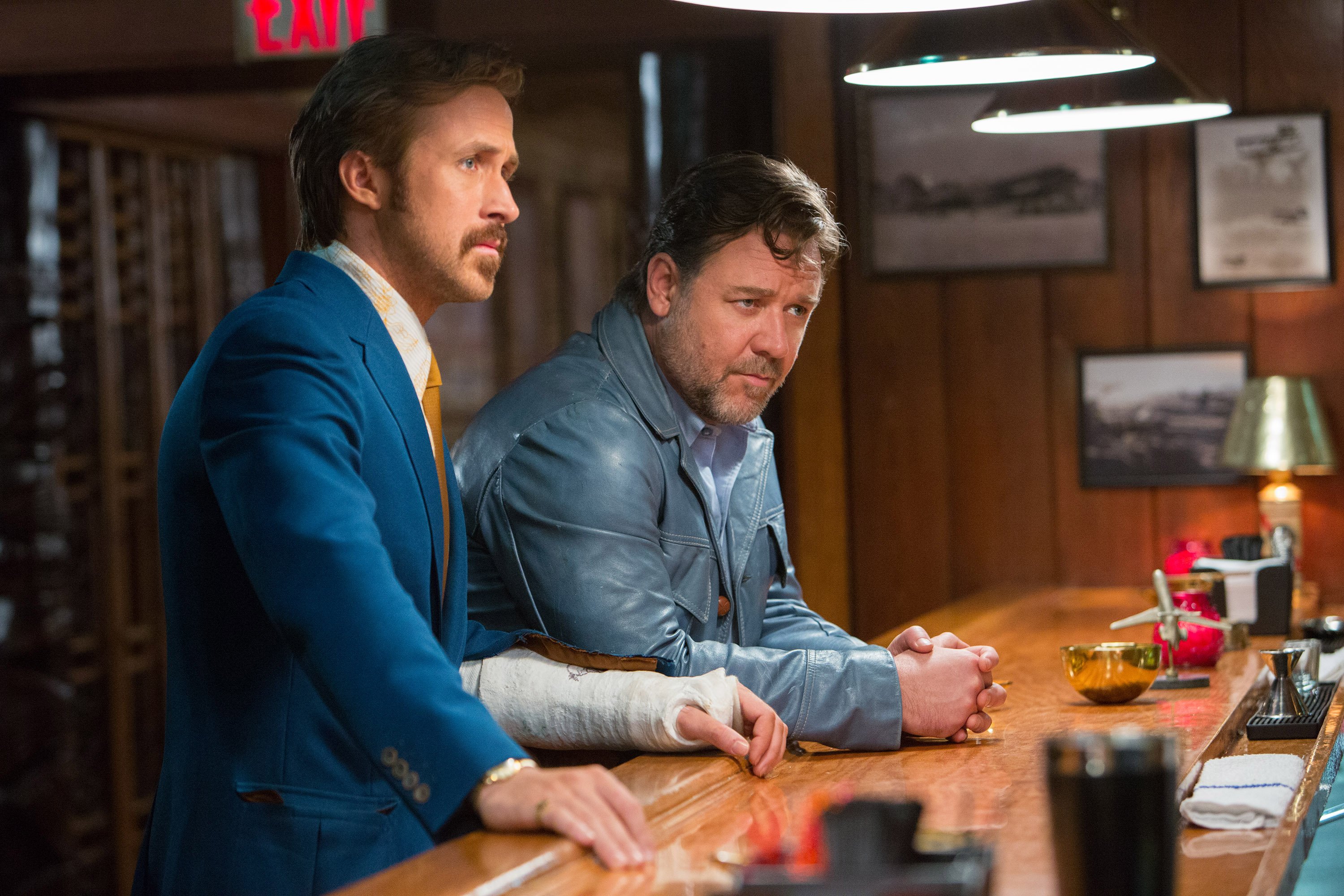 With The Nice Guys, Shane Black never veers too far from the formula he’s employed for almost 30 years. Even so, the film feels like a greatest-hits package that checks off all of the writer-director’s tics. It’s a buddy film about a young, bumbling wild card nursing deep-seated pathos and a grizzled vet who’s too old for this shit, both of whom pair up for a minor collaboration that becomes something more when an innocuous case gives way to a vast conspiracy. You could cobble the film together from leftover pages of previous scripts, but it’s a testament to the sturdiness of the filmmaker’s signature formula that it can still yield solidly entertaining action comedies.

The Nice Guys takes place in 1977 Los Angeles, and Black uses the setting to pull from the first wave of New Hollywood sunshine noirs, many of which start with depictions of relatively commonplace crimes before spiraling outward to observe vast conspiracies involving the mercenary control of a city of excess and glamor. Black’s film follows in that tradition, and it casts L.A. in such cynical terms that even its heroes come off as venal and selfish: Private eye Holland March (Ryan Gosling) bilks paranoid and addled old people out of money to pursue ridiculous cases, while Jackson Healy (Russell Crowe) runs a service where he beats up hebephiles less to keep children safe than for his own sense of righteousness—and a small sum, of course.

The two initially join together to track down a young woman named Amelia (Margaret Qualley), but soon they discover that she may be tied to pornography, and more specifically to the recent death of adult actress Misty Mountains (Murielle Telio). As the film increasingly incorporates the porn industry into the framework of a conspiracy theory involving the auto industry at the height of its political power and the first stage of its downfall, it naturally recalls the Coen brothers’ The Big Lebowski, though it presents a larger, more entwined satirical target in the manner in which it counterintuitively expands to become a critique of the auto industry at the height of its clandestine power and ruthless self-protection.

Numerous twists clarify the seemingly tenuous connection between cheap sleaze and industrial oligarchy, but the true delight of a Shane Black script is, of course, the dialogue. The Nice Guys doesn’t want for great exchanges, and even disposable conversations brim with acidic wit, like March’s response to a shocked young girl’s exclamation that he took the Lord’s name in vain: “No I didn’t, Janet. I actually found it very useful.” Healy doesn’t speak as quickly as March, but he always holds his own in battles of wit, and Crowe’s sluggish delivery works surprisingly well to modulate the antic verbal pace of Black’s writing, giving contours to a style that occasionally rushes.

But if Black’s scripts largely call attention to their own cleverness, they nonetheless foreground character-driven humor in a way that other films of this kind seldom do. Instead of just writing funny lines for his actors to speak, Black thinks about what sense of humor each character might have, and he even layers in jokes to the point that he can build callbacks that get laughs and both advance and complicate his plots. He even elicits emotional payoffs from his jokes, as when a seemingly throwaway gag about March having no sense of smell prefigures the revelation that his useless nose prevented him from detecting a gas leak in his home, to ruinous consequences.

As such, because their lines have already been tailored to them, the actors can do more with them. For example, Crowe, never known for comedy, manages to spin his usual gruff, hangdog acting mode into withering sarcasm, turning Healy into a straight man who can give as good as he gets. Angourie Rice, who plays March’s young daughter, Holly, might have come across like so many children reading advanced scripts: a kid eerily and dissonantly speaking with an adult’s voice. Instead, Holly consistently feels like an identifiable child, as Rice finds a balance between her character’s immature enthusiasm for her father’s reckless line of work and a growing exasperation for how his dead-end life threatens to ruin hers before it even starts.

But the film, by and large, belongs to Gosling, who overcompensates for his steady decline into self-parodic actorly catatonia with a hyper-expressive performance. Gosling prioritizes physicality, calling attention to the way he stumbles around when drunk or reacts to the sight of a murder with a small but unmissable eyebrow twitch of panic. An early scene of March being confronted by Healy while in a bathroom stall showcases a deft bit of body comedy. In it, March attempts to keep a gun trained on Healy while covering his privates, then frantically putting out the lit cigarette he drops into his pants, all the while struggling to keep the stall door open and to maintain a shred of dignity. There’s a lot to like about The Nice Guys, but it’s Gosling’s boundless energy that will most invite repeat viewings.