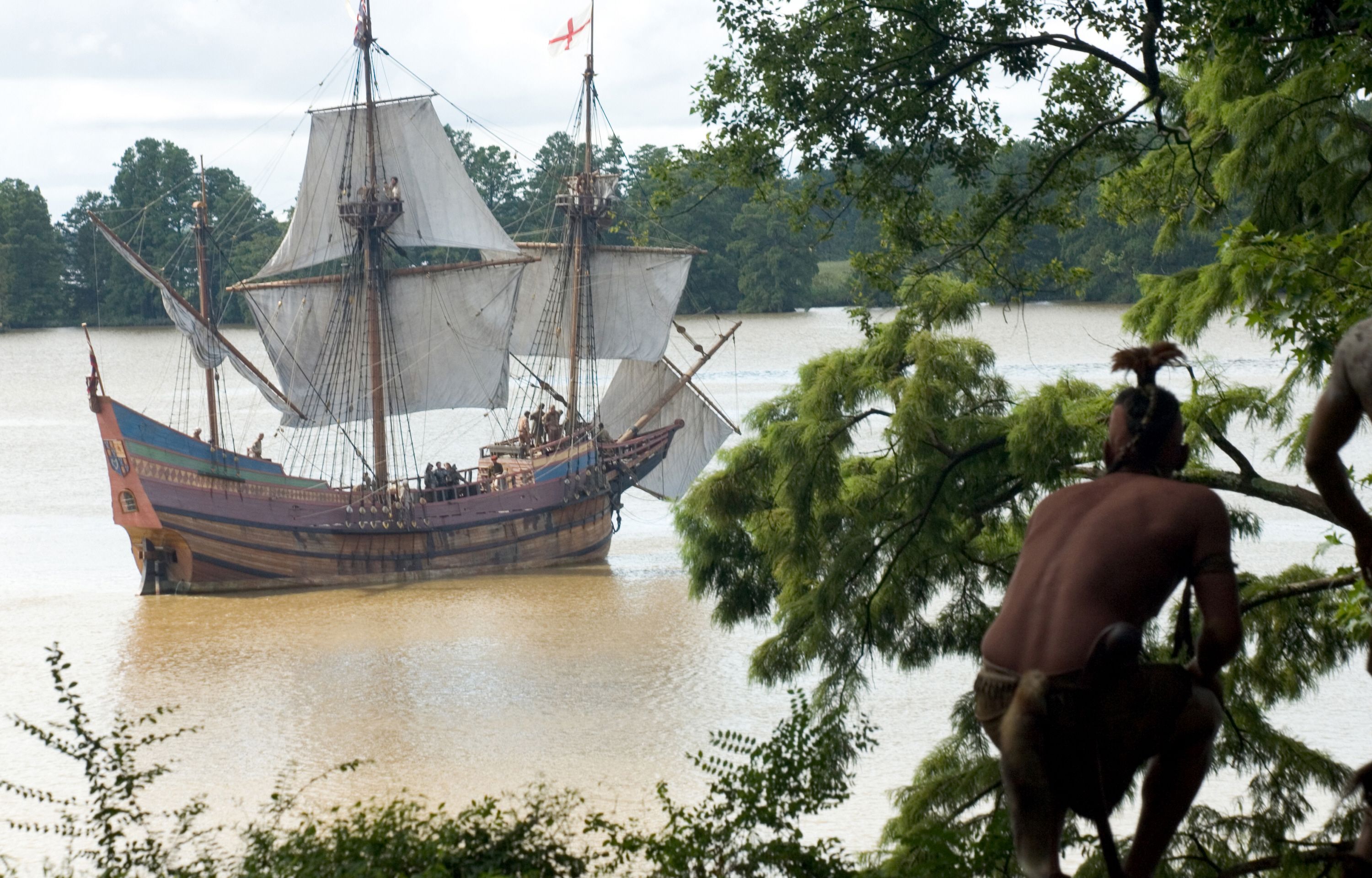 The sociological and emotional heft of The New World is encased in a swirl of hallucinatory images. This is a fitting description given that Terrence Malick approaches the story of John Smith and Pocahontas as if it were a specimen of lost time trapped in amber. He turns the fossil in his hands, reflecting the light of the sun through the resinous shell of history and onto his characters from many remarkable, expressive angles, illuminating the tragedy of John Smith and Pocahontas’s impossible love through the horrible conquest of the Powhatan tribe’s paradise and the sad spectacle of Pocahontas’s conversion into an English woman. The purpose of this lyrical experiment is an attempt to regain lost time—to substantiate the lore of John Smith and Pocahontas with profound, adult feeling. It takes back the story Disney hijacked and infantilized in 1995’s Pocahontas.

A lesser filmmaker might have used shallow dramatic busywork and a thousand unnecessary words to communicate the same sense of moral and social consequence a single forlorn image from The New World conveys. Malick’s vernacular is predicated on transcendental impulses and a liberal use of ellipses. This is why many critics and audiences have a hard time with his films: Like Terence Davies, he’s a poet working in a medium whose audience is unused to unconventional expressions of thought and emotion. Malick’s lyrical style befits the The New World’s long-storied context, and the beauty of the film is how he uses the reverie of his cinematic language to radiate the collective sensation of a half-remembered dream. This is the way this great filmmaker intimately connects us to the past—through the language of the soul and imagination.

Malick tells a better story through the subversive cartographic title sequence that opens the The New World than your average historical drama divulges during its entire running time. The maps Malick uses not only provide the story with geographical specificity but they also vibrantly portend the colonization of the new world and its inevitable spiritual destitution. This expressionistic artifice whets our appetite for the tour de force of sight and sound epitomized by the film’s opening minutes, during which the 100-plus aristocrats of the London Virginia Company arrive in America and settle in Jamestown. As the Englishmen make their way nervously through the chest-high grass surrounding their new colony, Malick’s images—combined with the alternately menacing and enchanting sweep of James Horner’s score—evoke a weighty sense of danger and discovery.

Great poet that he is, Malick has a gift for parallelism and an affinity for romantic motifs. John Smith (Colin Farrell) arrives in America a prisoner. Chained deep inside the ship’s hull, he uses his hands to catch falling drops of water and reach for the warmth of the sun that shines in the distant sky. This image of imprisonment at once contrasts and corresponds with the equally mythic vision of Pocahontas (a remarkable Q’Orianka Kilcher) swaying her arms in the wind toward the heavens. John Smith and Pocahontas find each other as if by chance; it’s not exactly love at first sight but Malick’s stunning shifts in register impart the intense feeling of history being set in irrevocable motion when they catch glimpses of each other in the warm summer wilderness. “Eden lies about us still,” says Captain Christopher Newport (Christopher Plummer) late in the film, a fitting allusion given that Malick plays the love story between his main characters as the rapturous birth of a nation, if not the world.

Malick may or may not have waited an eternity for a bird to strategically soar across one of his compositions, but you never question the organic aura The New World exudes. Malick’s camera is so connected to his environment it’s as if the nature of the film is responsible for directing the action; this is most instructive in the major battle scene between the Powhatan tribe and the Jamestown settlers when the flight of a lone bird seemingly launches both camps into battle. The abandon with which Malick gives himself to the world shames the calculated, unfeeling aesthetic of Theo Angelopoulos’s fatuous The Weeping Meadow, which weeps only for its own besotted sense of seriousness, while the unease of John Smith and Pocahontas’s impossible love affair—which Farrell and Kilcher beautifully carry out as performance art—shows-off the banality of Ang Lee’s Brokeback Mountain.

The exquisiteness of The New World and how it reveals itself to its audience is flabbergasting—like a heretofore unknown cave painting impeccably preserved except for a few spots here and there eroded by time and nature. It’s this purity of presentation and spirit that gives the film its universal attraction. With minimal dialogue and dramatic fuss, Malick examines the lifestyle and traditions of the Powhatan people on an elemental level, using visual and aural rhythms that feel as if they’ve been cued to the beat of the human heart—none of that blue-corn-moon Disney bullshit the director responds to when a broken Pocahontas asks, “Why does the earth have colors?” Some may scoff at the film’s sudden tonal shifts, but these leaps in time (and faith) are profoundly in sync with the story’s turmoil. Malick never loses sight of the story’s history but his daring montage still leaves some things to the imagination, like the process by which the hungry British men of the original Jamestown colony went mad and how the Native Americans came to trust their new neighbors enough to trade with them.

The New World certainly calls attention to itself—any work of art this commanding always does—but it does so without arrogance about its design. It doesn’t belabor historical accuracy the way Master and Commander does, which is not to say the film’s details are arbitrary. Along with every other component—from the cinematography and score to the many fine performances—the film’s attention to historical detail is just one composite of a Zen-like mise-en-scène bursting at the seams with emotion and inquisitions about idealism and a world being remade in the image of another. It’s this serene, intuitive conviction for truth that annoys some critics (fans of Titanic no doubt), who confuse Malick’s generosity for pretense. Seriously, is there a more expressive and succinct illustration of Pocahontas’s estrangement from her people—and the end of the new world as they knew it—than the images scattered throughout the film of birds moving further and further away from the girl’s sightline? The birds retreat as she retreats into the gilded cage held ajar by the British.

Malick equates the union and separation of John Smith and Pocahontas to two worlds drawing near, grinding together, and subsequently pulling apart. In this way, The New World’s epic scale has equal room for humanist compassion and breathtaking action. Banished from her tribe for cavorting with John Smith, Pocahontas goes to live in the Jamestown colony, where she marries the widowed John Rolfe (Christian Bale) and bears him a son. The film begins to lose some of its elasticity around this point, but that’s only fitting given the restrictive social vice that ensnares the girl. Arriving in England, she is a stranger in a strange land, but while her displacement may be devastating, a reverential Malick conveys through the film’s breathtaking final minutes a sense of divine reconnection through death. The English may have exorcised her freedom but not her spirit. It’s an appropriate sentiment for a film that also refuses to shake itself loose from the confines of our memories.

Review: When the Sea Rises