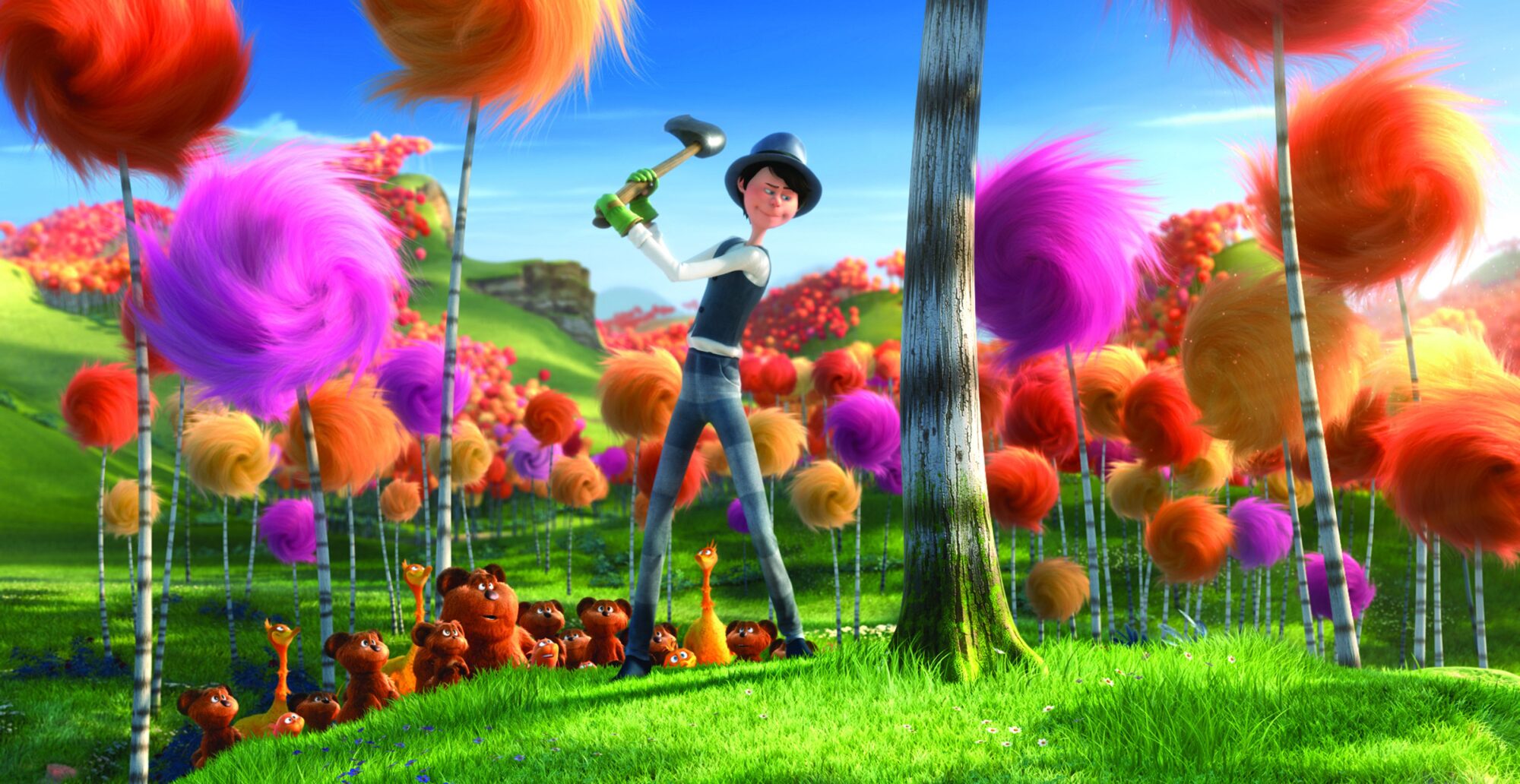 Dr. Seuss’s characters are so iconic and his stories’ messages are so clear and concise that they practically beg for cinematic treatment, even as their relative two-dimensionality and self-contained nature frustrate expansion into feature-length form. Consequently, even with a solid effort like Horton Hears a Who!, Seuss adaptations have a tendency to feel unnecessary, puffing up what was perfectly formed to begin with. Nonetheless, as far as such efforts go, The Lorax is a modest gem, failing to significantly enhance its source material’s ideas but still delivering a zany, rollicking, multi-character version of Seuss’s environmental cautionary tale, which director Chris Renaud infuses with a brand of bonkers humor in line with that of his prior work, Despicable Me. That’s most evident in his film’s conception of Seuss’s humming-fish and brown barbaloots (fuzzy bears) as sprightly, mischievous minion-like comedic relief creatures. Yet it more fundamentally extends to rocket-fueled narrative and visual pacing, in which the camera zooms, sways, and whisks about with manic energy, as if so taken with the bountiful Seussian sights of squiggly lined houses, pinwheel-shaped Truffula trees, and swelling and surging hills and valleys that it can’t wait to move on to gaze at the next kaleidoscopic wonder.

The Lorax’s CG style is reminiscent of Horton Hears a Who!, but boasts greater vibrancy, and like that predecessor, it too has a plot that faithfully, if somewhat mundanely, enlarges Seuss’s original framework. Still condemning greed that fuels environmental desecration, Renaud’s film follows Ted (Zac Efron), a 12-year-old living in the totally artificial town of Thneedville who goes in search of a real organic tree, a quest aided by his spunky grandmother (Betty White) which leads him out of his walled enclave—much to the concern of Mr. O’Hare (Rob Riggle), a diminutive tycoon villain who views oxygen-producing trees as a threat to his bottled-air business—and to the home of the hermit Once-ler (Ed Helms). Rather than sheer curiosity, Ted is here driven by a desire to impress his love Audrey (Taylor Swift), a somewhat pedestrian motivation that, fortunately, doesn’t interfere with the Once-ler’s ensuing tale of how he came to destroy a forest of Truffula trees by harvesting them for his 100-use creation, the Thneed. Despite regular interludes involving Ted’s interactions with his family and attempts to evade O’Hare, flashbacks to the Once-ler’s saga form the brunt of The Lorax, and naturally revolve around his bickering relationship with the Lorax (Danny DeVito), the “slightly annoying” guardian of the forest who tries, without success, to halt the Once-ler from chopping down trees in the name of profit.

From the humming-fish and barbaloots’ pratfalling hijinks to lively musical numbers, including the electric guitar-wielding Once-ler’s signature “How Bad Can I Be,” staged with pop-up-book-designed abandon, the film finds a way to broaden Seuss’s book without straying far from its main moral, and its aesthetic fidelity to its source works in tandem with Ken Daurio and Cinco Paul’s sharp script to constantly conjure memories of the author’s indelible poetic prose. Though he’s given an amusing climactic moment in which he attempts to oppose a pro-environment group sing-a-long, the avaricious O’Hare is a ho-hum kindred spirit to the Once-ler—who, himself, straddles an uneasy line between being villainous and redeemable—and the finale’s chase to protect the last Truffula seed feels a tad too reminiscent of WALL-E. Still, Renaud crafts his action with equal doses of surreal sweetness, silliness, and flair, and does so without ever feeling overly pushy and desperate to please, as with a great, offhand gag in which a scootering Ted races toward a ramp to jump over a canyon, and then plummets into said chasm when the ramp tips downward. As a result, this Lorax proves a lot like the Once-ler’s Thneed—something that, however uncalled for it may seem, boasts snappy humor and inventive energy that more kids’ films need.