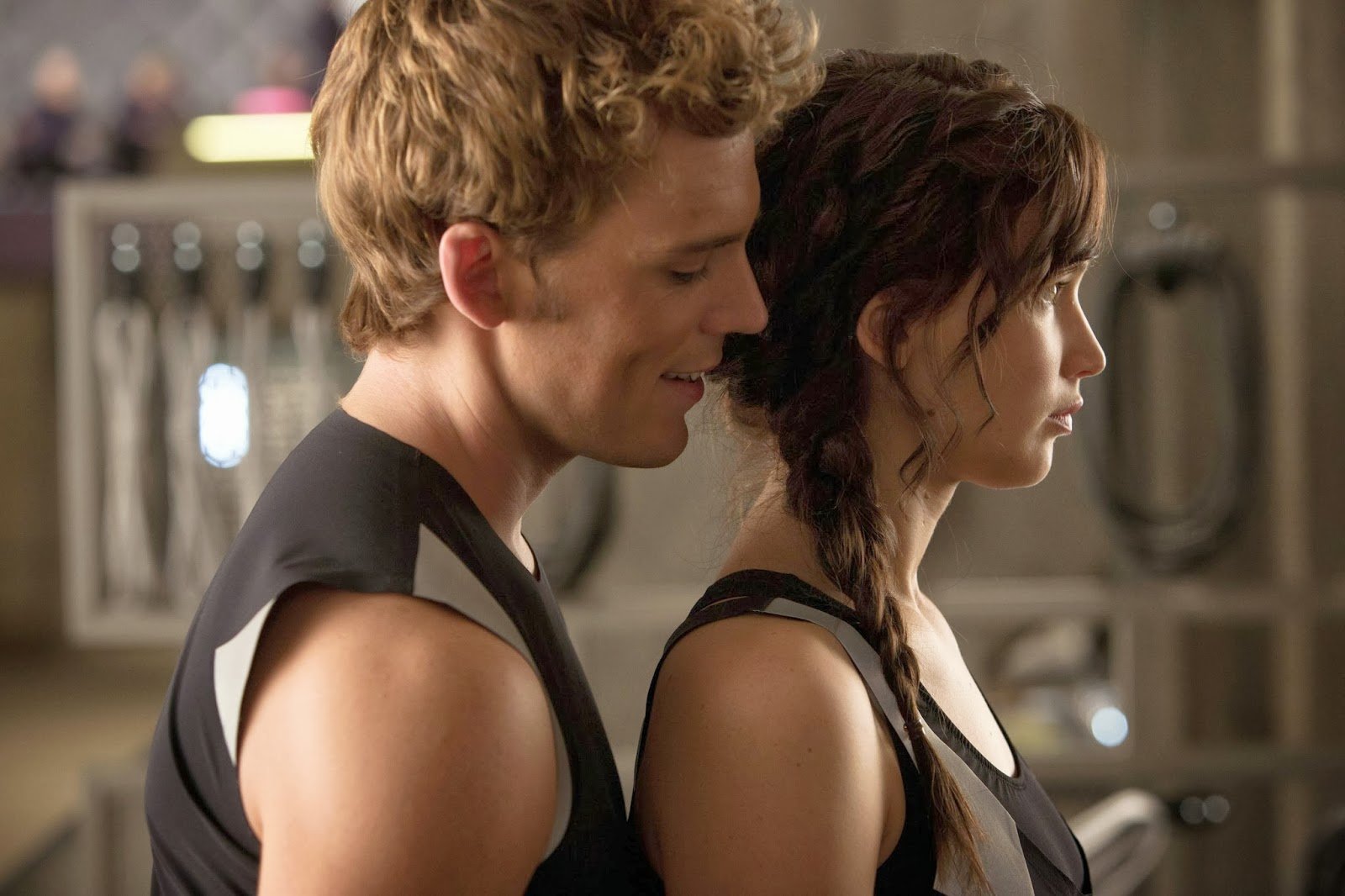 Of the many surprisingly poignant moments in The Hunger Games: Catching Fire, the most jarring comes courtesy of Effie Trinket (Elizabeth Banks), the über-styled PR puppet who serves the corrupt Capitol, and is tasked, like many, to coddle the oppressed, dystopian Districts of Panem, distracting them from the horrors that pervade their daily lives. (Spoiler alert: the Capitol annually sends the Districts’ youth to compete in televised, fight-to-the-death bloodsport.) After the unprecedented announcement that the latest Hunger Games will force two past winners, or “victors,” from each District into a deathtrap-filled arena, Effie, the irrepressible fraud whose job includes gleefully declaring which males and females will fight, gets mildly choked up, her meticulous mascara slightly running.

Of course, in this moment, Effie is reading the names of the chosen victors from District 12, who include co-protagonists, ostensible lovebirds, and last year’s winners, Katniss Everdeen (Jennifer Lawrence) and Peeta Mellark (Josh Hutcherson), a tailored pair Effie regards as the crowd-pleasing achievement of her career. But just as Catching Fire never feels like it’s merely peddling a Chosen One narrative (or, worse, an unfounded Special Girl saga a la Stephenie Meyer’s oeuvre), Effie’s break in character seems less rooted in personal bias than the growing, common notion that something’s epically off in Panem. Katniss’s concocted act of defiance in the last film, wherein she and Peeta threatened suicide in favor of killing each other, didn’t just yield a dual triumph, but the start of an uprising. And even Effie, a picture of privileged, blinder-wearing, Capitol hypocrisy, is being forced to feel—to truly face her world’s radical injustices.

If Gary Ross’s The Hunger Games found its urgency in the horrors of kid-on-kid fatalities, a backdrop of an idea that gave eerie weight to Collins’s first book, then Francis Lawrence’s Catching Fire finds it in the collapsing of a societal facade, and the unifying, class-trumping bonds such a phenomenon can create. Effie isn’t the only pivotal Capitolite to notice that there’s trouble in paradise, and that Katniss has set off a ripple effect that’s influencing all the economically diverse Districts (the further it is from the Capital, the less wealth a District has). In a very different way, Hunger Games emcee Caesar Flickerman (Stanley Tucci), another dolled-up cartoon employed to mask the Capitol’s in-plain-sight evils, gets his own reality check when presenting returning victors to the upper crust. He’s left virtually speechless when District 7’s uninhibited badass Johanna Mason (Jena Malone) hollers “Fuck you!” to the Capitol, as well as when all the on-stage victors cut the scripted bullshit and join hands—a throng of supposed opponents standing united. 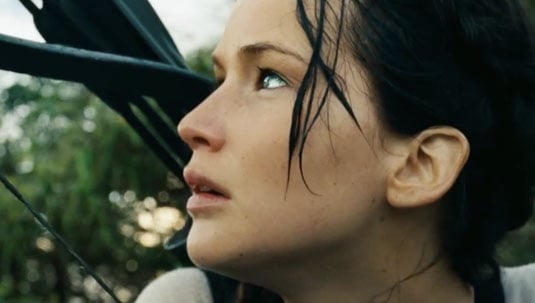 Such subversion is worrying the whiskers off of icy dictator President Snow (Donald Sutherland), who has a mighty bone to pick with Katniss, and arranges the novel tournament as a clean way to kill her off (his approval rating drops a bit with the faux, pre-Games announcement that the fan favorite isn’t just engaged to Peeta, she’s also bearing his child). In the first of three films he’ll helm for this series (he’s also signed on to direct parts one and two of Collins’s trilogy-capper, Mockingjay), Lawrence presents a moving spectacle that’s both loyal and superior to the author’s second novel. While Battle Royale-style carnage proves almost equally potent in print and on screen, this story’s core theme of revolution is far more affecting when seen in the faces of its characters, be they an enraged victor, a scrambling despot, or a makeup-caked publicist with a butterfly-covered bouffant. Furthermore, while Collins’s Catching Fire couldn’t boast half the propulsion of its predecessor, Lawrence’s movie jacks up the breathless pace, darting, but not rushing, through an engrossing first half before diving headlong into an adventure that barely gives its participants a moment’s rest (like The Hunger Games, Catching Fire feels as though a solid film has gone by before the Games even begin).

And yet, the director hardly seems bent on besting his source material. While Ross and his co-screenwriter Billy Ray markedly—and, for the most part, shrewdly—trimmed details in their adaptation, Catching Fire’s writers Simon Beaufoy and Michael Arndt work with their maestro to effortlessly sprinkle in nuances that are fan- and plot-friendly. (Collins, it should be noted, is also credited as a co-screenwriter on both films). In addition to the world of Panem, specifically the Capitol, feeling much more richly realized (the doubtless result of a practically doubled budget and a less hurried production), the proceedings here are laced with elements previously left unexplored, like the stark contrast between Capitol gluttony and District 12 starvation, and the inclusion, if unacknowledged, of Avoxes, traitors who’ve had their tongues removed and now work as servants. Viewers will also notice that, while Ross’s film took the very form of the reality show that exists within this saga, watching Katniss and Peeta fight for their lives through the lenses of cameras inside the arena, Catching Fire returns to the author’s technique of embedding the audience in the action, rarely acknowledging the grisly broadcast so that events and relationships are never at arm’s length. (In a sense, the first film’s viewer-as-voyeur conceit acted as a franchise entryway, something the sequel doesn’t need.)

There’s a point in this tale when Katniss finds yet another way to drastically buck the system, and in the movie, it’s also the point when one realizes how rare it is to see a hard-as-nails heroine in a modern, popular film that’s this effective. With destruction blazing around her, Katniss appears intentionally Christlike, and it’s a symbolic stance we’ve seen countless male characters assume, from Superman to Neo, but few females. This, too, is the moment when the casting of Jennifer Lawrence is firmly cemented as a dynamite choice. Exuding tremendous emotion and ferocity in a way she didn’t the first time around, Lawrence is incredible, doing such things as compensating, in a single tearful scene, for the lackluster staging of Katniss’s friend Rue’s (Amandla Stenberg) death in The Hunger Games. Additionally, upon the first film’s release, the public wasn’t quite so aware that Lawrence is a crowd-pleasing rebel herself, hurling zingers in Academy press conferences while nevertheless seeming grateful and human. Is there anything this girl can’t do? She’s poised to earn another Oscar nod for her work in American Hustle, and she’s currently piloting what might be the strongest female-led sci-fi series since the Alien films. When it comes to today’s actresses, Lawrence is, in a very real way, stirring up a mini-revolution of her own.