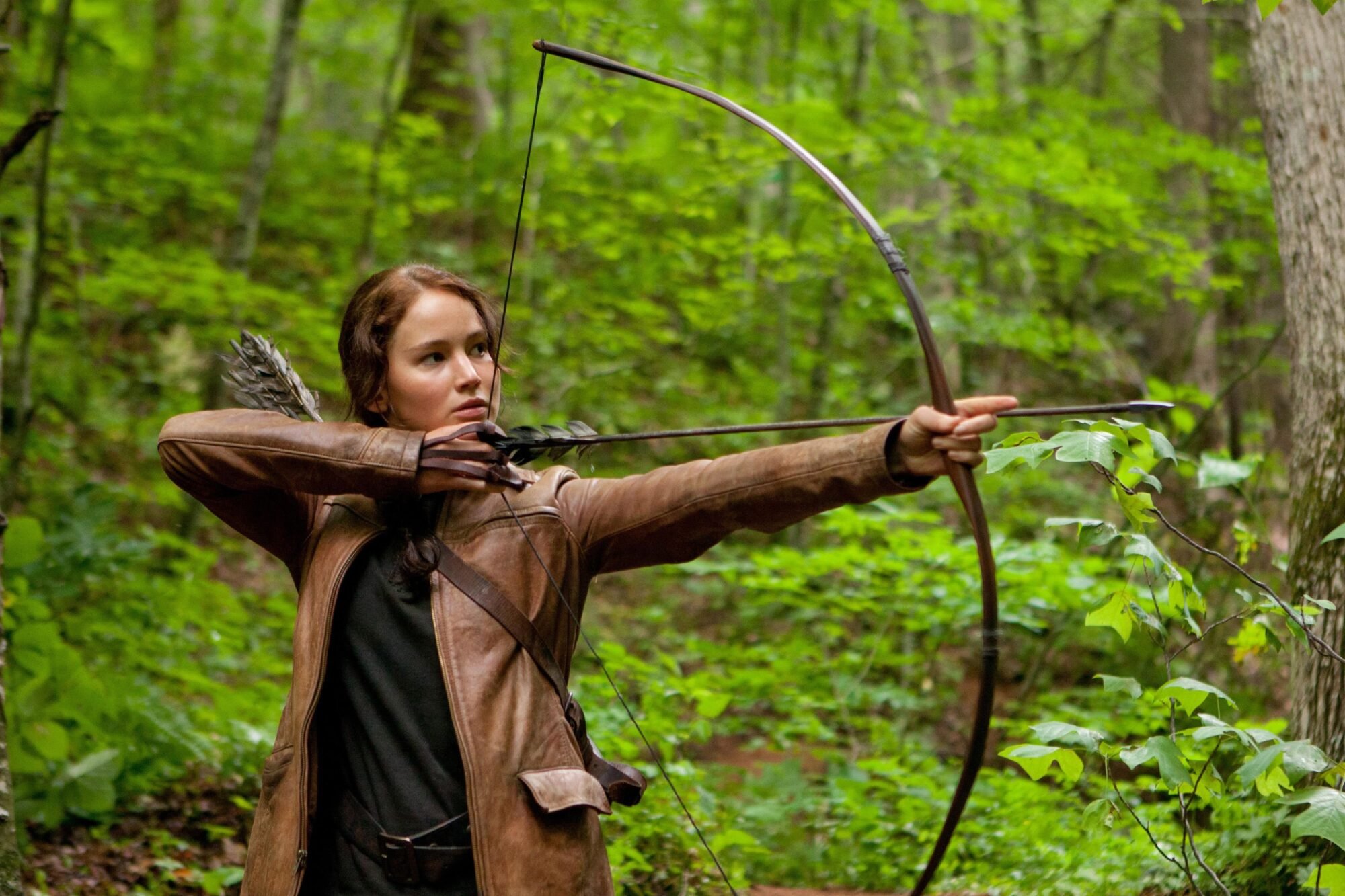 Dystopian revolution is at the heart of Suzanne Collins’s Hunger Games trilogy, which imagines a futuristic, postwar North America at the mercy of an iron-fisted empire. But deeper still is mandatory adolescent homicide, a plainspoken, horrifying bloodsport that, in the first installment especially, lays down eerie and deeply powerful stakes. For those who aren’t hip to the story (or, given the incessant chatter, simply aren’t hip), the titular games are an annual, televised form of punishment, wherein the scattered “districts” who once rebelled are reminded to fall in line by watching 24 of their children fight to the death until only one remains. No matter how Collins chose to develop her saga, she licked half the battle with her continually unsettling crux, which provides a firm foundation made of heady dramatic gold. The Hunger Games, whose script was co-penned by Collins, Billy Ray, and director Gary Ross, repeatedly tests the disquiet of kiddie-carnage awareness, proving its awesome influence again and again. It’s what allows the film to get away with breathlessly advancing its plot, and whizzing past the development and connections of certain characters. It’s what justifies the lack of an R rating, as dread and unease are surely high enough without the aid of vivid gore. In short, it’s what’s always there to break the movie’s fall.

Which isn’t to say that this widely targeted insta-sensation simply rests on its provocative laurels. The Hunger Games is aptly lensed, shrewdly cast, and keen to make the most of its glaring cultural parallels. It’s hard and tough in nasty bursts, and it ratchets tension into the white-knuckle zone when such a potency is utterly crucial. It begins with a lottery right out of Shirley Jackson’s short story, with Katniss Everdeen (Jennifer Lawrence), the stouthearted backbone of her fatherless family, volunteering to take the place of her terrified young sister, Primrose (Willow Shields), whose name is called to represent her home in the yearly death match. Mouths hang agape amid the nightmarish ceremony, which unfolds with faux exuberance and demonic bureaucracy, and is overseen by gussied-up grotesque Effie Trinket (Elizabeth Banks), an embodiment of the superficial puppet-mastery of the all-powerful Capitol. Picked to join Katniss is stocky Peeta Mellark (Josh Hutcherson), a morally upright baker’s son who hasn’t had it as bad as the Everdeens, but isn’t whistling his days away either. Only when these pitiful peasants are ushered off to die are they given tastes of the Capitol’s riches, and at the risk of citing that which has been referenced ad nauseam, it’s impossible not to acknowledge the 99:1 ratio of this unbalanced, on-the-brink population. (“I don’t like underdogs,” says Donald Sutherland’s blandly icy, tradition-keeping dictator, President Snow, “and if you saw them all, you wouldn’t like them either.”)

If the movie possesses the same nimble-by-any-means pace of its source material, then the speed with which the production itself was hurried along becomes evident in the Capitol, a largely CG, largely nondescript Eden where Greek architecture meets your typical sterile surfaces, and storm troopers walk among human castaways of Whoville. However tacky, the neon fashions and twirly hairstyles provide a certain distinct aesthetic, but the place is otherwise an unremarkable pit stop, as hastily and routinely pulled from Collins’s pages as Effie and Haymitch Abernathy (Woody Harrelson), an ex-victor and current mentor who’s almost wholly defined by cartoon-flat alcoholism. And yet, throughout the time spent at the film’s oppressively privileged Emerald City, there’s hardly a moment that isn’t engrossing, as Katniss and Peeta are shuffled through training alongside the other boys and girls, whom they’ll have to evade and kill in a manmade arena of woods and rugged terrain. There’s roughly one whole satisfying hour in the can by the time the hopefuls, or “tributes,” try their luck in the fateful battle royale, making this the rare movie that’s its own double feature, the first half feeding the nibble-your-nails approach of the second.

When the games commence, the triumphs of this film adaptation scurry to the forefront, including the sound design, and the score by T-Bone Burnett and James Newton Howard, which nicely steps in for the bloodcurdling screams of dying teens perhaps too terrible for the target YA audience. Though requiring a certain vexing acceptance of implausibility (how on earth are cameras capturing everything?), The Hunger Games often sets a fine example of how to trim narrative fat, and better yet, it parlays tricky elements into user-friendly social commentary. This isn’t the ultimate sci-fi opus to reflect our dehumanizing and debauched consumption of media, but it does step beyond Collins’s novel to use reality television as an almost interactive storytelling tool. Like Andy Cohen crossed with Dame Edna, Stanley Tucci is a scream as Caesar Flickerman, the telecast’s fairy godfather of an emcee, who essentially solves the film’s expository problems while pointing a cheeky, meta finger at not just the in-text audience, but us too. Caesar’s intermittent play by play saves Katniss from having to explain, for instance, what a “Tracker Jacker” is, and it also delivers a highly effective tinge of viewer guilt, for no longer are we simply reading about these events; we’re spectators of the grisly sport, now projected for all to see.

One wonders how such a project came into the hands of Gary Ross, an ostensibly cuddly filmmaker who hasn’t helmed a movie since 2003’s Seabiscuit. Apparently someone was savvy enough to recognize that Ross could bring to The Hunger Games the same thing he brought to Pleasantville: a visualization of a society poised to wash away the toxic veneer that’s eating at its soul. Ross’s use of handheld cameras (he borrows Clint Eastwood’s cinematographer, Tom Stern) at first seems a horrid overstatement of post-apocalyptic technique, but it quickly proves the proper method, adding necessary grit and tone-enhancing immediacy. The performances drawn from his actors are better than most will expect, especially in regard to Hutcherson, Lawrence, and 11-year-old Shields.

But this is hardly an auteur’s movie, and while Ross’s efforts are quite commendable, there’s little that seems to boast a unique directorial stamp. A very solid adaptation that will send many a rabid reader over the moon, The Hunger Games is more notable for the holes it doesn’t fall into than the great heights it reaches. And Ross, armed with organization and loyalty to the text, predominantly serves as the re-teller of a story that was too big to fail, blessed with juicy relevance and a whale of a chilling premise. The odds, as they say, were already in this film’s favor.

Review: An Encounter with Simone Weil