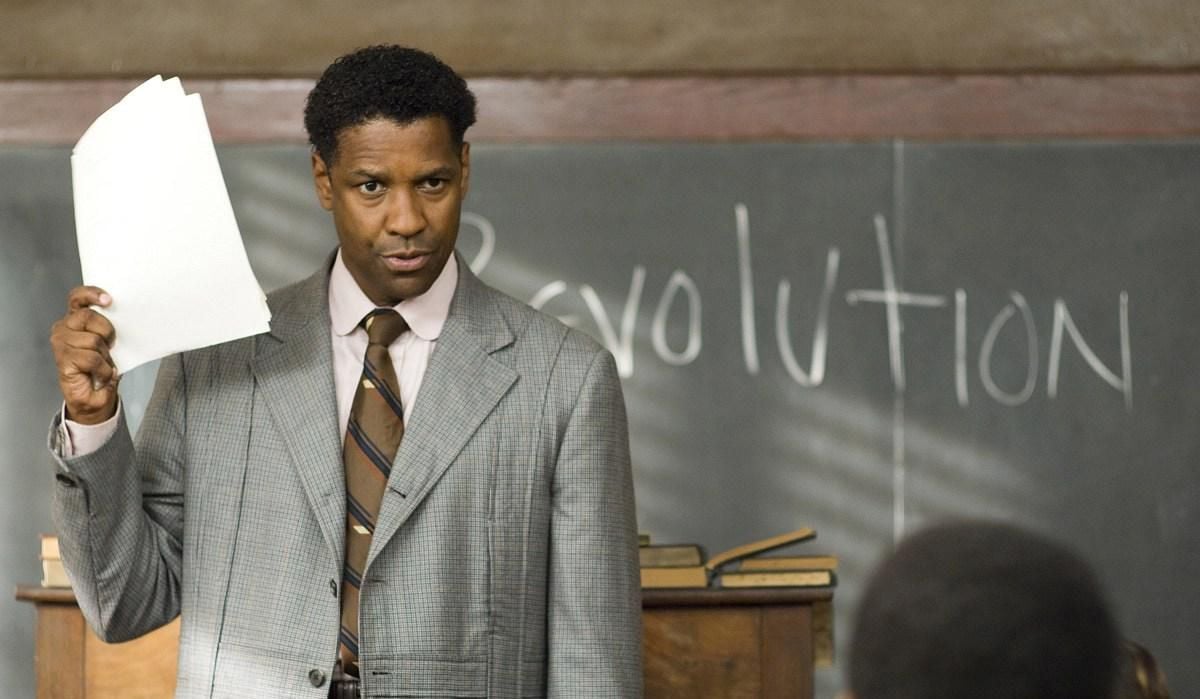 Without unpredictability or the possibility of an unhappy ending, how can a film truly inspire? It’s a question that hangs over many uplifting Hollywood dramas, including Denzel Washington’s The Great Debaters, a based-on-real-events story with an unimpeachable message—that education begets true strength and courage—and nary a moment that doesn’t subscribe to hackneyed conventions designed to coddle rather than stimulate. Washington’s second directorial effort is a threadbare affair, his tale about the triumphs achieved by the 1935 debate team from Texas’s all-black Wiley College proving barely more than a litany of rote personal and social conflicts and victories. Such cozy familiarity extends not only to screenwriter Robert Eisele’s plotting and Washington’s respectably nondescript direction but also to the latter’s lead performance as professor, debate team coach, and union-organizing rabble-rouser Melvin B. Tolson, a role which, after American Gangster’s villainous posturing, lets the star slip back into the comfortable skin of a noble, wise mentor with a gift for bellowing oration. Firebrand Tolson is the Malcolm X to tempered theology professor James Farmer Sr.’s (Forest Whitaker) MLK, a dichotomy that’s hardly played up and, consequently, turns out to be far less interesting than the fact that the actor playing Farmer’s 14-year-old prodigy son, Jr., has the über-movie-star name of Denzel Whitaker. Tolson teaches his three gifted squad members—rebellious Henry Lowe (Nate Parker), feisty Samantha Booke (Jurnee Smollett), and Jr.—how to use their wits as tools for self-improvement and as weapons for societal change, while they in turn learn about themselves through public speaking, run-ins with pro-Jim Crow racists, and a prickly love triangle that isn’t so much resolved as simply dropped. What The Great Debaters imparts, however, is nothing more and nothing less than the common, dispiriting fact that mainstream filmmakers (and their backing studios) firmly believe that moviegoers desire merely the same old tired thing in slightly different clothes. That assumption may very well be correct, but if this type of well intentioned yet calculated, mechanical saga is what passes for cinematic uplift these days, then I’ll take a second helping of bleak misanthropy, please.

Review: Taxi to the Dark Side