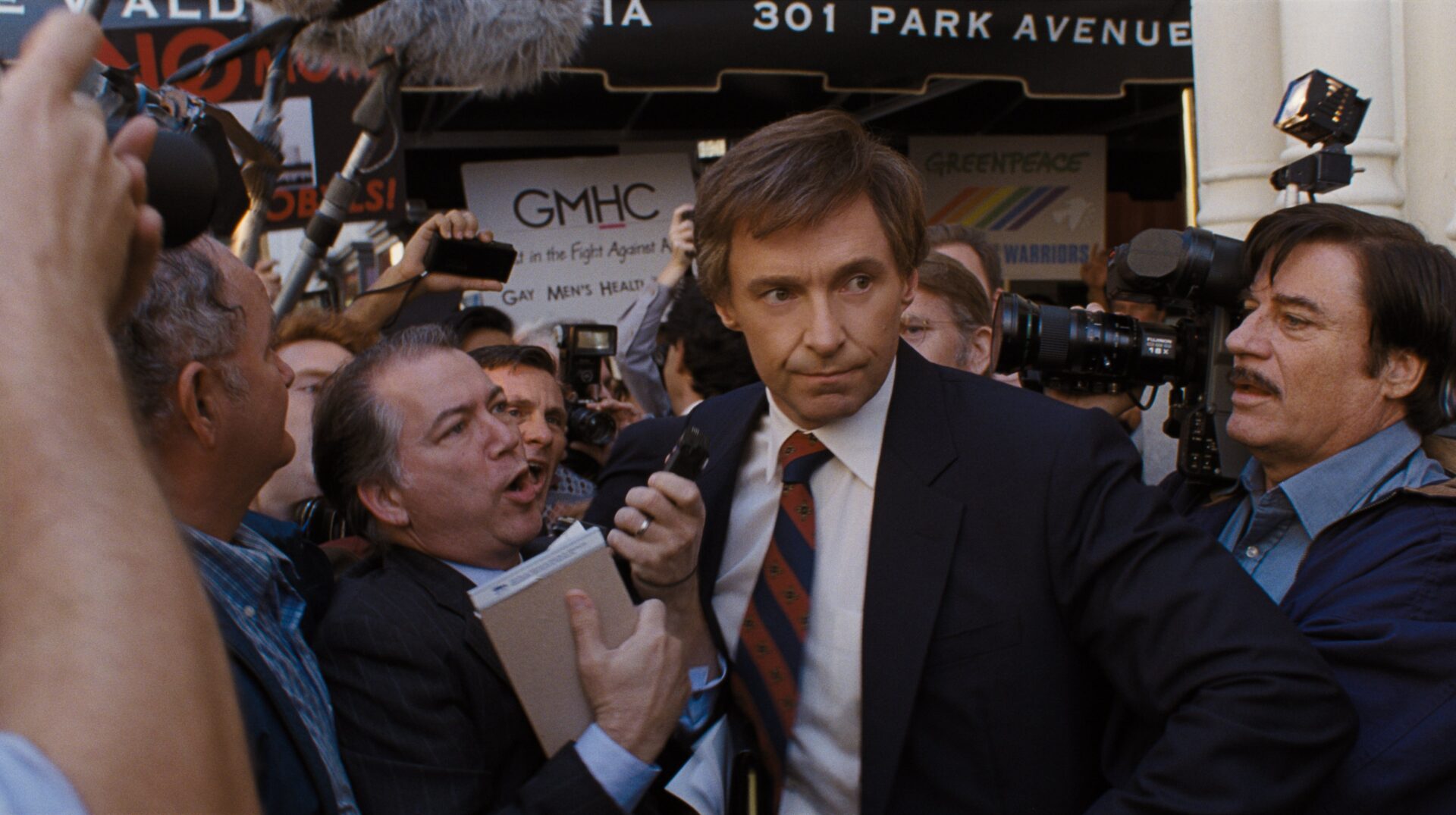 Jason Reitman’s The Front Runner opens with an Altmanesque long take that weaves through a massive crowd of reporters, political strategists, and campaign workers as they discuss the intricacies of the 1984 Democratic primary just prior to Gary Hart (Hugh Jackman) conceding to Walter Mondale. Between the roving camerawork and overlapping dialogue, the film promises a prismatic view of American political campaigning. But as soon as it jumps ahead to 1988, with Hart standing as the clear Democratic frontrunner in the upcoming presidential election, the film quickly reveals that the only angle it’s interested in is the one that most sympathizes with the Colorado senator.

Hart may have been a womanizer, but the filmmakers make no bones about their support of his belief in the sanctity of privacy for public servants, presenting Hart not as a victim of his own libido, but of an increasingly ruthless and combative press. When Ben Bradlee (Alfred Molina), executive editor of The Washington Post, later recalls President Lyndon B. Johnson telling a handful of elite reporters that lots of women will be entering and leaving his hotel room and that he expects the same courtesy of privacy given to President John F. Kennedy, one senses that Reitman and co-writers Matt Bai and Jay Carson are mourning the pre-#MeToo era when the path for Great Men was unimpeded by outspoken women and intrepid reporters.

Hart’s infidelity, poor judgment, and unwillingness to navigate a rapidly shifting media landscape are all glossed over in favor of highlighting him as the charismatic beacon of light primed to rejuvenate a waning Democratic Party near the end of Ronald Reagan’s presidency. Instead of plumbing the complexities and contradictions of Hart’s character, the film doubles down on its seething contempt for the press and their increasingly invasive tactics. Indeed, The Front Runner portrays Tom Fielder (Steve Zissis) and Pete Murphy (Bill Burr), two reporters from the Miami Herald, as second-rate gumshoes, reducing them to scheming rats as they scurry through back alleys late at night in order to accost Hart and barrage him with questions of his marital infidelity with his mistress, Donna Rice (Sara Paxton).

Reitman does eventually pay lip service to the two women most adversely affected by Hart’s affair: Donna and Hart’s wife, Lee (Vera Farmiga). But in both cases, the endless hounding of intrusive reporters takes the brunt of the film’s criticism. While Donna is over-protective of Hart and simply wants for Hart’s campaign manager, Bill Dixon (J.K. Simmons), to let her go home, Lee and her daughter, Andrea (Kaitlyn Dever), are surrounded in their home by desperate reporters who circle like sharks. Though Hart’s irresponsible behavior plays a large part in both women’s suffering, the film can’t help but repeatedly shift the blame away from Hart, who’s primarily seen as calm, resolute, and just in the face of relentless, unfair invasions of his privacy.

Lee ultimately gets in a few digs at her husband, telling him that he should feel stupid and embarrassed by his behavior, but these insults land as soft slaps on Hart’s wrist before Lee and, by extension, The Front Runner return to chastising the press and putting the bulk of the blame for the senator’s crumbling campaign on them. The sole line of on-screen text after the film fades to black—“Gary and Lee Hart remain married to this day”—seems to suggest that none of Hart’s private blunders should ever have become public knowledge simply because Lee eventually forgave him.

But what’s even more egregious than The Front Runner’s contention that the private lives of powerful men be left shrouded in secrecy is the smarmy manner in which it treats any character who stands against Hart. Particularly stomach-churning is a scene where Washington Post reporter Ann Devroy (Ari Graynor), already portrayed as a ruthless feminist wanting to take down a good man merely for his serial cheating and refusal to cop to it, tells fellow reporter A.J. Parker (Mamoudou Athie) that she simply doesn’t trust Hart anymore. It’s a reasonable statement, yet Parker, who played no small part in initiating Hart’s downfall, reacts as if she’s insane for supporting the Washington Post’s continued coverage of Hart’s affair.

That the filmmakers thought the 2018 midterm election season was the perfect time to air their grievances about the unfair treatment of an influential white man, especially one with a history of questionable treatment toward women, only solidifies the misguided nature of The Front Runner. Reitman, Bai, and Carson seem to think that Hart’s personal life should have been off the table because he was a genuinely promising politician whose liberal policies may have helped to keep us out of the mess we find ourselves in now. But in an era rife with Trumps and Kavanaughs, it wreaks a bit of hypocrisy, misogyny, and privilege to plead that the press stick to policy, thus providing a voice only to those already in positions of power.