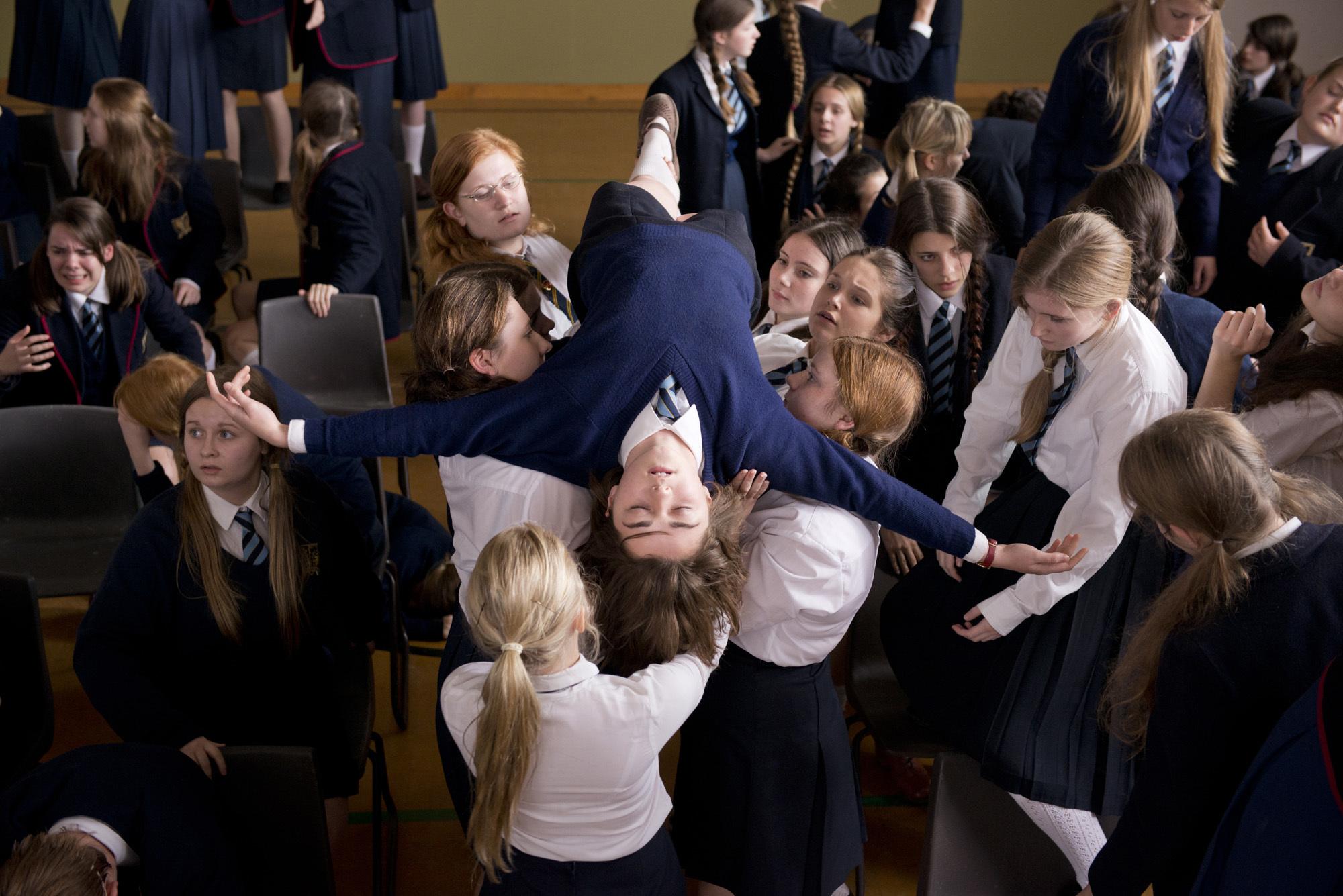 Set in a boarding school, centered around a close friendship between two teenage girls, and featuring an oddly dreamy revolt against adult authority figures, The Falling evokes trippy classics like Picnic at Hanging Rock and Heavenly Creatures. But while cinematographer Agnes Godard’s lingering close-ups of emotion-charged faces, evocative shots of trees and water, and quick cuts to disturbing abstract imagery create an intensely emotional, sometimes vertiginous tone that mirrors the girls’ inner lives, the script is less assured. It starts out strong, as the watchful, brooding Lydia (Maisie Williams) shadows her adored best friend, Abbie (Florence Pugh), a lively and charismatic beauty. The two have the kind of boundary-dissolving, semi-romantic bond that adolescent girls often have with their besties, but Abbie is starting to move into the world of sex with boys, leaving Lydia feeling angry and abandoned. Then Lydia loses Abbie altogether, in a development as baffling as it is tragic, and Lydia’s moodiness and alienation blow up, making her act out in ways that affect the whole school.

Perhaps trying to keep her lost friendship alive, Lydia starts to mimic things Abbie used to do, including the fainting spells she had been having in class. Fainting turns out to be a highly effective way of escaping the torpor and tyranny of a 1960s English boarding school, and other girls soon follow suit. Like speaking in tongues, the girls’ swooning appears to be at once a learned behavior and a genuinely felt, perhaps even spiritual, experience. “It was this…feeling,” one girl says of a fall. “I don’t remember anything before or after.” But the more tedious things get for the girls, the faster their bodies hit the ground. And when a member of the local Women’s Circle gives a lecture on Accidents in the Home, they stagger from their seats and drop to the ground in the aisle en masse, in a kind of passive-aggressive rebellion.

That promising premise peters out after Lydia renounces her fainting spells, leaving unexplored her half-baked rebellion and the mystery of why the other girls, almost none of whom develop a distinctive personality over the course of the film, joined in. Instead, the focus shifts to Lydia’s dysfunctional home life. Her relationship with her brother (Joe Cole) is turning incestuous—another way of keeping her friend’s memory alive, since Abbie had sex with him once—and her lifelong rage at her frozen, agoraphobic mother (Maxine Peake) is coming to a boil. It all leads to a melodramatic climax that wraps up Lydia’s explosive acting out in a too-neat package.

As such, The Falling can feel oppressively on the nose, as in another scene where a teacher relays a psychologist’s verdict of “hysterical contagion” and then provides the definition of “hysteria,” explaining that the Greeks believed in the destructive power of “the disordered womb.” Still, there’s power in its poetry. No words are either needed or provided when the camera lingers on the frustrated isolation of disempowered middle-aged women like Lydia’s hated mother or a universally scorned teacher, or when it shows girls dropping to the ground and twitching while a heartfelt acoustic song swells on the soundtrack. And if the other girls are underdeveloped as characters, close-ups of several girls’ annoyed, intimidated, or coldly contemptuous faces as the silky-voiced male psychologist quizzes them about their actions suggests the roiling cauldron of conflicted emotions and inchoate anger that probably motivated their weird, wordless rebellion.