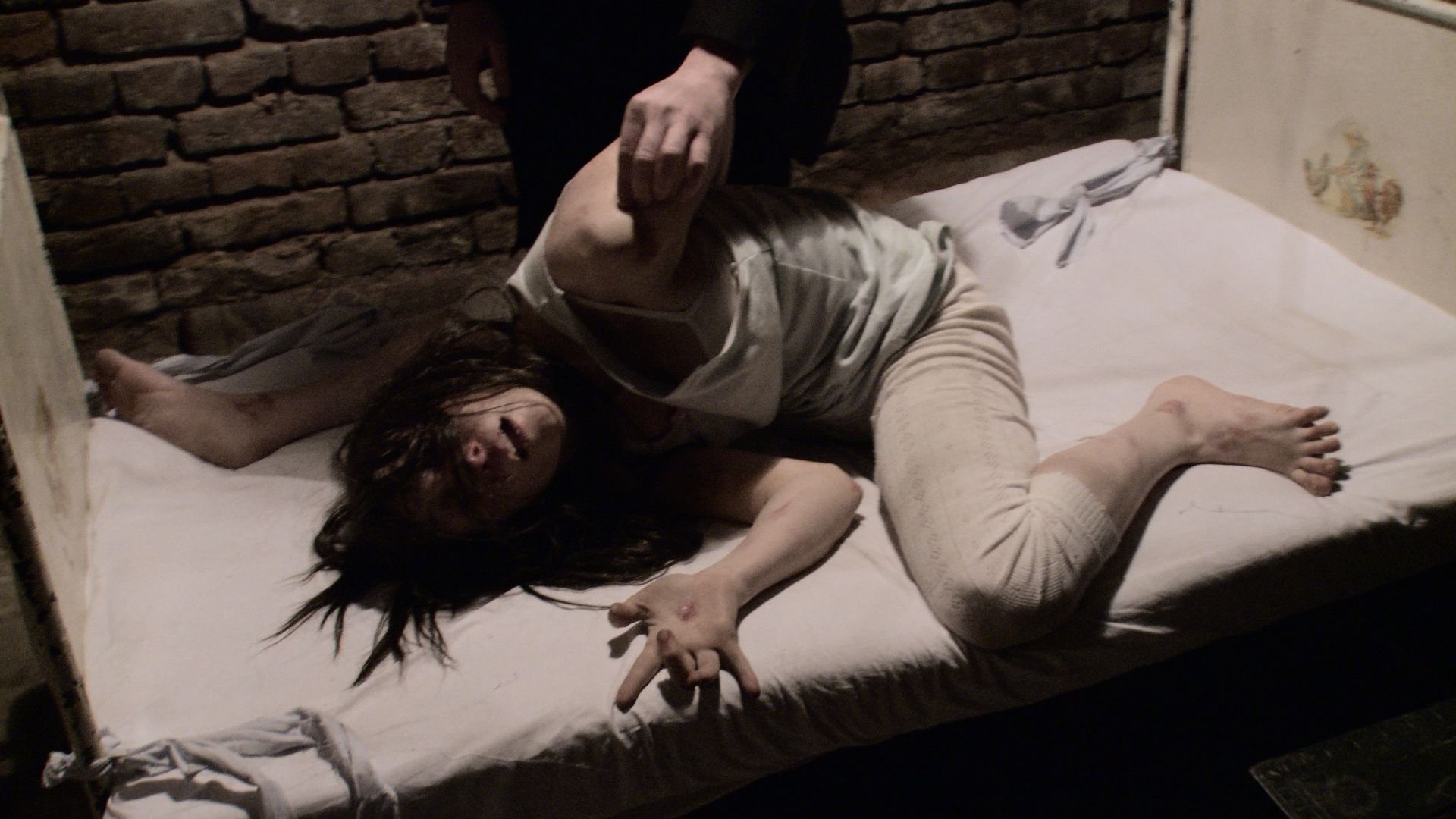 It’s also an unintentional nod to the first fundamental faux pas of this klutzy bamboozler, directed and co-written with senseless audacity by William Brent Bell (Stay Alive). Bell’s cuts are connected with the formal intuition of a filmmaker possessed by Ed Wood, as every abrupt jump that aims for dramatic intensity begets comedy instead—or merely points to a puerile grasp of continuity. The common scenario involves film-within-film footage of over-the-top possession victims curtly juxtaposed with reaction shots from onlooking characters, whose soap-opera-serious expressions couldn’t be further from those of The Devil Inside’s actual audience (what’s unwittingly created is the kind of awkward, how-about-that humor often seen in one-camera sitcoms). Bell doesn’t mean to be in the business of jokes, but his film is a big one, and it’s most certainly at the viewer’s expense. The final cliffhanging splice, which will enrage every last adrenaline junkie who simply pays for cheap thrills, is a rug-pull of the laziest and most insulting sort, exposing the film as a kind of shameless media experiment while, by the bye, confirming that it’s got plot holes like stigmata.

Comprehensively derivative, The Devil Inside fills the Annual Exorcism Movie slot, attempts to serve found-footage realness, goes to elaborately futile lengths to support its subject’s “authenticity,” and presumptuously designs itself for a viewership of suckers inundated with challenge-free reality television. Opting to take part in a supposed friend’s (Ionut Grama) otherwise unexplained documentary because she fears for her sanity and “has to know what really happened” during her mother’s crime (recounted in vintage news footage that muddies this whole operation’s authorship), Isabella, touring a Roman exorcism school, conveniently recaps each scene for the handheld, exposition-hungry camera before offering nighttime confessionals that assure you of her every banal emotion. Quite slow on the uptake, Isabella, whom Andrade plays as convincingly as JWoww anchoring 60 Minutes, is a modern 24-year-old who has to be told by a pair of rogue priests that upside-down crosses are signs of Beelzebub, and whose response to the priest’s plainly ominous recommendation that she “truly understand” exorcisms is, “So, more classes?”

The film’s contradictory and nullifying dilemma of wanting to be both scripted and vérité at once, a plight that affects so much contemporary TV, is temporarily quelled in heated scenes of curse-laden levitation and Linda Blair contortion, which dutifully deliver the scares. Proving there’s such a thing as the poor man’s Melissa Leo, Crowley is a hoot of a force in all her white-trash theatrics, her bloodshot, dilated eyes emitting true grotesquery. And a random Italian victim (Bonnie Morgan), who quickly turns a murky basement into a crime scene, creeps out good as she dislocates her shoulders, leaks menstrual blood, and all but breaks her spine as the devil takes hold.

But never are you really invested in any of this, as the film is pervaded by lead-footed artificiality and the growing stink of crass marketing. Isabella and her voyeuristic companion hit the requisite, bogus snags of justifying continued filming (“Get the other camera; we need the light!”), while one of the priests (Evan Helmuth) is so bumblingly, unironically earnest he suggests a sketch character cooked up by The Onion. Most vexing is the film’s apparent construction as a wanton ploy to send consumers on a useless commercial goose chase. Outwardly, the highly advertised, hollowly provocative insistence that the Vatican “did not endorse this film” doesn’t seem to be a problem of the film itself, but The Devil Inside is intrinsically manipulative, and, most embarrassingly, not the least bit persuasive. Its affront to the Catholic church is merely a transparent beard for the nonsense it’s peddling.

A Half-Baked Puppet Show: Rupert Wyatt’s Rise of the Planet of the Apes