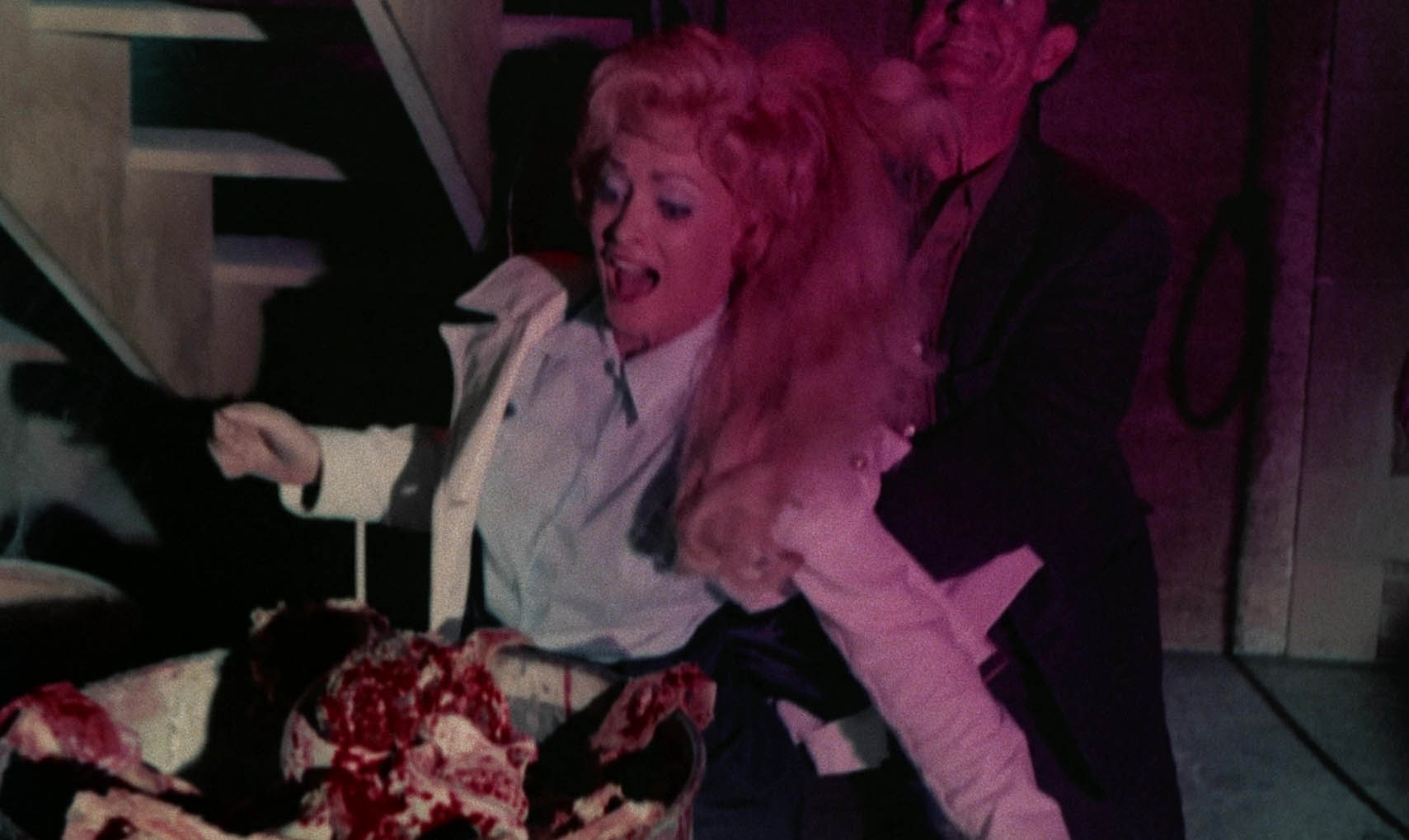 Make no mistake, there is nothing in Ted V. Mikels’s infamous grindhouse cheapie The Corpse Grinders even a fraction as disturbing as the graphic art of its promotional one-sheet: a screaming, bikini-clad girl being shoved by a hairy, ape-like arm into a machine filled with grinding, jagged gears…the girl already half-devoured by the hideous contraption’s metal teeth but still obviously fighting for what few seconds of her life she can still salvage, despite the drawing’s none too subtle implication that her vagina is just at the cusp of being mangled…ugh, I have to stop before I drive myself insane! Though there are no live torsos pulverized to mush in the film proper (only corpses, as per the title), there is an unmistakable misogynistic bent, even while the corny ground beef special effects are more likely to elicit hysterical laughter in contemporary viewers. The woman-hating comes from both fronts: literal, with each scene after mundane scene portraying women as secretaries, girlfriends, and soap opera-watching loafers, as well as metaphoric. The corpse-grinding machine, as it turns out, is the brainchild of a cat food entrepreneur who comes to the realization that by processing bodies from the local cemetery he can turn out product for, ahem, dirt cheap. Problem is, once the city’s cats have developed a taste for human flesh, they don’t tend to wait around for their next meal to actually die. Consequently, every few scenes some poor, put-upon dude will inevitably find himself suddenly caught in the eye of a hurricane of batshit-senseless, pouncing pussies, an image that’s always good for a cheap laugh (see Dario Argento’s Inferno or Milhouse’s treehouse magic show) but one that here, in light of all the shots of shapely female bodies being strapped to a conveyor belt into the mouth of a meat processor, becomes a faux-Freudian representation of the director’s mistrust of the weaker (oops, he means “gentler”) sex once they form a pack. It’s hardly surprising to learn that Mikels was a practicing polygamist.