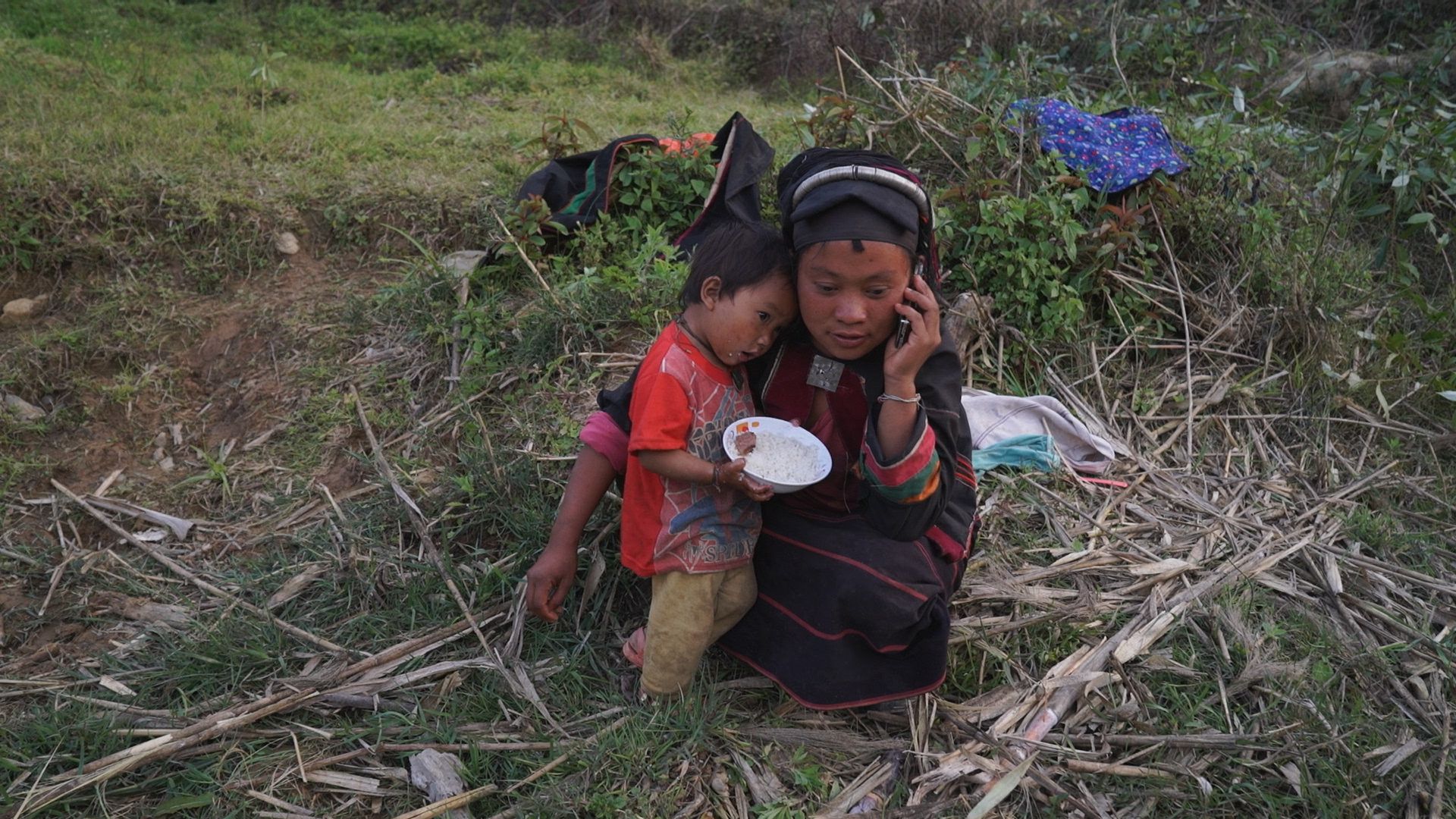 Wang Bing’s films are known for their proximity to their subjects. They often home in on broken institutions in his native China and sympathetically document how they ravage the individual. His art is both thematic, investigating capital-S social conditions, and specific to time and place.

Neatly fitting within that trajectory, Ta’ang concerns itself with the lives of refugees living in China. After a few lines of text describing the forced displacement caused by an ongoing civil war in Myanmar, Ta’ang opens in media res in the Maidihe refugee camp in Yunnan, China. Here, four thousand Ta’ang and Dai men and women, Burmese ethnic minorities, are living in uncertainty as to when they can return home. Moving from Maidihe to other camps and villages in the Sino-Myanmar border region, Ta’ang intimately follows several refugee families and communities over four days and three nights in their ceaseless forced movement. With a plodding rhythm matching its subjects’ indefinite trek, the film hews itself to the physical and emotional labor of their situation: childcare, cooking, working fields, waiting.

Wang’s 2013 film Till Madness Do Us Part, about life inside a Chinese mental institution, reveals that his style can veer into exploitation. If Ta’ang feels genuinely humanistic, it’s because of its abiding respect for the lives it follows. Wang treats his subjects, suffering though they are, with sympathetic dignity. The film follows these refugees closely but with a physical and narrative distance that respects their independence. In fact, these men and women guide much of the story, only incidentally revealing the personal details that make it so moving in the course of their work and worries.

Wang is a cinematographer by training and his camera suggests the eye of a person thrust into the situation faced by the film’s subjects. Observing with guarded intimacy, it’s present but doesn’t impose itself. The camera stands, often at eye level, almost merged with the scene, rapidly pivoting to grasp the movements of men, women, and children busily flowing around it. Wang’s practiced intimacy offers space to sympathize without feeling overly intrusive. It’s hard not to be in awe of the subtlety with which he shoots the human face. Filled with extended close ups, Ta’ang’s devotion to the varied visages it encounters is silent-film-like in its pathos. From its human perspective, Wang’s camera hovers on faces so as to capture the minute yet profoundly affecting emotions and uncertainties that flit across them.

While about half its scenes play out during the day (delicate cuts use the slow movement of the sun to track the dire passage of time), the film’s heart is in the night. Clashing orange and blue electric lights look almost mythic in their sparring as women, exhausted to the point of giving up, share stories with each other. Communal fires offer a source of light and life for a group on the precipice of dissolution. One of those fires, around which men and women share their memories of flight from home, suggests the last place on Earth; in long takes, devastating tales of war pour out of the mouths of individuals whose faces are lit by the dancing orange glow of the flame. The community-shattering destruction they discuss feels almost countered by this act of sharing. A candle lighting another scene is kept from extinguishing only by a careful hand—precarity and tenderness in a single gesture.

Ta’ang can be heartbreaking in its spare descriptiveness. Its careful structure is also highly evocative. Many formally interesting documentaries—really any that don’t have an argument—are praised for asking questions they won’t pretend to answer, but such generic concerns feel foreign to Ta’ang. Wang takes the injustice in forced displacement as axiomatic. There’s nothing to think through, no cause, and no position defended. Ta’ang refuses to transcend the conditions it records, save in the spare text indicating which camp is being filmed and the black space that sandwiches it. There’s always a hazard in immersion, the gutless danger of identification without self-reflection, but it works. Ta’ang’s formalism offers a murky—but perhaps no more than that—sense of the uncertainty of refugee life, where the future is experienced as nothing if not indefinite delay.