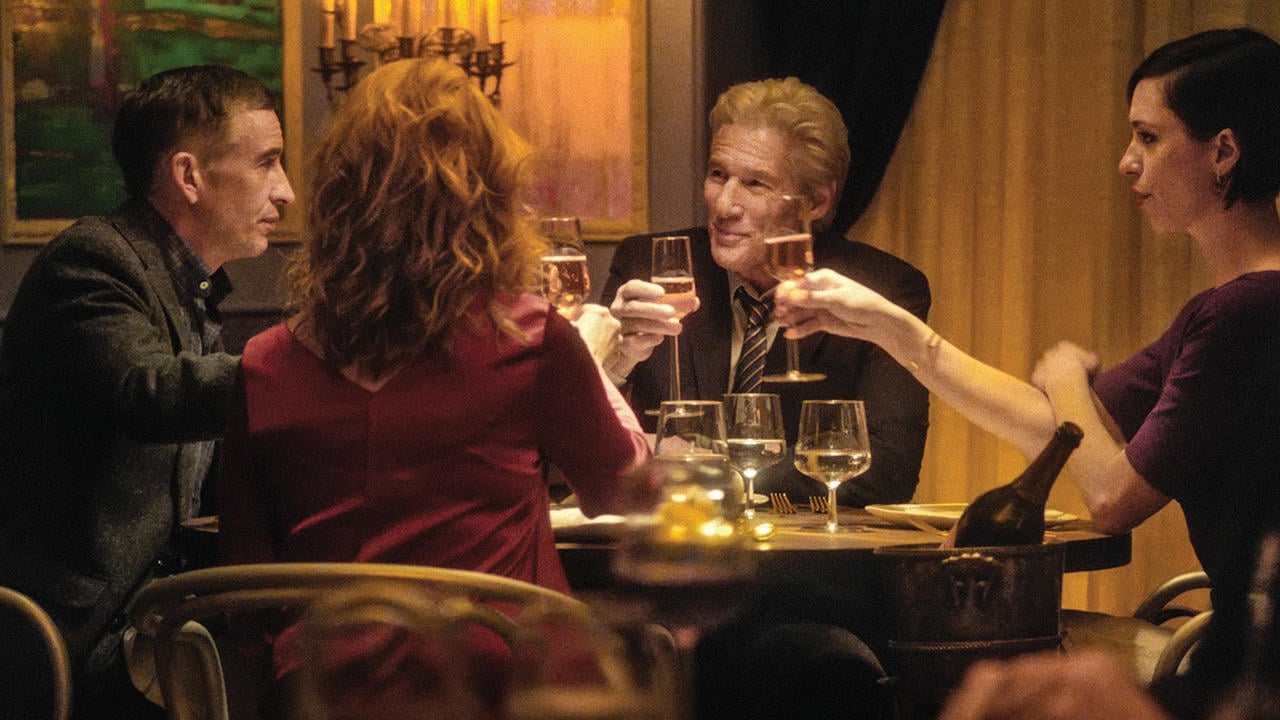 Based on a novel by Herman Koch, Oren Moverman’s The Dinner is a film of this moment of American macro nihilism. Each character is less a dramatic creation than a variable in a mathematical equation designed to calculate how modern language is used to satisfy Orwellian functions of distancing and branding. At one point in the film, a ruthless murder is called an “unfortunate chain of events”—an evasive euphemism that’s familiar to politicians, who understand that words create reality. The identities of the four principal characters have been conceived so as to reflect an elemental conflict of idealism and pragmatism, as the two men at the center of the narrative are a former public school teacher, Paul Lohman (Steve Coogan), and his rich and polished congressman brother, Stan (Richard Gere). Paul and Stan have dinner together along with their respective wives, Claire (Laura Linney) and Katelyn (Rebecca Hall), attempting to locate the nexus of privileged American evil.

The Dinner is set over the course of this very long meal, in which presumably left-leaning intellectuals eat food that costs thousands of dollars—enough to improve the lives of people about whom they presume to care. This irony immediately crushes the life out of the film, giving it the tenor of a smug sermon. Worse, the narrative often emphasizes the point of view of Paul, another of Coogan’s insufferable know-it-alls, who actually calls himself a “warrior of the underclass” without a trace of self-awareness. Moverman and Coogan know that Paul’s a fraud, and he’s gradually revealed to have significant mental problems and issues of latent racism, but we’re still watching the actor in another of his mono-tonally editorializing performances—literally, in this case, as Coogan assumes an American accent that further flattens him out. Claire and Katelyn, meanwhile, are unsurprising Lady Macbeth types: vipers who believe the ends to justify the means.

The film’s one good, if self-conscious, joke is that Stan, the smooth operator working on an amendment to the Affordable Care Act while riding in his fabulous limo, is the idealist of the group, rather than Paul, the presumed aspiring artist and intellectual, or the type that’s typically utilized by pop culture as an avatar of liberal decency. Gere walks away with The Dinner, though he has an advantage over his co-stars, as Stan is the only character who’s allowed to exhibit detectable elements of human decency, regarding the film’s big reveal with the gravity and outrage it unambiguously warrants.

The family has assembled to discuss Paul and Claire’s son, Michael (Charlie Plummer), and Stan’s son, Rick (Seamus Davey-Fitzpatrick), who’ve done something so unforgivably disgusting that it intentionally pulls the viewer out of the film. It’s gradually shown that Michael and Rick happened upon a black homeless woman sleeping in an ATM booth, pummeled her with trash, and set her on fire with matches and burned her to death, all while laughing over her screaming body and filming it for a YouTube video. This uncompromisingly nasty scene is Moverman’s way of illustrating his stereotypically cautionary view of the callousness of millennials, whose souls are seen by the film as being killed by modern social technology, and this association is extended to the adults when Katelyn is seen coldly scrolling through her phone after talking of the murder, attempting to emotionally blackmail Stan into acquiescing to the group’s determined moral relativity. (The revelation of the killing, while shocking, also yields a howler: Why is this family, particularly the family of a politician, discussing this act of psychopathy in public? It’s a detail that’s intended, no doubt, as another wrinkle of satire.)

The murder of the nameless woman has representational implications, as she’s a member of the portion of the populace that’s casually and unobtrusively harmed when, say, funding from social programs is cut to grant corporations more tax breaks, which politicians justify with morally and intellectually unfounded celebrations of rebranded trickle-down economics—a kind of harm that’s rendered nearly beside the point by the endless, distracting saber-rattling of the culture wars. The murder in this film is similarly sanitized with rhetoric. Stan’s poignantly appalled and feels that the children should face the full brunt of the law, but the wives justify the death with class resentment and entitlement. Parallel to this argument, Paul stews in memories of how Stan helped him through his mental illness, somehow summoning nothing for his brother but contempt.

The Dinner is shrilly, luridly, dully, and unremittingly ugly, preaching to a choir that it also demonizes. Michael and Rick’s evil is supposed to connect somehow with Paul’s insanity, suggesting that this family’s history of illness serves as a synecdoche of the immorality and hypocrisy of the American experiment—a notion that’s not quite coherently underlined by a long and rambling flashback to Paul’s obsession with Gettysburg. The film’s obviousness is compounded by its aesthetic, which abounds in rarefied noir lighting that paints the restaurant setting as a realm of the damned and damnable. Moverman is a talented and ambitious director, but he’s fallen prey here to thesis filmmaking of the most reductive order.

Interview: Azazel Jacobs on The Lovers, Debra Winger, and More