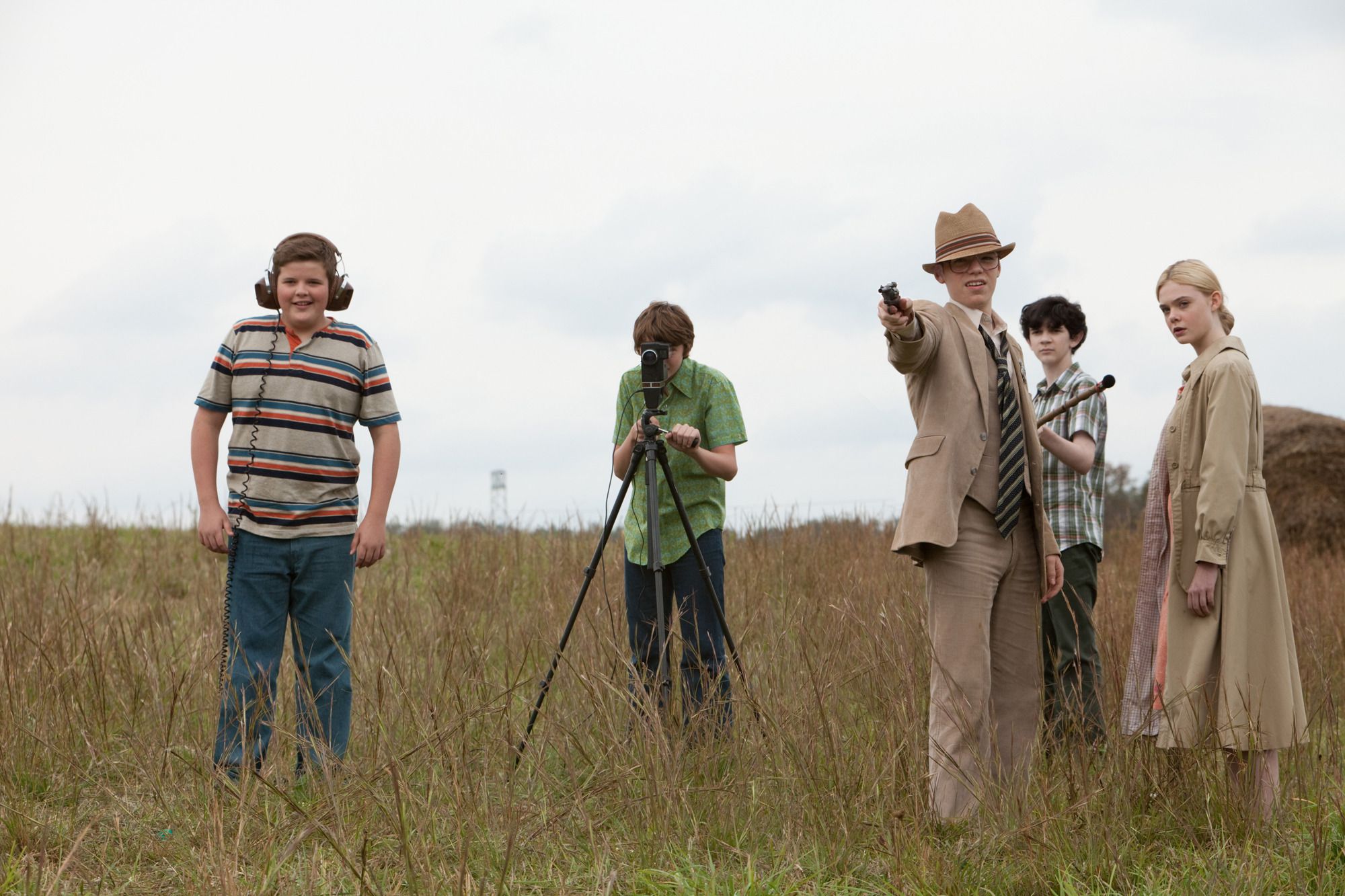 J.J. Abrams imitates to flatter with Super 8, an homage to the seminal science fiction films of Steven Spielberg that succumbs to empty nostalgic pandering. As with his Star Trek, Abrams’s latest puts a modern spin on classical material, though here reinvention isn’t the goal so much as slavish duplication embellished with muscular CG effects. It’s akin to returning to a cinematic womb of Spielbergian father-son issues, suburban households under extraterrestrial strain, and teen romance, friendship, and maturation via out-of-this-world circumstances. The effect of such a modus operandi is initial coziness quickly giving way to disheartening familiarity, with Abrams’s own preoccupations (if he had any to begin with) becoming subsumed beneath the root themes, dynamics, and imagery of Close Encounters of the Third Kind and, more fundamental still, E.T. Set in a small Ohio town in 1979, this is a trial-by-fire tale of middle school kids falling in love, strengthening relationships, and reconciling with distant parents that’s so clearly modeled after the work of its spiritual godfather (and producer) that, though Abrams’s comprehension of his chosen genre tropes is exhaustive and his technical skill is impressive enough to create stirring atmospheric déjà vu, there’s little genuine heart to his drama. Instead, in a manner similar to Gus Van Sant’s Psycho, it’s merely a high-resolution photocopy devoid of its revered predecessors’ soul.

After a four-months-prior funereal prologue, Abrams’s story finds wannabe creature-feature makeup artist Joe (Joel Courtney) still reeling from the accidental death of his mom, which has left him in the custody of father Jack (Kyle Chandler), a police deputy who—as evidenced by his suggestion that Joe attend baseball camp—neither knows nor cares to understand his son. Joe embarks on summer vacation intent on making a zombie movie with portly friend and budding auteur Charles (Riley Griffiths), whose hectic, sibling-overloaded home blatantly strives to recall the residence of E.T.’s Elliott, whom bike-riding Joe also deliberately resembles. Filming at an abandoned train station late one night with new cast member and fetching Erika Eleniak look-alike Alice (Elle Fanning), the production crew winds up running for their lives once a speeding locomotive is deliberately derailed—leading to fierce computerized calamity—by the truck of their middle school biology teacher. Soon, the Air Force, led by Nelec (Noah Emmerich), is on the scene and canvassing the town, casting evil military-men shadows while searching for a monster that, as later events reveal, has scared away all local canines and is intent on collecting the area’s every electronic and mechanical device, thus causing mysterious power outages.

Abrams keeps this beast off screen for as long as he possibly can, to the point that Super 8—reminiscent of Cloverfield (which he produced)—becomes something of a giant tease. The idea, naturally, is to generate tension from fear of the unknown, and the director does scrape up minor suspense from a few quiet-quieter-silent-LOUD scenes in which only a flurry of gargantuan limbs can be spied. Moreover, this strategy pays early dividends simply because it allows more time to be spent on Joe and his friends, whom Abrams delineates with quick, clear strokes, as well as Joe’s growing bond with Alice, whose drunken father Louis (Ron Eldard) was unwittingly responsible for Joe’s mom’s death, and whom Fanning embodies with a mixture of intimidating radiance and deep humanism. A fantasy vision of female perfection, Fanning’s Alice meshes nicely with Joe, a somewhat withdrawn kid nonetheless unashamed to show his dream girl his collection of hand-constructed models. And Super 8 works best when simply lingering in their presence, allowing them to produce a flicker of sincere yearning, fear, excitement and mournful sadness that Abrams’s overt attempts at Spielbergian melodrama can’t muster, as when the young couple watch a mawkish home movie of Joe and his mom.

Joe and Alice’s chaste romance is a vehicle for healing and reconciliation between both kids and fathers, as well as single men alienated by grief and resentment. However, save for one tense exchange between Joe and his dad in which a comment about responsibility resounds with multiple implications, this thread is thinly sketched by the script, which is more interested in checking off items on a Spielberg to-do list than grappling with authentic sentiments. That’s also true with regard to the guiding theme about moving forward by letting go of the past, an ironic notion for this backward-looking film, and one that—spoiler alert—extends to the many-limbed creature itself, another government-abused E.T. who’s desperate to return home. Even the alien’s motivation is told rather than dramatized, leaving the third act in a shambles, brimming with zooms into close-up and vistas of otherworldly chaos that can’t compensate for the schematism of the finale’s Alice-as-Faye-Wray plotting. All the while, Abrams’s aesthetic mode—be it Michael Giacchino’s John Williams-ish score or the director’s trademark lens flares, which inconsistently heighten emotions (via streaks across eyes)—proves at once proficient and secondhand. Only George A. Romero disciple Charles seems alight with original life, cheerfully reflecting Abrams’s (and the film’s) youthful cinema love. Yet incapable of transcending its go-nowhere nostalgia, Super 8 ultimately feels stuck in a state of suspended supernatural-sci-fi adolescence.

Review: Judy Moody and the Not Bummer Summer