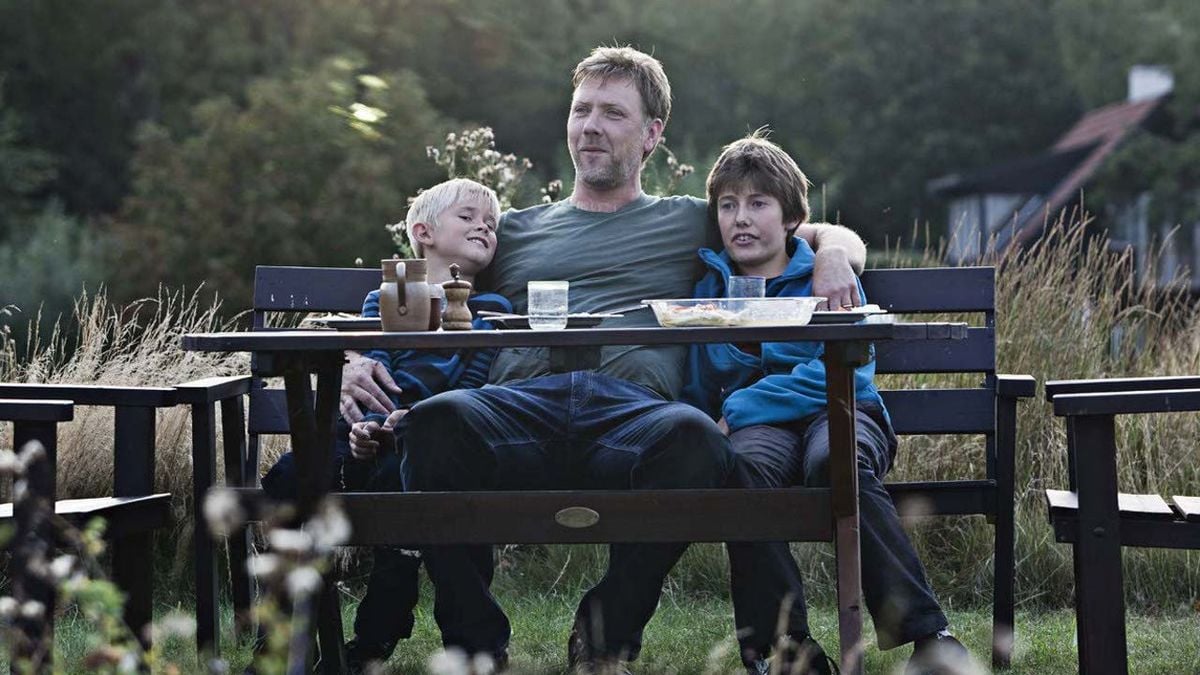 Susanne Bier’s In a Better World concerns itself with a thicket of mature moral questions, only to resolve them in the most glib and banal means possible. Working from a script she co-wrote with Anders Thomas Jensen, and following up her superior Things We Lost in the Fire, the Danish director opens her latest with the clichéd sight of young African children chasing after a truck carrying a white man—in this case, Anton (Mikael Persbrandt), a doctor who regularly visits Kenya to treat the sick, leaving behind the wife, Marianne (Trine Dyrholm), from whom he’s now separated, and the son, Elias (Markus Rygaard), whose need for a full-time father figure is epitomized by the constant punishment he receives from bullies at school. Meanwhile, in a concurrent strand that soon dovetails with the aforementioned tale, young Christian (William Jøhnk Juels Nielsen) moves to town after the death of his mother, which has left him estranged from his father, Claus (Ulrich Thomsen), and furious at the world. It’s an anger that—after he spies the bucktoothed Elias being taunted at school as “rat face”—he expresses by viciously confronting Elias’s tormentor and, later still, by concocting an explosive scheme to punish a belligerent auto mechanic who publicly slaps Anton around.

Bier’s actors are uniformly solid, and her cinematographic penchant for suddenly zooming toward or away from her characters’ pained faces heightens the action’s emotional jaggedness. Nonetheless, Bier’s overriding approach is to establish thorny internal and external scenarios, and then wrap them up with punishing phoniness. This is true throughout, though most piercingly in evidence with regard to Christian. The boy’s fury at his father—born from the belief that the man is a liar (because he said his mother would survive cancer), and that he wanted his wife to die (though in reality, he wanted her to stop suffering, as well as to stop being so nasty to him)—has its own sort of irrational rationality. Rather than plumbing that dynamic, however, In a Better World focuses far more intently on the question of whether violence begets more violence, and if turning the other cheek is the most productive approach to abuse. The former tack gains traction when Christian neutralizes the thug bothering Elias with a knifepoint threat (in an implausible later shot, they’re even spied as being on friendly terms!), and comes to a head with his plans to make a homemade pipe bomb; the latter is argued by Anton, whose refusal to respond to his own adversary’s blows is a Christ-like lesson ignored by his kid.

As aggression is, at least initially, shown to both quell and perpetuate more aggression, the film seems primed to delve into the murky gray areas of its chosen theme. Alas, such hopes are dashed, especially once Anton’s Kenya-set subplot pits him against a monstrous racial caricature known as Big Man—his left eye milky-white, his gashed leg filled with maggots, and his mouth prone to praising female mutilation, murder, and necrophilia—whom Anton handles in a manner that contradicts his own stated morality, and yet seems to have no further bearing on his character. Like so many of In a Better World’s players, Anton exhibits multifaceted motivations and makes conflicting decisions, but the material treats these elements as inconsequential to the overriding narrative or emotional/psychological/class dilemmas at hand, since Bier is determined to conclude her schematically plotted story on a simplistically heartening “Make love, not war” note (including with regards to Anton’s faltering marriage) even if it resounds as laughably crude and hollow. Which it most certainly does. Between its raft of daddy-abandonment issues and menacing bullies that are easily dealt with via some peace, love and understanding, and its utilization of Africa as merely an exotic venue whose conflicts reflect the primary Western European-situated drama, Bier’s film hits so many false notes that it proves only an exercise in shrill reductiveness.