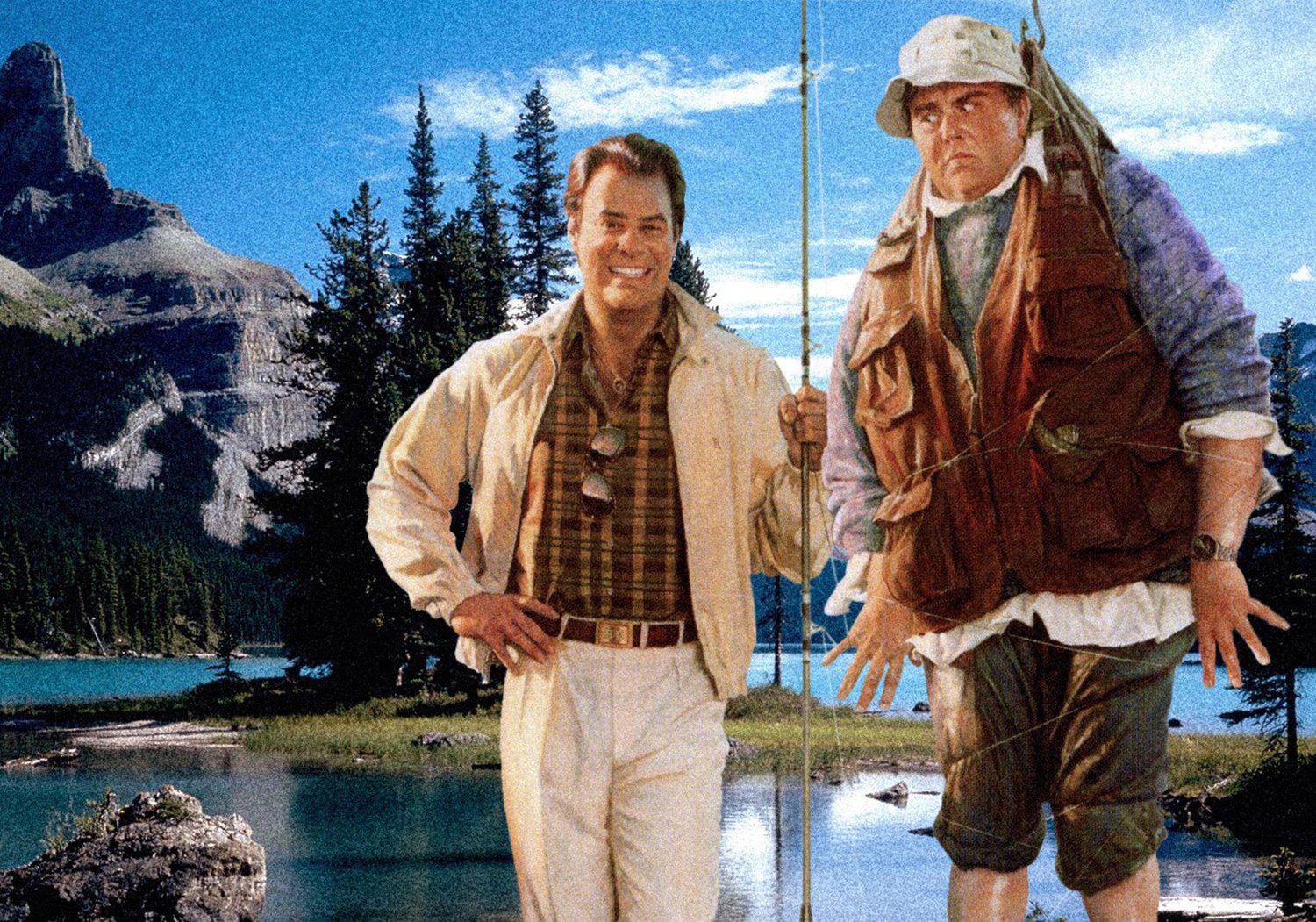 Howard Deutch’s The Great Outdoors is a film about manufactured nostalgia, bordering on revisionism, bordering on delusion. All-American any-dad Chet Ripley (the all-Canadian John Candy) drags his family to a rustic lake resort in Wisconsin for an extended summer holiday. He’s attempting to reconnect with nature while double-knotting the familial ties already apparent in the opening scene, which has the Ripley clan (rounded out by mom Stephanie Faracy and kids Chris Young and Ian Giatti) all singing along to the Coasters’ “Yakety Yak” in the family station wagon.

From its earliest scenes, the film makes the disconnect between Chet’s memory of the North Woods and its reality apparent. “Woah-ho! Trees in the parking lot!” he exclaims, over-eagerly, as the family struggles to make it out of their car on arrival, boxed in by overgrown pines. The bucolic cabins have slipped into disrepair, despite the resort’s proprietor (Robert Prosky) having sunk in several hundred dollars in renovations (“not including the Lysol”). Raccoons terrorize the grounds, rooting through trash, their chattering subtitled for the viewer’s benefit. Worse, Chet’s obnoxious day-trader brother-in-law, Roman (Dan Aykroyd), and his family arrive unannounced to encroach on the Ripley’s peace and quiet. But Chet’s determined to make the best of this, resolved to harmonize his idea of the perfect family vacation with the niggling reality.

Revisiting, and enjoying, The Great Outdoors requires just a bit of this same misty cognitive transposing. By any reasoned critical metric, the movie’s a bit of a mess. It’s smorgasborded, something-for-everyone approach to film comedy may represent an era when movies weren’t so exactingly focused-grouped, or when the gross-out humor of The Hangover hadn’t come to totally define the comedy landscape. The film presents the elasticity of late-‘80s PG cinema, where a supposedly “family-friendly” comedy still flirted with sexuality and adult themes (like trading-floor fraud). Screenwriter John Hughes applies his talent as master chronicler of suburban teendom to an almost hilarious compressed subplot involving Buck Ripley (Young) and a guarded love interest (Lucy Deakins) native to the small vacation town. They fall in love, becoming “officially” boyfriend and girlfriend in what seems like two days. There’s also all the cheesy raccoon-talk stuff, and the late-game horror-movie turn. Taken together, The Great Outdoors feels like a patchwork of individual gags, made for every audience and no particular audience all at once.

But like the film’s run-down lake house, all it takes is a little emotional elbow grease to restore The Great Outdoors to its pseudo-splendor. Call it the Lysol of memory. For members of a certain generation, and especially for members of a certain generation who spent a lot of time inside watching cheesy comedy movies on VHS, the film’s opening strains of that oldies-radio Coasters classic can rekindle memories as blushed and blurry as those Chet holds of nature’s expanse. And like Chet, it’s impossible not to romanticize the film, despite its apparent flaws. With the right attitude, a messy film because charmingly slapdash, and a next-to-plotless one becomes a stage for comic talents.

And what comic talents. Coming off the goofballery of Spaceballs and saltier, R-rated two-hander Planes, Trains and Automobiles (also written, and directed by, Hughes), Candy’s at everyman top-form in The Great Outdoors. Though the film may feel in places like a cottage-country rehash of Summer Rental (Candy’s Chet is insistent that he not be called “Chester,” perhaps as a nod to his role as the hapless dad Jack Chester in that 1985 Carl Reiner film), The Great Outdoors relies less on open japery and tourist-in-peril plotting. When he’s not being driven up the wall by Aykroyd’s barking loudmouth, Candy seems perfectly at ease lazing in an Adirondack chair in a waffle-cut cardigan. He’s the image of America’s fun uncle a full year before he’d play the loosey-goosey babysitter in Hughes’s Uncle Buck.

Aykroyd, too, has never been better. Despite his more definitive turns in The Blues Brothers and Ghostbusters, Aykroyd’s at his best when he’s playing the heel, in full Bass-o-Matic pitchman form. His Roman Craig is a first-rate A-type creep—scamming a reverend for $25,000 while clipping his nose hair, refusing to BBQ hot dogs for his family because they’re made of “lips and assholes,” and brassily challenging his brother-in-law’s plan rent a pontoon boat to cruise the lake (“What’re you going to do with that thing, Chet? Retake Omaha beach?”). The Chet/Roman tension may be pretty rote (it’s basically an atomized version of Caddyshack’s famous slobs-versus-snobs setup, except the “slob” is just a normal guy), but Candy and Aykroyd pull it off naturally, like two Canadian comics kind of out of place in a Hollywood comedy, just pleased as punch to be riffing on each other.

Never is this buoyant, let’s-put-on-a-show energy better captured than in the film’s closing credits. Here, the entire cast dances to Wilson Pickett’s “Land of 1000 Dances.” The scene tests the ontological boundaries of the film, and of cinema. Are the actors in character? Is this some sort of wrap party? At what juncture does Aykroyd’s sprightly jiving intersect with the narrative proper? And does it? And is it even Aykroyd’s sprightly jiving? Or his character’s? Why is there something instead of nothing at all?

The Great Outdoors has a way of dispelling all these questions, of packaging its ostensible problems not as problems at all, but as virtues. Like a family holiday, like a family, The Great Outdoors is far from perfect, but we like it as it is—perhaps not a great film, but certainly a good-enough movie.