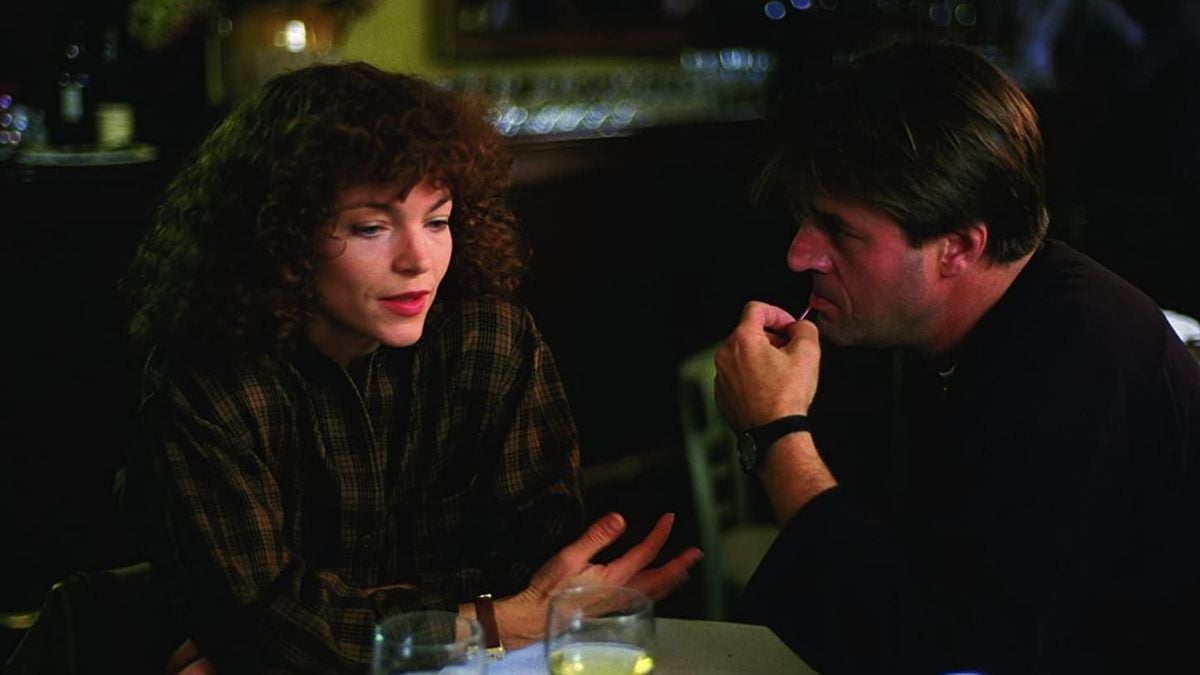 In the closing minutes of Crossing Delancey, Sam Posner (Peter Riegert) asks the one question I would pose to him: “Schmuck, what are you still doing here?” Sam asks this as if he were reading the mind of Isabelle “Izzy” Grossman (Amy Irving), the film’s heroine. In the latest of her transgressions against the man who carries a torch for her, she has shown up hours late for their dinner date. Izzy is stunned to find Sam waiting for her after all this time. She’s late because she was trying to screw another man. Sam’s question is a stroke of screenwriting genius, because I’ve always wondered why the men in female-oriented fare put up with the lead character’s bullshit. Female viewers think the whole “hard to get” thing endearingly leads to a happily ever after. Male viewers—the ones dragged to these movies—look at the screen and assume the guy’s patience will wear out as soon as he gets some ass from the heroine.

I happen to like Crossing Delancey quite a bit, but I’m approaching it as a male viewer. To me, Izzy is a damn fool, and a snob to boot. I wanted Sam to look elsewhere. Throughout the film, Izzy is rather dismissive and mean to Sam, whom she believes is both beneath her station and a plant by an old Jewish matchmaker (Sylvia Miles). Izzy works at a bookstore, dealing with writers and having no time for the marriage her Bubbie (Reizl Bozyk) so desperately wants her to pursue. Since no woman needs a man to define her, Izzy’s rebellion against this traditional notion is commendable. What isn’t commendable is how snooty she is toward a man who works with his hands for a living. The class distinctions are one of the things that make the film fascinating, but its budding romance sticks in my craw.

Let me list the things Izzy does to Sam, and ask if you’d stick around:

1. She invites him on a date for the sole purpose of trying to set him up with somebody else.

2. She invites him to a party at her bookstore, where a writer (Rosemary Harris) recites incredibly shitty poetry about eating a goddamned soft-boiled egg. Sam is mistaken for the writer’s limo driver, which amused me greatly (“Wow, he’s getting the black treatment!” I thought). To Izzy’s credit, she leaves with Sam to spare him any further discomfort.

3. Unfortunately, Izzy’s attempt at continuing this date at her house is interrupted by Nick (John Bedford Lloyd), the married man she’s sleeping with. She ruins Sam’s evening by inviting the guy into her place!

4. The married writer Anton Maes (Jeroen Krabbé), a womanizing pig with whom Izzy is infatuated, seduces her by showing her two pages of his latest work. This occurs on the same night of her big date with Sam. Rather than call Sam to cancel, she tells him to wait for her. She then jumps all over Anton, at least until she realizes he’s banging her in the hopes she’ll become his secretary.

A sane man would drop Izzy like a bad habit. And yet, like a puppy, Sam sticks around. Granted, he’s a pickle man down on Delancey Street, but besides smelling like vanilla (“It kills the pickle smell,” he tells Izzy), there’s nothing unusual or wrong about him. Riegert, a handsome, charming actor, plays Sam in a state of bemusement, which makes dealing with Izzy a tad more palatable for the audience. He can do better, but gamely plays the hand he’s dealt. Screenwriter Susan Sandler provides Sam a quick wit and even quicker means of strategy. When Nick tells Izzy that his wife has kicked him out, Sam cancels Nick’s nookie-filled evening with Izzy by volunteering the extra room in his apartment. “That was a nice thing to do,” says Izzy. “No it wasn’t!” says Sam wickedly. And when Izzy confesses why she’s so late at their final meeting, Sam responds with an idea I’m sure most nice guys have considered: “Maybe if I beat you and treated you mean, you’d like me.”

Irving, who received a Golden Globe nomination for this role, gives Izzy self-awareness and a vulnerability that staves off utter hatred for her character. Director Joan Micklin Silver establishes this in Crossing Delancey’s first scene. Izzy’s close-up as she slowly approaches Maes is a romantic notion immediately smashed by the latter’s response. Irving plays this foreshadowing moment both wounded and wise, yet her Izzy fails to learn the obvious lessons. She’s infuriating, and Irving’s performance acknowledges that.Given Izzy’s bad luck in choosing men, and her chasing away of potential Mr. Rights, one almost starts rooting for Bubbie and Hannah Mandelbaum, the Matchmaker. As the latter, Miles is hilariously garish. Looking like Stevie Nicks reincarnated as an extremely loud Jewish bag lady, the actress’s antics would have blown that Fiddler right off the roof. Miles is fearless, chewing with her mouth open and going after potential customers with the gusto of the best salesmen. She’s such a memorable character that Sam earns a big audience laugh by flawlessly imitating her in one scene, repeating her not-quite-accurate pitches.

As Bubbie, Bozyk is also quite funny; she may be the “Jewish grandmother,” but her concern for Izzy and her smart-ass dialogue transcend ethnicity. When I saw Crossing Delancey at the ‘hood theater in Jersey City, Bubbie was clearly the audience’s favorite character. That a small, niche film such as this could play the ‘hood theater, not to mention that a bunch of teenage urban dwellers could find this peek into a different world compelling, is proof that if you show something new and different, audiences might enjoy it. And why wouldn’t we? Bubbie isn’t much different than any grandmother, black, Jewish, or otherwise.

Crossing Delancey is unafraid of its ethnicity and its New York City flavor. Silver, who directed the superior Carol Kane-starrer Hester Street, focuses on Jewish characters, but unlike Woody Allen’s movies, the appearance of other ethnicities doesn’t feel like out-of-place stunt casting. This is the Lower East Side. I fully believed that Izzy and her girlfriend would go to a gym where, in the sauna, they’d hear a black woman deliver the most explicit blowjob description ever allowed in a PG-rated film. When minority faces show up on the fringes of some of the bookstore party scenes, it felt real. I’ve been the only black person at a lot of arty functions, especially back in 1988 when Crossing Delancey was made.

As far as depicting those arty functions, I’m not convinced I’m supposed to take them seriously. I think they work either way, but I’m sure I detect mockery in these scenes. The poetry spouted by Krabbé and Harris is hilariously awful, as is a strange TV clip featuring a woman dancing around wearing an outfit consisting of fake human hands and arms. Izzy feels so privileged by being part of these events, but they’re so loony she should be ashamed for thinking herself better than a man who makes something useful.

Bubbie eventually gets what she wants in Crossing Delancey, but the fate of Sam and Izzy is still left somewhat ambiguous. One can assume they’ll wind up together forever, but as they walk off screen to a song provided by the Roches, I’m not sure if Hannah Mandelbaum will get her money. The film will do nothing to change the standard male perspective on women’s pictures, but it does provide infinitely more character color and depth than anything starring Katherine Heigl nowadays.

Interview: Wong Kar-wai on The Grandmaster