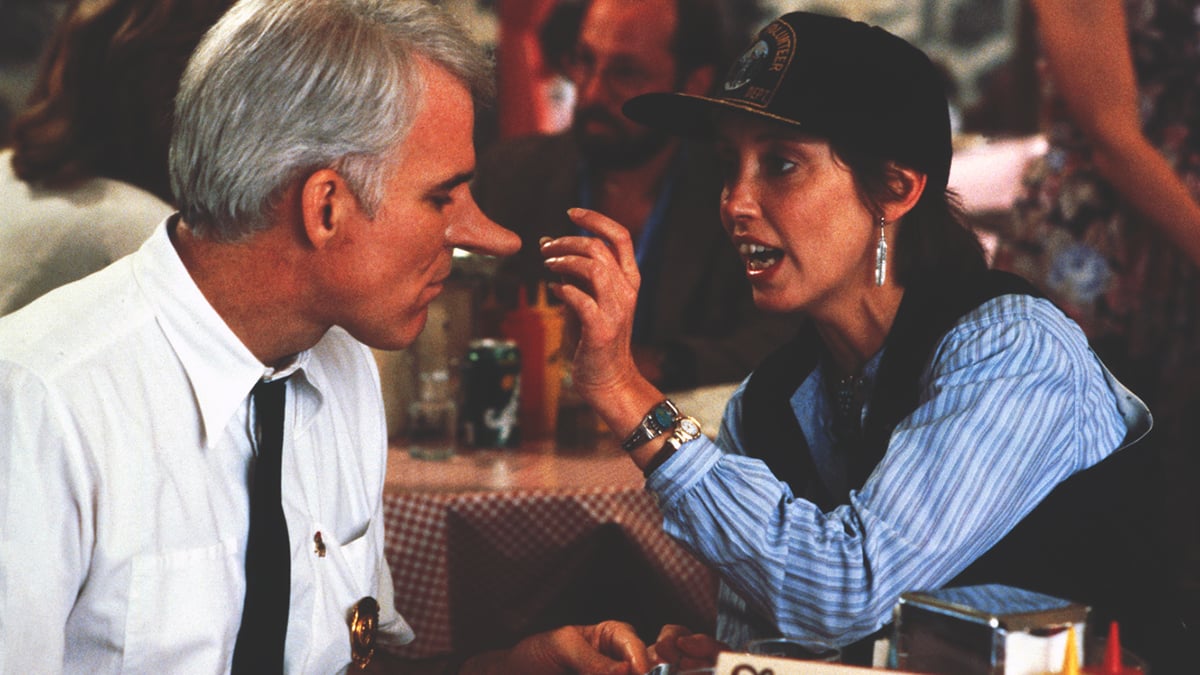 Steve Martin’s Rostand adaptation, Roxanne, came out the year after I read its source material. During my senior year of high school, my English teacher, Mr. Kilinski, assigned us Cyrano de Bergerac. Some of my classmates opted instead to watch 1950’s Oscar winner Jose Ferrer as Cyrano. Most of us knew by now that our teachers asked exam questions designed to trap students who substituted film for book. I’ve never seen Ferrer’s version, so I can’t vouch for its faithfulness, but I’d warn any student reading this against using Roxanne as a substitute for Rostand. Mr. Kilinski’s test asked us “what is the eventual fate of Cyrano?” If Roxanne were your only brush with de Bergerac, you were about to fail this exam.

Read the damn play. Because after you do, you’ll appreciate all the more how Martin’s screenplay transforms it, paying homage to its most famous sequences as well as some obscure passages. The screenwriter has definitely read Rostand, absorbing his verse and bending it the way Martin’s white-suited comic persona twisted balloon animals. Martin plays C.D. Bales, chief of the fire department and the most popular figure in the sleepy, beautiful mountain town of Nelson, Washington. Nelson, which is real and located in British Columbia, looks too beautiful to exist. Nestled in the Pacific Northwest’s mountains it’s Shangri-La minus the horrible Burt Bacharach songs from Lost Horizon. Such preternatural beauty only accentuates its most popular and unconventional sight: C.D.’s proboscis.

Mirroring de Bergerac, C.D. has a big nose. Martin, like his predecessors, wears a huge, fake affair. That we come to accept it as real is a testament to Martin and Schepisi. During the opening credits, C.D. is seen from afar, rendering his facial features unclear. Schepisi and cin-togger Ian Baker reveal C.D’s nose in garish close-up, turning it toward the camera in a stunning 3-D recreation. The gasps on the soundtrack echo those from the audience. “The Lord giveth,” says C.D. at one point, “and He just kept on giving!”

C.D.’s first close-up is in response to two bullies (one played by SNL alum, Kevin Nealon) commenting on the elephant in the room. In a nod to Cyrano’s dexterity as a duelist, C.D. battles his foes in a faux swordfight featuring golf clubs and tennis racquets. Martin jousts with comic deftness—maybe that’s what C.D. stands for—treating his body as a metronome for a symphony only he can hear. He never stops moving in the film. His fleetness of both foot and tongue (C.D. is a master wit) compensate for that big ol’ schnozz of his. It’s motion as defense mechanism, delivered by Martin as comic grace under pressure.

Nelson’s residents love C.D. He’s big man on campus and a local celebrity. Into his sleepy haven come two distractions. One is Rick Rossovich’s Chris—or Christian as Rostand called him—recruited to help whip Nelson’s bumbling volunteer firefighting team into shape. The other is Daryl Hannah’s pretty grad student-slash-rocket scientist, Roxanne. The red light she’s putting on involves space exploration, tagging her as the kind of brainiac that terrifies dumb men. Chris is a dolt who got twice the hunkiness but half the brains during his creation. When he casts eyes on Roxanne, his loins practically explode. But after seeing her verbally eviscerate a guy who hit on her, Chris is unable to speak to her. Roxanne sees Chris, and though she may be smart, she’s also human. Her attraction is immediate, but she can’t seem to engage him in conversation. Rossovich’s comic blundering as he evades his object d’amour lends his lovable lug some extra charm.

Like Chris (and Cyrano for that matter), C.D. is smitten with Roxanne. He is unafraid of her quick wit, but mortified of what she might think of his nose. Since C.D. is Chris’ boss, Roxanne enlists his help in bringing them together. The tongue-tied Chris also begs C.D. for help wooing Roxanne, who apparently wants a man who looks like Chris but sounds like C.D. Masochist that he is, C.D. agrees to help.

Chris starts talking to Roxanne, parroting whatever C.D. says in his hidden earpiece. This plays as a comic goldmine. As in the supposed Mae West line-feeding story on the set of Sextette, the signals get crossed and Chris starts repeating calls from the police radio. (West allegedly said, in her sultry voice “there’s a five car pile-up on the 405…”) Without his safety net, Chris’ poetry abandons Walt Whitman for Andrew Dice Clay. The evening is saved when, in the darkness under her balcony, C.D. verbally seduces Roxanne. As Chris runs into Roxanne’s house, C.D. triumphantly says “I did it!” before realizing his error: He did it, but he won’t be doing it with Roxanne. “Shit!” he says with resignation.

I read Cyrano de Bergerac at the perfect time. I was a senior in high school, a time when one is still conscious of one’s body faults. Making matters worse, I was one year removed from being blinded in one eye, and the results were (and still are) graphically rendered on my face. I identified with Cyrano more than any other character I came across in high school lit class, because I always considered myself a great wing man but a lousy scorer. When I recently reread Cyrano de Bergerac, my love for it remained but I realized it was a piece of masochistic malarkey. Spoiler ale—oh fuck that, you should know this already—Cyrano dies without ever getting to experience the love of Roxane. (That’s not a typo. This is how Rostand spelled the name!) Such poetic self-sacrifice! How did I ever buy into this bullshit?

Thankfully, Roxanne doesn’t wallow in misery. Martin’s script and his performance allow fleeting moments of genuine pathos without ruining the film’s comedic tone. When Roxanne tells C.D. she’s enamored of a guy in town, C.D. thinks he’s the lucky guy. After Roxanne describes her man as “handsome,” thereby eliminating C.D. from the suspect list, Martin plays his heartbreak with a devastating, stinging brevity. And when Roxanne discovers she’s been tricked by both C.D. and Chris, rather than emotionally break down, Hannah provides a glimpse of the Elle Driver she’d become 16 years later in Kill Bill. Her physical response is the funniest moment in Roxanne.

Roxanne is elevated by some fine supporting turns. The fire department volunteers, which include Michael J. Pollard, Fred Willard and Damon Wayans, are a nice blend of comic incompetence in dire need of heroic redemption. C.D.’s best friend Dixie is a low-key, refreshingly tomboyish Shelley Duvall. Her betrayal of C.D., which she does for his own good, would play differently without Duvall’s gentle rendering. And despite her actions, Shandra Beri remains likable as a more appropriate match for Chris.

Martin’s script, which deserved Oscar consideration, makes clever reference to its source material while also explaining why C.D. just doesn’t have a nose job. There’s a subtle reference to Rostand when C.D. suddenly falls out of a tree in front of some old ladies, concocting an unbelievable story about sex-crazed space aliens as an excuse. Far more blatantly, Martin gives us an inspired rehash of the play’s best verses. When insulted, Cyrano immediately improvises infinitely more clever insults his foe could have used. Martin gives C.D. the challenge of coming up with 20. I wondered how improvised this scene was, for it’s a limber, exceptionally funny stand-up routine. “It must be great to wake up and smell the coffee…in Brazil,” C.D. says to his enemy at the bar. The onscreen audience is rooting for him, as are we. For once, here’s a movie where the “ugly guy” gets the girl. Hope springs eternal.