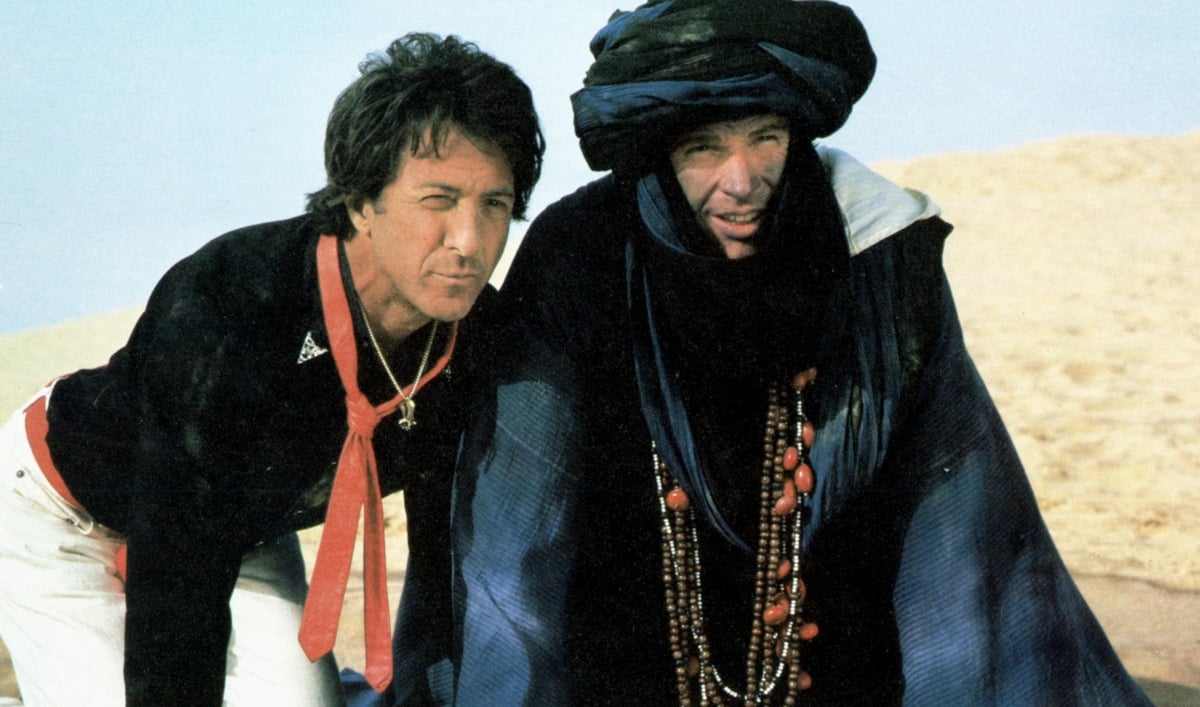 Here’s a conspiracy theory for you: Ishtar is intentionally terrible. Director Elaine May, one half of the team that founded American improv, is too smart a writer to be this unintentionally inept. Numerous lines and gags support this notion, and the almost universally reviled Ishtar plays like a career suicide note. Here is a writer who no longer wants to direct, so she constructs a bomb with a self destruct sequence initiated by the equipment projecting her movie. This “goodbye, cruel world” aims to be a clever kiss-off à la George Sanders; instead it’s closer to Delroy Lindo’s famous graffiti in Spike Lee’s Clockers: “Bitch, you is dead.”

“You’re old, you’re White, you got no shtick,” says Jack Weston’s agent to Ishtar’s two leads, songwriters Rogers and Clarke (Warren Beatty and Dustin Hoffman, respectively). He’s describing their singing act, but he may as well be describing their performances. Clarke is a neurotic who fancies himself a hit with the ladies, yet is revealed to be desperate enough to take a gig in a war-torn North African country. Rogers is a schmuck who can neither say “schmuck” nor get a woman despite looking like Warren Beatty. Tootsie proved Hoffman can be believable taking extremely desperate measures. Bulworth confirmed that Beatty can effectively milk the “hey, look! It’s Warren Beatty doing stupid shit we never thought he’d do!” factor. Ishtar puts both in similar situations, but May’s script and direction treats them like collateral damage: They’re pulled down with her intentional recklessness. Not for nothing does she place her actors on a ledge in a botched suicide attempt. This is your symbolism dollars at work, folks.

As proven by the recent documentary, Paul Williams Still Alive, Paul Williams is a very talented man who deserves better than the movie with which he is involved. Williams provides the horrendous songs created by Ishtar’s songwriting duo, and it takes true genius to write something this bad. Williams and May craft songs about love taking place in wardrobes, hot fudge and with a girl whom the singer hopes is not his daughter. The montages of song snippets are endless, with Hoffman and Beatty singing the purposely terrible and extremely unfunny lyrics. “Tellin’ the truth can be a dangerous business,” they warble. “Honest and popular don’t go hand in hand.”

By itself, the story of two songwriters who pen atrocious lyrics might have worked. Rogers and Clarke could have gotten some hip hop beats, better singers and/or Auto-Tune and taken over the airwaves. But that would have been funny, therefore violating my theory that Ishtar’s quality is as intentional as its songs. For shits and no giggles, May’s script adds a “parody” of U.S. Middle Eastern foreign policy. Weston’s smarmy agent attempts to book our heroes in a nightclub in Ishtar, a North African country in cahoots with Khadafy. Facing depression after being dumped by Tess Harper and Carol Kane (the latter sends Hoffman and Beatty to that symbolic ledge), Rogers and Clarke run to Ishtar, where both men hope their act will reach the heights of Simon and Garfunkel.

In Ishtar, the duo run into acclaimed French actress Isabelle Adjani, whom they both mistake for a boy. As Shirra Assel, she wants to overthrow Ishtar’s emir, but her plans are so haphazard they could never work. Adjani is as unconvincing in her role as a freedom fighter as she is in her mistaken male identity, yet both identities are more believable than her plotline. Assel’s brother has found a map that foretells of the emir’s downfall at the hands of “two messengers from God.” Cut to Rogers and Clarke landing in Ishtar, where the latter trades identities temporarily with Assel after she shows him a 2 second boob flash. Good titty will make you give up your passport, but superior titty will send you into a partnership with the Central Intelligence Agency. Unbeknownst to Rogers, Clarke gets involved with Charles Grodin’s C.I.A. agent, a man who wants to capture Shirra Assel to stay on good terms with Ishtar’s emir. Unbeknownst to Clarke, Rogers gets involved in trying to help Assel after he thinks she’s a boy and she kisses him. Good boy kisses will get you to buy a blind camel who spends its entire screen time making a noise best described as the perfect reason for murder. Superior boy kisses will get you and your noisy Stevie Wonder camel sent to the desert to die.

Banished to the desert for reasons not worth explaining, Rogers and Clarke deal with the Sun, sandstorms and some overzealous vultures. The buzzards provide Ishtar with its one laugh, which I’ll conveniently spoil for you. When Rogers explains that the vultures are present because they thought Clarke was dead, Clarke responds “oh, they’re on spec?” Trust me, it’s funny.

Ishtar has been described as a hat tip to the old Hope and Crosby Paramount Road To… pictures from the 1940’s. They weren’t funny either, but at least they had the good sense to be shot on a set and let their actors wink at the audience. Ishtar is shot on location by Vittorio Storaro and pitched to the viewer as an actual plot, not a series of jokes. The location shooting was costly, especially when (rumor has it) the director flew in steamrollers to flatten the desert where she was shooting. Ishtar cost $55 million dollars to make, which wouldn’t turn a head nowadays, but the percentage of cost it recouped would send those same heads into Exorcist mode.

May took months to edit Ishtar, and if my theory holds water, she kept saying to herself “dear God, this isn’t bad enough!” before each re-edit. Even so, Ishtar’s reputation as being hated by all critics at its time of release is untrue. Pauline Kael said it “certainly isn’t dislikeable; you observe the fine touches,” and Sheila Benson damn near exploded with glee. “Elaine May has created a love letter to show biz dreamers and called it Ishtar,” she wrote. “It is a smart, generous, genuinely funny affair.” Benson’s Ishtar review is funnier than Ishtar, especially when she refers to Hoffman’s offensively rendered attempt at speaking Arabic as having “a Danny Kaye-like dexterity and command.” Danny Kaye must have been spinning in his newly-dug grave.

May never directed another movie after Ishtar, but her writing career continued to thrive with films like Primary Colors and The Birdcage, both superb adaptations. But lest you think I’m talking out of my ass vis-à-vis my notion May intended Ishtar to be dreadful, I submit one final piece of evidence. As Hoffman and Beatty perilously step their way across Hoffman’s building ledge en route to safety, Beatty tells Hoffman Ishtar’s thesis statement. Looking into Hoffman’s eyes, producer Warren Beatty says “you’d rather have nothing than settle for less.” Anyone can write a bad movie. It takes a genius to write something this terrible, and Elaine May is certainly that. She did this shit on purpose.